Over the last few days rumors have been sprouting all over the internet that AMD is planning to give a green light to all manufactures to launch 8GB R9 290X GPUs. Now we have the evidence that this will be the case a VideoCardz has leaked an image of MSI's 8GB R9 290X. 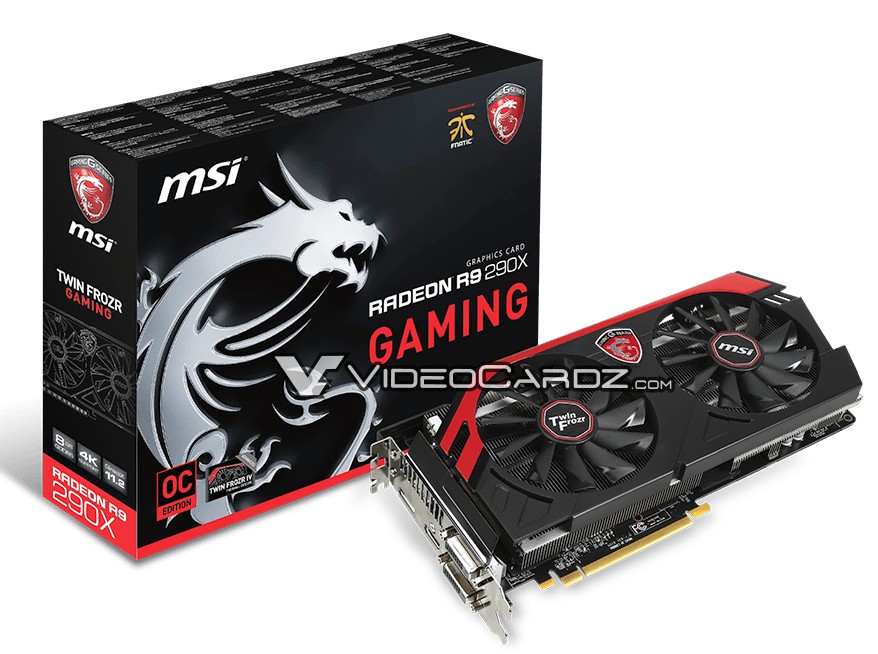 Looking at this 8GB model we see that the MSI R9 290X GAMING 8GB looks exactly the same as the older 4GB model. The only way you can determine whether you are looking at 4GB or 8GB model of the GPU is the packaging, where it clearly states the size of the frame buffer. Both models are equipped with the same backplate and the same cooler, so sadly we will not see MSI's newer Twin Frozr V cooler on the R9 290X.

Exact specification remain unknown apart from the size of the frame buffer. AMD may decide to bump up the clock speeds of these models in order to better combat Nvidia's Maxwell based GTX 900 series. Videocardz suggest that Nvidia is planning to release 8GB GTX 900 series GPUs in order to combat AMD 8GB cards, but this remains unconfirmed.

What do you guys think of 8GB GPUs? Do you think it is entirely unnecessary or required in a world with modern consoles that sport 8GB of ram? Join the discussion on the 8GB MSI R9 290X on the OC3D Forums.

Dark NighT
I would agree, i dont find it necessary to slam 8gb on that card.Quote

barnsley
It makes sense in quadfire/trifire setup for UHD but apart from that,ehh.

Thelosouvlakia
Sapphire had their 8GB cards "limited" edition...
Now that competition starts making 8GB cards they will have to make an "unlimited" exition xD
Also with the 290x still beating the crap out of the 980s in 4K this will be an attempt to keep the 290x the king of 4K for a little more whileQuote

Zinc64
8GB only makes sense for Crossfire/SLI...no point if you're only buying a single card.