At CES 2015 MSI has shown off two new models of Nvidia's GTX 970 GPU and the guys over at PC Perspective have snaped some lovely photos of them.

The first of these two GPUs is the GTX 970 Gaming 100ME, which stands for 100 Million Edition. This GPU is an Nvidia Themed GPU which has been made to show off the fact that MSI has build and sold 100 Million Nvidia GPUs. This GPU isn't just a GTX 970 with a different paint job, but this model has a full cover back plate and willl also ship with what MSI call a "Special Gift". 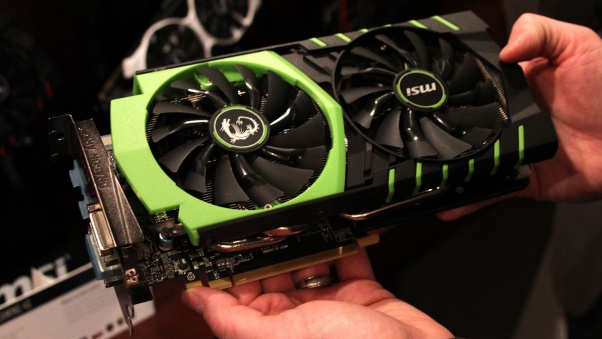 (Images from of PC Perspective)

The second new model of Nvidia's GTX 970 from MSI is a value GTX 970, which sports a block and white cooler which looks very similar to MSI's older designs. This GPU looks like it will be at home in MSI's Krait line of products, so users looking for a GPU with White accents will need to look no further.

(Images from of PC Perspective)

MSI did not give PCPer an ETA for either of these GPUs, we expect them to arrive in the next few weeks or months.

You can join the discussion on the MSI's two new GTX 970 GPUs on the OC3D Forums.

Dicehunter
I like MSI's designs, Their power motherboards always remind me of JCB's though

AverageNinja
Now if MSI would also start making green motherboards, I know what I would spend my salary on

In all seriousness though, those cards are looking great. Especially that green one.Quote

Feronix
Both of those would look amazing in my system... HmmmQuote

Dark NighT
I dont really like that krait edition, i think it looks a bit to cheap, but it should perform just right anyway.Quote