This GPU is pointless...

Over the past number of weeks, GTX 1060 graphics cards with GDDR5X memory have started to appear from most major GPU manufacturers, offering the potential of increased memory clock speeds and higher levels of performance than their standards GDDR5-based counterparts.

At launch, Nvidia's GTX 1080 released with 10Gbps GDDR5X memory and was later available with faster 11Gbps memory, representing a significant increase over the 8Gbps that most GTX 1060 6GB graphics cards offer. What's disappointing is that AIBs don't seem to be taking advantage of this increase in potential memory throughput, especially MSI.

MSI's GTX 1060 Armor 6GD5X OC has appeared online, sporting GDDR5X memory and the same core clock speeds as its GDDR5-based counterpart, the GTX 1060 Armor 6G OCV1. So what does GDDR5X offer? Absolutely nothing, it's clocked at the same speeds as GDDR5, making the entire exercise pointless from a performance standpoint.

What we see with this new GDDR5X-based design is a PCB that appears to be identical to MSI's GTX 1080 Armor graphics cards, featuring SLI fingers and the same 8+6-pin power configuration, notable changes from the normal GTX 1060 Armor, which lacks support for SLI and uses a single 8-pin PCIe power connector. The SLI fingers on this GPU's PCB are likely unusable, as the GTX 1060 isn't supposed to support SLI/Multi-GPU gaming.

Another factor to consider here is that MSI's GTX 1060 is likely to feature increased overclocking headroom, especially on the memory side. Most GDDR5X-based graphics cards run at 10Gbps, making it likely that this 8Gbps GDDR5X graphics card has a lot of untapped potential. The use of what appears to be a GTX 1080 PCB design and cooler could also be useful when it comes to keeping this graphics card cool and quiet while overclocking.

Update - MSI has informed us that while the graphics card is listed with a power consumption specification of 120W, their GTX 1060 Armor 6GD5X OC will feature a higher boost clock power limit, increasing its performance over a normal GTX 1060 6G OCV1. We have also been told that the GPU's memory stats may change. 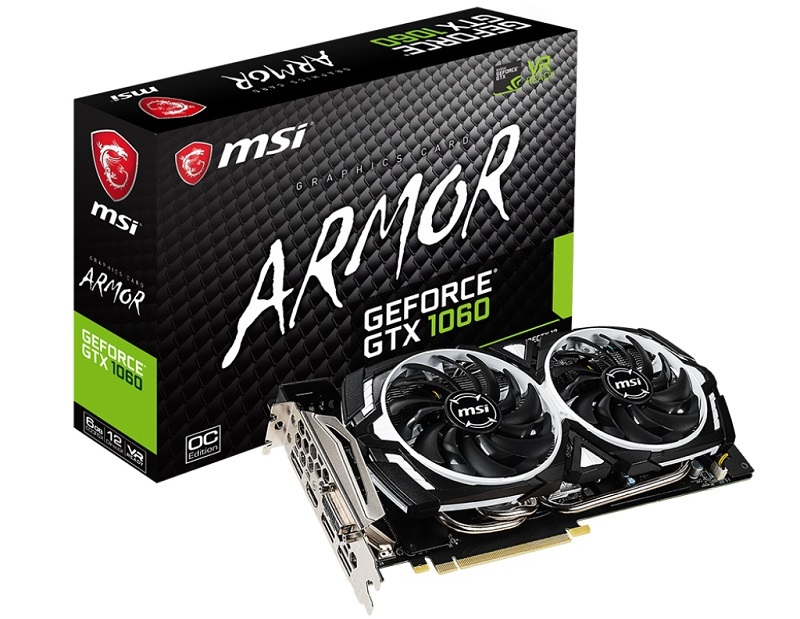 What we have here is a graphics card that serves no purpose. It doesn't innovate Nvidia's mid-range lineup or appear to offer any substantial advantages over MSI's other GTX 1060 graphics cards. This appears to be nothing more than an attempt to ship remaining GDDR5X inventories, rather than a push to compete with AMD's recently released RX 590 series graphics cards.

You can join the discussion on MSI's underwhelming GTX 1060 GDDR5X graphics card on the OC3D Forums.

AlienALX
I can't see any traces on the SLI fingers.

I think Nvidia originally gave the go ahead, but then cancelled it because they are greedy assholes. So the design would have incorporated the fingers and I guess it was too costly for MSI to go back and change the design/order.Quote

tgrech
I don't think that's the reason, chances are this is a 1070/1080 reference board design with the minimal changes necessary in the printed circuit layout to accommodate the 1060 chip. GDDR5X has more pins and a lower voltage than non-X and gains most of the performance by allowing a quad-data rate mode with larger prefetch. Essentially it's a more efficient but more expensive(Wider) design, so presumably these chips were going to be written off otherwise. There's a chance the memory controller on some of the 1060s weaker chips is a limiting factor to boosting speeds beyond original spec, though these chips should have a small power reduction & possibly better OCing potential.Quote
Reply