Prepare for the Ti!

Thanks to Videocardz, an image has emerged online of Nvidia's upcoming RTX 3080 Ti graphics card, an MSI SUPRIM X model. This image was reportedly taken at a distribution centre, and sadly the box for the graphics card does not identify any of the graphics card's specifications.

If this image is legitimate, Nvidia and their AIB partners already have RTX 3080 Ti graphics cards ready to ship, which makes sense given the graphics card's rumoured mid-May/early-June launch date.

Until launch, Nvidia is presumably working on increasing its initial supply of RTX 3080 Ti graphics cards, though it remains likely that these graphics cards will sell out within hours of their release (if not minutes).

Cooling-wise, MSI's RTX 3080 Ti SUPRIM X appears to feature the same heatsink and PCB design as its RTX 3080 and RTX 3090 counterpart, which makes sense given its use of Nvidia GA-102 silicon. This cooler should be more than enough to keep Nvidia's latest graphics card cool under load.

Nvidia's RTX 3080 Ti will reportedly feature 12GB of GDDR6X memory, offering gamers a 20% increase in memory capacity and bandwidth over the company's RTX 3080. Add on the RTX 3080 Ti's additional CUDA cores, and Nvidia has a graphics card that's capable of delivering gamers a significant performance uplift, especially in games where memory bandwidth is a critical factor. 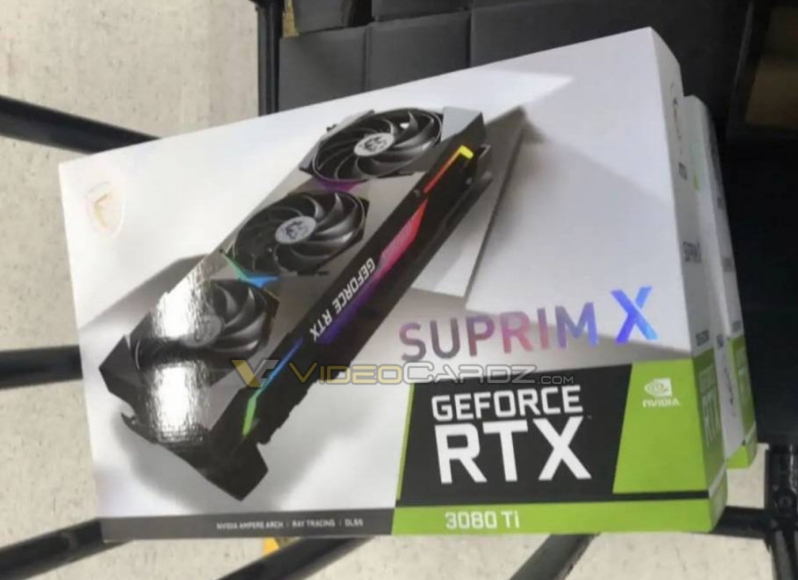 Nvidia's RTX 3080 Ti is also due to ship with Resizable BAR support out of the box and with Nvidia's new Hash Rate Limiter, which should make this graphics card less appealing to cryptocurrency miners.

You can join the discussion on MSI's RTX 3080 Ti SUPRIM X graphics card on the OC3D Forums.

Warchild
in time for Xmas I guess.Quote

Dawelio
Mark, clicking the link only opens up the actual image in a new tab.Quote

Warchild
Quote:
suprim is a medicinal supplement or similar.Quote