Value is returning to the GPU market

It's finally happening. Value is returning to the GPU market. GPU prices are getting lower, and some GPU models are now starting to sell below their official MSRPs.

Today, we have found that MSI's Radeon RX 6600 MECH X2 is now selling for £289.99 (at Overclockers UK), below AMD's official UK MSRP of £299.99. Yes, £10 may not be a big discount, but it wasn't long ago when graphics cards at MSRP were considered mythical creatures.

Thanks to multiple factors, graphics cards are becoming more readily available at retailers. This applies to both new graphics cards and sales from second hand reselling sites. This has allowed graphics card pricing to normalise, allowing PC builders to purchase graphics cards at reasonable prices.

For buyers that are willing to shop around, some great GPU deals are now available. This is especially true within the mid-range market. That said, many graphics cards remain available at inflated prices. 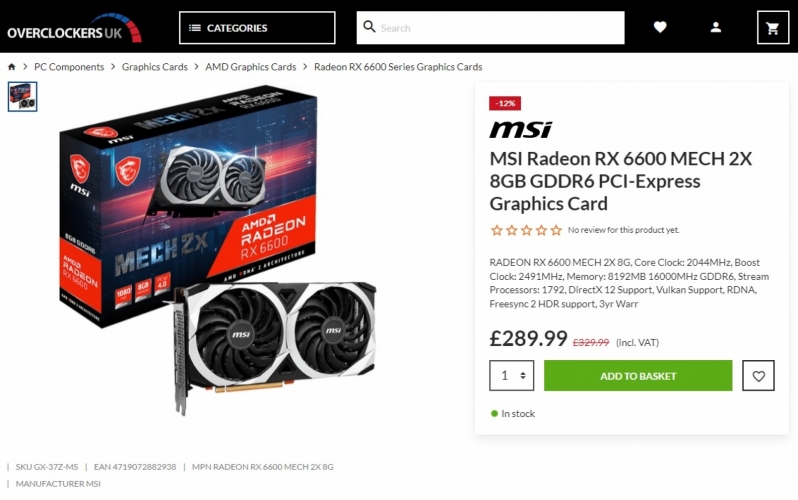 The return of value

The past two years have been a bad time to be a PC gamer. GPU prices had gone through the roof, and it was almost impossible to build a new gaming system without first selling a few organs or getting into debt. Gamers with moderate incomes simply couldn't upgrade their PCs, leaving the PC gaming market to stagnate. For the most part, only the uber wealthy were able to afford high-end gaming PCs, and that was not healthy place for the PC market.

Thankfully, the PC market is returning to normal. The popularity of cryptocurrency mining is waning, and many graphics cards can now be purchased for reasonable prices. That said, it remains to be seen how things will go when AMD launches their Radeon RX 7000 series and Nvidia releases their RTX 40 series. Let's hope that scalping and hardware shortages affect these next-generation product launches.

You can join the discussion on AMD's Radeon RX 6600 becoming available below its official MSRP price on the OC3D Forums.

Piskeante
in Spain, because PCcomponentes is the greatest scalper here, it's at 399 even after an "11% discount".
Spain is really ed up in prices. What a disaster.Quote

Avet
Can you order from UK or Germany? I don't think shipping will be expensive. At least not as the cards in shops.Quote
Reply