Will Navi just be another GCN architecture?

AMD has started to push out the first few hints of Navi into their Open-Source Radeon drivers, paving the way towards next-gen Navi graphics support. In AMD's latest driver commits, references to "gfx1010" have been uncovered, hinting at a 10th generation graphics architecture that will succeed AMD's 9th Generation Vega microarchitecture.

One specific reference has been sparking some controversy amongst hardware circles, with references to "EF_AMDGPU_MACH_AMDGCN_GFX1010" suggesting that Navi will be another iteration of AMD's GCN architecture, leading to comments on Twitter and Reddit which claimed that Navi was "Dead on arrival", or will otherwise be underwhelming.

This leads to an obvious question. Does it matter if Navi is another iteration of AMD's GCN architecture? The answer is more complicated than a simple yes or no.

So does it matter that Navi is still a GCN part? Not really, remember that both AMD and Intel still build processors that are based on the x86 instruction set. A lot of hardware/architectural changes can take place while retaining the same instruction set. The same thing also applies to Nvidia, whose architectures have seen significant changes over the years, but at their core remain very similar to what came before. Nobody complains when they hear that Nvidia's next-generation offerings will continue to use CUDA cores...

Does AMD need to create a new graphics ISA (instruction set architecture) to make Navi a big improvement over Vega? No, there are many ways to skin a cat and AMD likewise has many avenues that can be explored to improve the performance of their graphics cards. 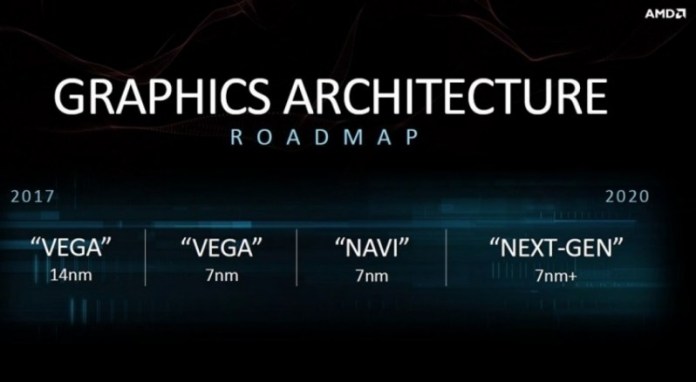 If you want to complain about Navi being another GCN-based architecture, you must remember that AMD can make some sweeping changes with Navi and still call itself a GCN graphics card. At this time relatively little is known about AMD's Radeon Navi architecture, but we do know that it will power the next generation of high-performance consoles. As such, Navi will likely include major improvements that will come thanks to what Radeon has learned through working with both Sony and Microsoft on today's PlayStation and Xbox consoles, as well as their enhanced Pro/X variants.

We should expect to learn more about AMD's Radeon Navi architecture later this year, likely at Computex and E3 2019, with a release that will likely occur in Summer 2019. Navi may be a GCN-based graphics card, but that doesn't mean that their new architecture can't be a major improvement over Vega.

You can join the discussion on AMD's Navi architecture continuing to be GCN-based on the OC3D Forums.

grec
Let's not forget that modern Intel processors can trace their architecture's heritage back to the 1995 i686/Pentium Pro, which was slightly iterated upon to form the basis of Intel's Core architecture in 06(After a long and eventually painful affair with NetBurst), with the Pentium M processors keeping the architecture on life support in between, and has evolved in steps from there ever since.

There has to be serious problems with an architecture before it's worth scrapping decades of development and billions of dollars worth of R&D. You never really get ground up redesigns nowadays.Quote

WYP
Quote:
Exactly. Just because Navi is GCN doesn't mean that it can't be good. A lot can change over time without a full redesign.

Naysayers who are commenting that Navi is DOA because of GCN are missing the point entirely. It's like saying that Turing is DOA becouse it can be traced back to Fermi...

I'm not saying that Navi is guaranteed to be amazing, just that the articles and poster who are dismissing the whole thing because of GCN driver references are a little deluded.Quote

grec
Yep and somewhat ironic when many of the changes that were made to Turing vs Pascal were to give it a more GCN style core/cache layout & feature set. GCN was a very forward looking architecture that has arguably laid the foundation for every modern GPU arch, including Intel upcoming ones by the looks of it. To scrap it just as the fruits of those long term bets pay off would be insane, whatever they call the successor to Navi(And no, they won't call it Arcturus) it will bring many of GCNs concepts forwards.Quote

ImprovizoR
Ultimately, it's the final product that matters. Pascal was called Maxwell on steroids and I remember people being excited for it like it was a breakthrough.Quote

WYP
Quote:
TBH I find it strange that GCN has such a bad name in some circles. TBH Nvidia did well saying nothing about their GPU instruction set, that way they have none of these complaints.

GCN is a great architecture, but ultimately it is hard for AMD to take on Nvidia after the lead they gained with Maxwell. The older GCN cards have aged very well, especially the R9 290 series. You are right when you say that Turing is Nvidia with an AMD-like twist.


Quote:
Exactly, TBH what AMD needs is a Maxwell moment, an architecture shift that reduced power consumption and enabled a huge increase in clocks.

While Nvidia ultimately failed in the mobile SoC game, aside from the eventual design win with the Nintendo Switch, the focus on mobile and power efficiency really helped them get the most perf/watt in the desktop space. Features like their tile-based rasteriser also helped them with memory bandwidth, which means that they didn't need to go HBM like AMD did with GPUs like the GTX 980 Ti.

I really hope that Navi is AMD's Maxwell moment, as that would change the game for both PC graphics and next-gen consoles. It would make for a very exciting future for gaming.

There was those features with Vega that never quite panned out like the Primitive shaders, which could be a big deal if they are working in Navi. Who knows. It's not like AMD is talking much these days about architectural features.Quote
Reply