Nvidia has announced that they will be bringing their Geforce Now subscription service to PC, allowing anyone with a decent internet connection to get into PC gaming.
This service will deliver PC gaming on demand, with a release date in March 2017 for early adopters with a price of $25 per month for 20 hours of gameplay.
Geforce Now will give gamers access to a gaming PC in a Pascal GPU farm, giving them access to storefronts like UPlay, Origin and Steam, allowing users to access their own accounts on these services and play their own games. This means that this $25 per month service will not come with any free games or a built in games library, which will be a dealbreaker for some. 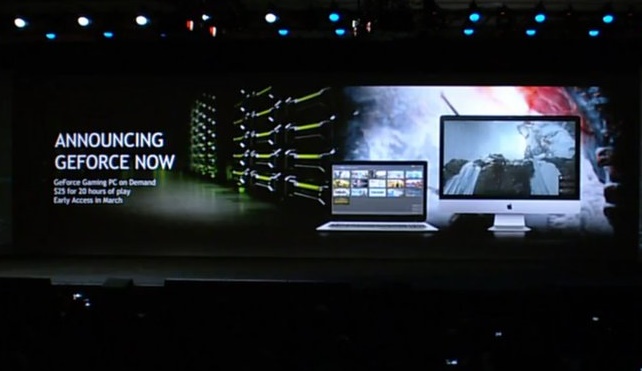 Right now Nvidia has not released the PC system/bandwidth requirements for this service, though it is worth noting that this service offers terrible value when compared to competitors like PlayStation Now, which costs £12.99 per month in the UK and has no usage limits and has a free library of games for its users.

We will update the information included in this article as we learn more.

You can join the discussion on Nvidia's Geforce Now service on the OC3D Forums.

SeekaX
Quote:
Lol, no thanks. Also does that mean they intend to raise the price in the future? Nvidia you may be able to slap premium prices on your products because you have no competition for over half a year, but you have plenty of competition in the online games library segment. I don't even know who their target audience is, people in their late twenties with a demanding job and three kids at home?Quote

Daft Behemoth
They don't even meet the $1/hr requirement...Quote

TheF34RChannel
I have no software subscriptions at all and not about to start. Preposterous Nvidia!Quote

SuB
So this is the streaming service? similar to the now extinct onlive service?

I can see why it would cost more (you're paying for the hardware it's being run on afterall) but that's still hellishly expensive...Quote
Reply