With their latest Geforce graphics card drivers, Nvidia has certified seven new G-Sync Compatible displays, this time coming from a range of manufacturers which include ASUS, Acer, AOPEN, Gigabyte and LG.

Nvidia's G-Sync Certified Adaptive Sync monitor essentially makes up Nvidia's "best of the best" list of VESA Adaptive Sync displays, functioning without artefacts, flickering, blanking or other major issues. Nvidia also requires G-Sync Compatible monitors to offer a VRR range of at least 2.4:1, which for a 144Hz display means that a VRR range of at least 60-144Hz is required.

Below is a list of the seven new displays that have been added to Nvidia's G-Sync Compatible lineup;

Perhaps what's most noteworthy is that some of these new monitors do not use TN screens, which was a factor that has been common to all of Nvidia's other G-Sync Compatible displays so far, with Gigabyte's Aorus AD27QD, which features a 10-bit IPS panel, gaining G-Sync Compatibility. Our review for Gigabyte's Aorus AD27QD HDR FreeSync monitor is available to read here. 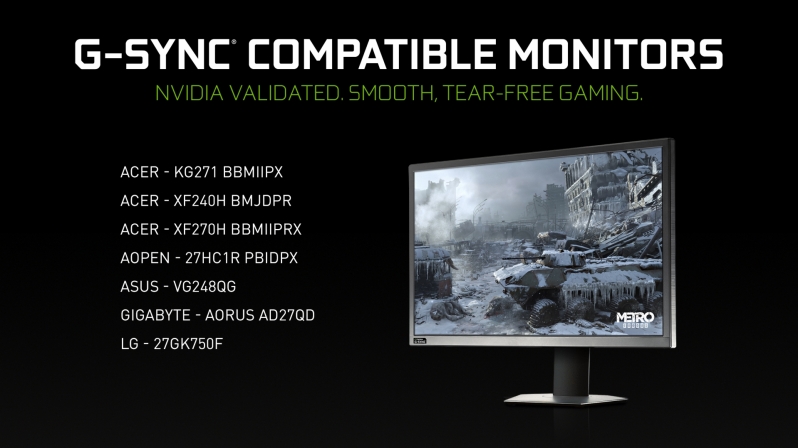 Nvidia has realised that the expense of their G-Sync monitors has handed control of the variable refresh rate display market over to AMD, giving budget gamers more reasons to buy displays and graphics cards from their competitors. With Intel planning to jump on the variable refresh rate bandwaggon with VESA Adaptive Sync support, Nvidia needed to follow suit eventually, as otherwise, they would be handing their competitors key advantages in the gaming space.

Creating their G-Sync Compatible certifications allows Nvidia to adopt VESA Adaptive Sync while cementing in the eyes of consumers that G-Sync is the superior Variable Refresh Rate standard, and while some will call this marketing BS, it is hard to deny that Nvidia's certification efforts are helpful for consumers, as Nvidia is basically branding the best Adaptive Displays on the market as "G-Sync Compatible", which is useful information for all PC gamers.

You can join the discussion on Nvidia's seven upcoming G-Sync Compatible Monitors on the OC3D Forums.