Nvidia earns more from Datacenters than Gamers for the first time

Nvidia earns more from Datacenters than Gamers for the first time

Nvidia's now a lot more than a simple gaming company. Today, data centers are Nvidia's new bread and butter, generating for then the company's Gaming/Geforce segment for the first time according to the company's Q2 2021 earnings report.

Much of Nvidia's recent datacenter growth is due to the strong sales of the company's new Ampere A100 datacenter accelerators, which utilise leading-edge 7nm lithography and offer customers a significant performance and efficiency advantage over the company's earlier offerings. Mellanox, a company which was recently acquired by Nvidia, has also seen boosted earnings, contributing to this increase in data center revenues.

Nvidia's Gaming revenues now sit at $1.65 billion, which is up 26% year-over-year. Nvidia expects its gaming segment to see significant growth later this year, due to the upcoming launch of the company's next-generation gaming products. 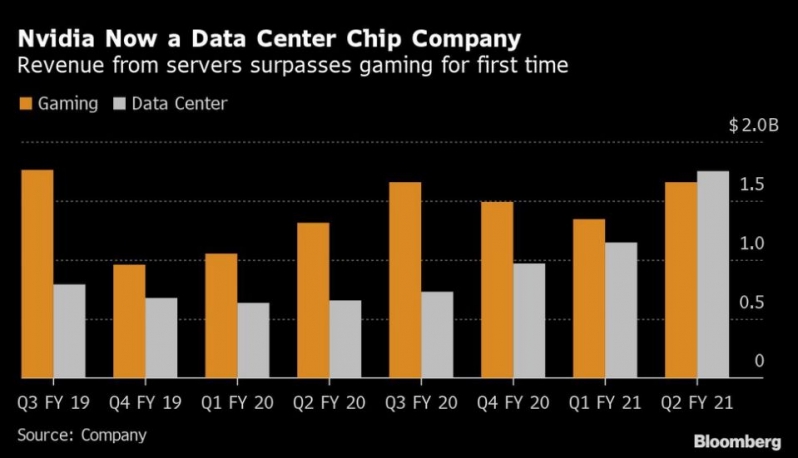 You can join the discussion on Nvidia's Datacenter Revenue surpassing the company's gaming revenue on the OC3D Forums.

Warchild
Maybe because Gamers can no longer afford their cards

Throw in the fact they can no longer hide crypto miner sales behind gamer sales and it wasn't that hard to see it I guess.Quote

KingNosser
At the rate they are going they won't be a gaming company.

But hey they love spouting numbers to make the share holders and investers happy that is what they really care about they care as much about datacenters as they do gamers i.e you are the money trees we have come to harvest.Quote

looz
Pretty sure their gaming business isn't doing too bad either, but data center side has thrived. Especially when their line-up hasn't been refreshed in a while.


But they're going to be a huge player comparable to Intel in the future, if their ARM bet pays off.Quote

Warchild
Quote:
They havent been a gaming company for a long time. Their deep learning devices, and other AI tech is very impressive.Quote

tgrech
Yeah any big company has to diversify their income sources and business if they want to stick around long term, the big three all struggled with pulling that off in the boom of smartphones(As well as Microsoft ofc) but seem to have done much better with the AI funding boom(Same with MS too I guess).Quote
Reply