Take this with a HUGE grain of salt

With Nvidia's GTC Keynote coming on May 14th, now is the perfect time to start rumour-mongering about Nvidia's next generation of graphics hardware. Many are expecting Nvidia to reveal its rumoured Ampere series of gaming graphics cards next month, even though Nvidia GTC Keynote announcement doesn't even mention gaming.

The conversation has gotten silly, with many sites sharing the image below from China Times which allegedly reveal the specifications of Nvidia's RTX 30 series of Ampere graphics cards. Many of these sites have failed to cite their source, China Times, and instead link to a (now deleted) Tweet from @chiakokhua, a retired engineer on Twitter. Note that this Tweet was deleted because @chiakokhua now believes that the specifications from China Times are false.

An important thing to note about China Times' article is that it isn't about the specifications of Nvidia's RTX 30 series of graphics cards. They just use an image which details rumoured specifications. The article itself is about Nvidia's Add-in board partners, such as ASUS, Gigabyte, and MSI have started to reduce their shipments of RTX 20 series graphics cards to prepare for the release of next-generation graphics hardware in the second half of 2020.

China Times expects Nvidia to release RTX 30 series graphics cards in late Q3 of 2020, with further hardware releases in Q4 2020 and Q1 2021. Another thing to add is that the specifications listed by China times are all presented with the mathematical symbol for less than (<), which confirms that these numbers are nothing but guesswork.

Another thing that China Times reports is that Nvidia will build its RTX 3080 Ti using a GPU core called GA100, even though most of Nvidia's x080 Ti series graphics cards use Gx102 series core designs. For example, Nvidia's GP100 (Pascal) and GV100 (Volta) chip designs were never used to create gaming graphics cards. GA100 is likely to form the basis of a future Tesla and Quadro series graphics cards, not an RTX 3080 Ti.

The specifications listed below tell us nothing. Nvidia's Ampere gaming flagship is listed with GDDR6 memory, 7nm lithography and less than 8192 CUDA cores. That's not exactly revolutionary information, and the lack of specific details here is more than enough to make these specifications seem dubious at best. 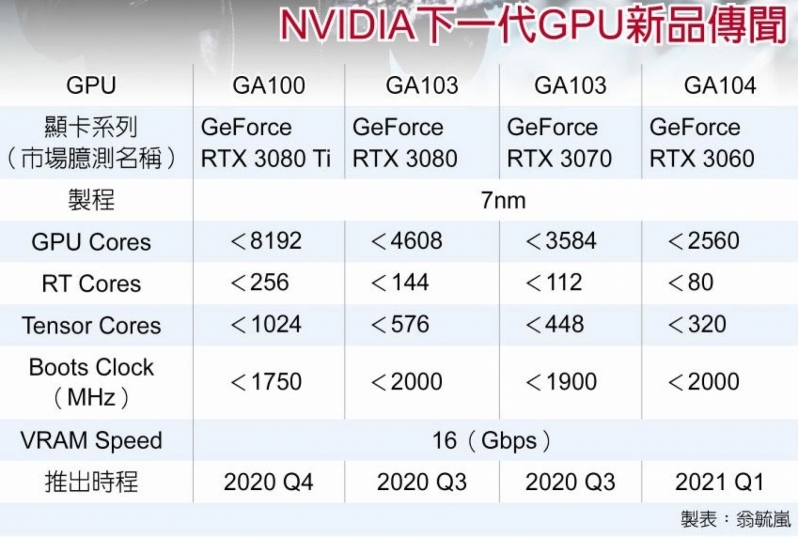 These rumours sit so far from the believable end of the leaks meter that they are almost certainly a downright fabrication. We believe the parts of the China Times report which state that Nvidia's AIB partners are preparing for the release of next-generation graphics cards, but the specifications they list for the RTX 30 series are complete nonsense.

You can join the discussion on Nvidia's rumoured RTX 30 series launch times and specifications on the OC3D Forums.

AlienALX
Well I have no idea if any of that will translate into what we see. However, the release schedule looks exactly as I predict.

grassman
Low end will have more RT cores than a 2080ti

Memory speeds are very underwhelming 2gbps more on the high end, This is where AMD can potentially hurt them if there GPU side of things were competent enough.Quote

Let's see if people will persist with the daft ideology of "TAKE MY MONEY" this winter eh?

Nvidia will usurp the 2080Ti, then later they will go for the second slam. And the fanboys will bend over and ask for more.Quote

grassman
Quote:
How can you blame them when the competition was run to the ground by this guy,

His current initiative at dell is cloud computing, Which isn't a bad idea but just look at the front page it screams amateur hour it looks like those weird scam sites, No real information about anything like is it for small business? Large deployment wtf is it?

Dicehunter
Not touching Nvidia with a barge pole, Their prices continue going up and up and up because of pure greed.Quote
Reply