That's cheap for a workstation card

Nvidia has just launched its RTX A2000 graphics card, a low-cost, low-profile workstation card that's designed to make Nvidia's RTX technologies more accessible. With pricing that starts at $450, Nvidia's RTX A2000 offers workstation users excellent value, assuming that users can make do with the card's modest specifications when compared to Nvidia's other Ampere A-series offerings.

With a low TDP of 70 watts and 6GB of VRAM, Nvidia's A2000 is a modest offering for workstation users. That said, not all workstations need massive 48GB frame buffers like Nvidia's RTX A6000 or insane levels of GPU throughput. This graphics card will be an excellent choice for upgrading older workstations, allowing users to take advantage of Nvidia's RTX workstation feature set while offering users higher performance levels than their ageing Quadro GPUs.

Nvidia's RTX A2000 is designed to be an entry point into the world of RTX, allowing their technologies to enter into low-power/low-profile workstations. This covers a major weakness of the company's existing RTX A-series lineup, giving Nvidia top-to-bottom coverage of the workstation market.

What follows is Nvidia's Press Release. Below are the specifications of Nvidia's RTX A2000 graphics card. 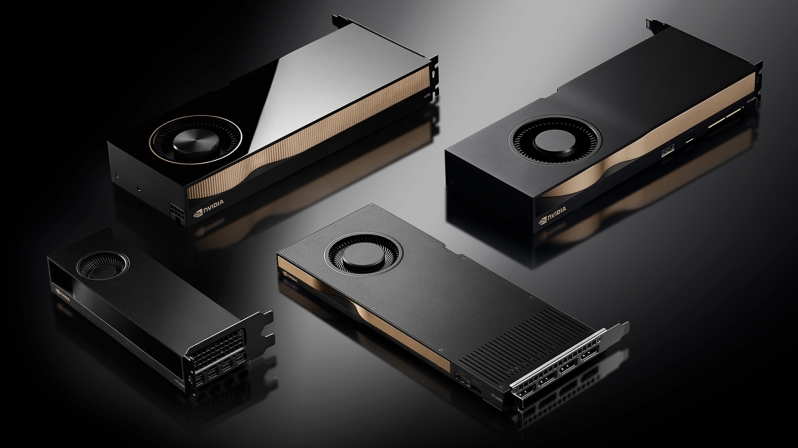 With its powerful real-time raytracing and AI acceleration capabilities, NVIDIA RTX technology has transformed design and visualization workflows for the most complex tasks, like designing airplanes and automobiles, visual effects in movies and large-scale architectural design. The new NVIDIA RTX A2000—our most compact, power-efficient GPU for a wide range of standard and small-form-factor workstations—makes it easier to access RTX from anywhere.

The RTX A2000 is designed for everyday workflows, so professionals can develop photorealistic renderings, build physically accurate simulations and use AI-accelerated tools. With it, artists can create beautiful 3D worlds, architects can design and virtually explore the next generation of smart buildings and homes, and engineers can create energy-efficient and autonomous vehicles that will drive us into the future. The GPU has 6 GB of memory capacity with error correction code (ECC) to maintain data integrity for uncompromised computing accuracy and reliability, which especially benefits the healthcare and financial services fields.

With remote work part of the new normal, simultaneous collaboration with colleagues on projects across the globe is critical. NVIDIA RTX technology powers Omniverse, our collaboration and simulation platform that enables teams to iterate together on a single 3D design in real time while working across different software applications. The A2000 will serve as a portal into this world for millions of designers.

Among the first to tap into the RTX A2000 are Avid, Cuhaci & Peterson and Gilbane Building Company.

"The A2000 from NVIDIA has made our modeling flow faster and more efficient. No longer are we sitting and wasting valuable time for graphics to render, and panning around complex geometry has become smoother," said Connor Reddington, mechanical engineer and certified SOLIDWORKS professional at Avid Product Development, a Lubrizol Company.

"Introducing RT Cores into the NVIDIA RTX A2000 has resulted in impressive rendering speedups for photorealistic visualization compared to the previous generation GPUs," said Steven Blevins, director of Digital Practice at Cuhaci & Peterson.

"The small form factor and low power usage of the NVIDIA RTX A2000 is extraordinary and ensures fitment in just about any existing workstation chassis," said Ken Grothman, virtual design and construction manager at Gilbane Building Company.

The NVIDIA RTX A2000 is the most powerful low-profile, dual-slot GPU for professionals. It combines the latest-generation RT Cores, Tensor Cores and CUDA cores with 6 GB of ECC graphics memory in a compact form factor to fit a wide range of systems.

The NVIDIA RTX A2000 features the latest technologies in the NVIDIA Ampere architecture:

- Second-Generation RT Cores: Real-time raytracing for all professional workflows. Up to 5x the rendering performance from the previous generation with RTX on.

- CUDA Cores: Up to 2x the FP32 throughput of the previous generation for significant increases in graphics and compute workloads.

- Up to 6 GB of GPU Memory: Supports ECC memory, the first time that NVIDIA has enabled ECC memory in its 2000 series GPUs, for error-free computing.

- PCIe Gen 4: Double the throughput with more than 40 percent bandwidth improvement from the previous generation for accelerating data paths in and out of the GPU.

The NVIDIA RTX A2000 desktop GPU will be available in workstations from manufacturers including ASUS, BOXX Technologies, Dell Technologies, HP and Lenovo as well as NVIDIA's global distribution partners starting in October.

You can join the discussion on Nvidia's RTX A2000 workstation graphics cards on the OC3D Forums.