Earlier today, Nvidia delayed the launch of its RTX 3070 graphics card, hoping that this delay will allow more gamers to access Nvidia's newest and most value-oriented Ampere graphics card.

Nvidia has also confirmed that its RTX 3070 will deliver performance levels which are similar to their RTX 2080 Ti, offering "similar or faster performance" across a range of DirectX and Vulkan titles, both ray-traced and rasterised.

You can read Nvidia's statement regarding the RTX 3070's delayed launch below.

Production of GeForce RTX 3070 graphics cards are ramping quickly. We’ve heard from many of you that there should be more cards available on launch day. To help make that happen, we are updating the availability date to Thursday, October 29th.

We know this may be disappointing to those eager to purchase a GeForce RTX 3070 as soon as possible, however this shift will help our global partners get more graphics cards into the hands of gamers on launch day. 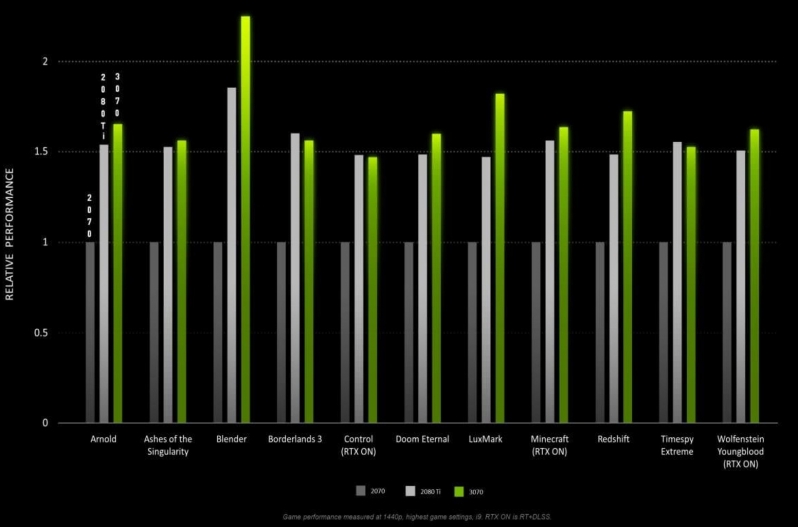 Nvidia's RTX 3070 promises to deliver incredible value to PC gamers, offering insane levels of value for money when compared to the company's older RTX 20 series lineup. The question now is how Radeon will respond, as its RX 6000 series is due to be revealed on October 28th, one day before the RTX 3070's launch.

You can join the discussion on Nvidia releasing first-party benchmarks for its RTX 3070 graphics card on the OC3D Forums.

The_Crapman
Oh yeh. Delayed "because we want there to be more of them at launch". Pffft! If you believe that then let me tell you about these magic beans I have for sale that double the fps of any system....

Nice little delay to one day after the rdna2 "event" in the hope of catching a glimpse of the price and performance and adjusting theirs to match. Still not entirely sure exactly what will happen on the 28th at the AMD event. Do we have it as a confirmed release date for cards and/or reviews? I thought it'd just be a tech show like Jensen's kitchen, but with less leather and spatulas.Quote

Dark NighT
Quote:
Lmao yep i can see a Jen in there!Quote

TheF34RChannel
Had to watch this! Brilliant satire!!

Of course they delayed it because of AMD - or to get more cards in the hands of bots...? It doesn't really matter to me that they aren't honest and open about it; they're a company. My dishwasher soap company lies all the time with how I need less; only a tiny drop so this bottle should last me at least 80 years!Quote
Reply