That's a big performance drop when compared to their RTX 4090...

Nvidia gives gamers another look at the RTX 4080's performance

Nvidia's RTX 4080 will be releasing in two flavours, each of which offers different allotments of CUDA cores and different amounts of GDDR6X memory. Both graphics cards offer gamers completely different performance profiles, forcing us to wonder why Nvidia did not call the 16GB model the RTX 4080 Ti, or their 12GB model the RTX 4070. Nvidia's RTX 4080 16GB and RTX 4080 12GB will be launching in November with MSRP prices of $1,199 and $899 respectively.

In A Plague Tale: Requiem, the vast majority of Nvidia's RTX 30/40 series lineup relies on DLSS to achieve 60+ FPS framerates. Note that this is without ray tracing enabled, which means that this game has the potential to be a lot more demanding. A Plague Tale: Requiem will support DLSS 3 at launch, giving Nvidia's RTX 40 series graphics cards a huge advantage over their RTX 30 series counterparts. Without DLSS Frame Generation, Nvidia's 12GB RTX 4080 would not be able to outperform Nvidia's last-generation RTX 3090 Ti. 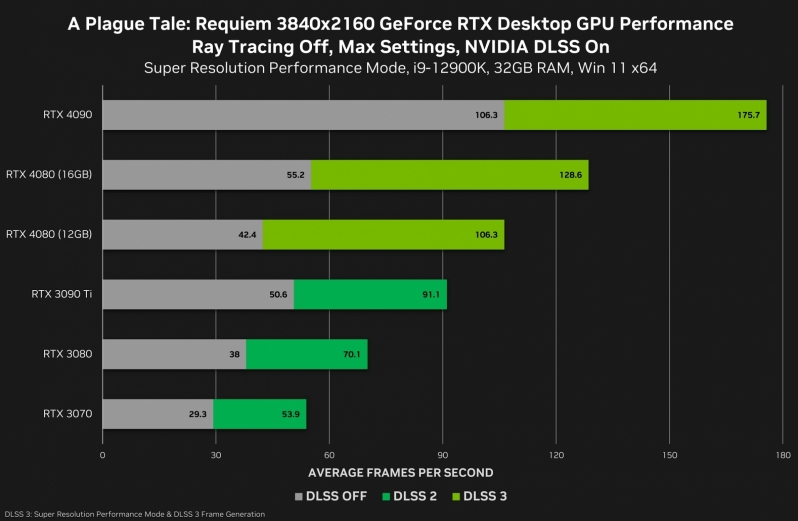 Once again we see a hige performance gap between Nvidia's RTX 4090 and TX 4080 16GB, suggesting that there is space for an RTX 4080 Ti model if AMD decides to exploit this gap in Nvidia's RTX 40 series lineup. 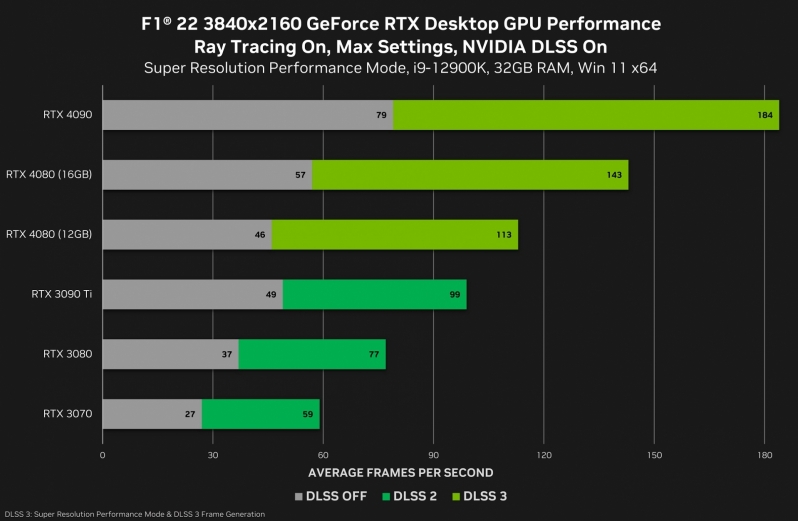 With Microsoft Flight Simulator, we once again see that DLSS 3 has a huge impact on the performance profile of their RTX 40 series GPUs. We also see that Nvidia's RTX 3090 Ti can also outperform their RTX 4080 when DLSS is disabled, even if only marginally. 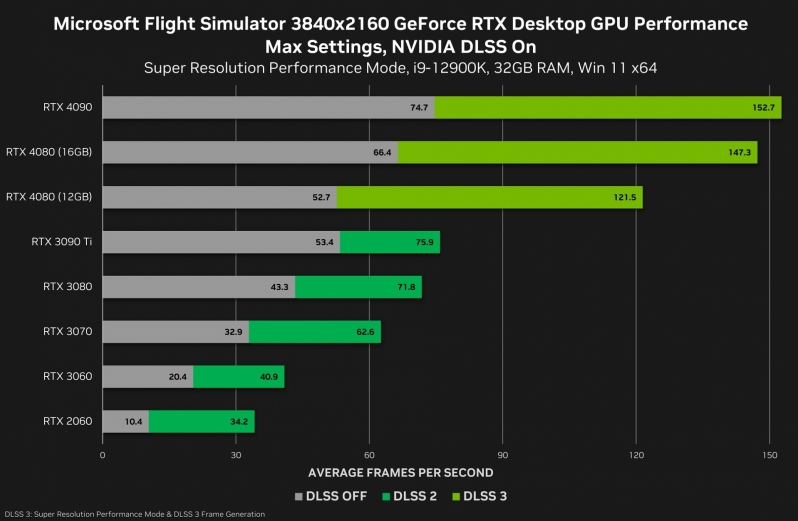 In the games above, Nvidia has given gamers a good look at what their RTX 4080 graphics cards will perform in some modern games, both with and without DLSS. DLSS 3 is a big addition for Nvidia's RTX 40 series, and you can bet that Nvidia will be working hard to get their technology integrated into as many games as possible, especially now that DLSS has competitors in the form of XeSS and FSR 2.0.

You can join the discussion on Nvidia's RTX 4080 performance data on the OC3D Forums.

Bagpuss
Wow, if these benchmarks are indicative..that 12GB 4070 is a real dog of a card, for the money they're asking.

..and the price increase/performance increase ratio on the 4080 is pretty appalling as well.


If you just have to have the new shiny stuff, you'd be much better off, in price/performance increase ratio terms to just bite the bullet, bend over and get a 4090, or wait for the 4080Ti next year or the 5080 in 2024.Quote

Nogginthenog
The 12gig card seems about 10% faster than the 3080 in raster performance.

And this will be the best case scenario for marketing.

It's 50% more expensive than that card.

The only one that makes any sense is the 4090 in terms of value, which is ridiculous.

They cannot offer performance to justify that, because to do that they would have to be too close to the 4080.

AngryGoldfish
Quote:
The 4090 is only considered 'better value' because Nvidia artificially made it that way. They made the 3080 look good because it replaced the 2080. The 4090 looks good because it's replacing the 3090. But these were average or atrocious to begin with. I'm not saying this because you don't know, so I hope I don't come across as patronising. I just want to express how I see it. The 4090 is an absurd card. Its value proposition is only because of where it sits in the stack.


And I don't think AMD are going to take the opportunity they have ahead of them. I've lost much of my faith in them grabbing hold of their potential 'Maxwell' moment. Because ADA is so grossly overpriced, it makes me think that Jensen knows AMD won't try to undercut them by anything more than a few pennies. He's already announced the 4080's. He only has the 4080Ti and the 4070 and below to compete with AMD if they decide to come out with their Maxwell moment. Either Jensen is incredibly arrogant and foolish, or he knows exactly what he's doing and knows that AMD are gonna follow suit and sell fewer units for higher prices and make similar amounts of money. AMD know they are behind in software and hardware. And they are behind in mindshare. They are even behind in lithography. AMD could continue to accept the crumbs of those who don't buy an Nvidia card.

If AMD do decide to aggressively undercut Nvidia, I'd be over the moon. I'd love to see Jensen forced to start introducing 'Super' models sooner, or even drop the prices of current 4000 models and claim that it was just because the 3000 series was so good and in such high demand that the ADA cards had to priced where they were to sit alongside the 'great Ampere.' I wouldn't be surprised if that's the spiel he'll spit.

"Ampere was so ahead of its time that it deserved to run for four years instead of the normal two, alongside our latest and greatest, ADA Lovelace."Quote

AlienALX
Quote:
It's a deliberate act to push up the last of the 30 series prices.

Fact is AMD are nowhere to be seen, so Nvidia get a "Full on urine extraction". IDK how much research you have been putting in, but Jen said he was going to manipulate the prices so that 30 series stock could sell out. And that is exactly what has happened. If you did not buy at the peak time (like my friend and I did?) then the prices have gone back up.

Only JSH could fall in a bucket of crap and come out smelling of roses. Only he can do the things he does and get people going mad. The only person I have ever known with that power was Steve Jobs. And he is gone. TBH? I think many pined over his death so much they turned to Jen.Quote
Reply