Nvidia has a new 50 series graphics card, and we wish it was more affordable.

At CES 2022, Nvidia has launched a new budget-oriented 50-class graphics card, a successor to their GTX 1050, 1050 Ti and 1650 series graphics card that delivers RTX features, a larger frame buffer, and a significant performance boost.

With pricing starting at $249, Nvidia's RTX 3050 promises to deliver great performance levels on a budget. That said, it remains to be seen how many graphics cards will be sold for Nvidia's $249 MSRP price.

With the RTX 3050, Nvidia's RTX feature set enters their 50-class GPU lineup. This means that Nvidia's RTX 3050 will feature support for hardware accelerated ray tracing, DLSS and all of Microsoft's DirectX 12 Ultimate features. With DLSS, RTX 3050 users can boost the performance of their Nvidia's latest budget graphics card, adding to the graphics card's already huge boost in performance over its predecessors. 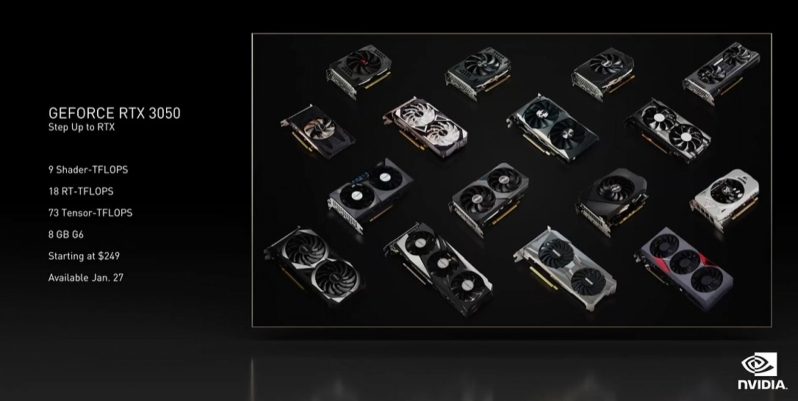 Sadly, Nvidia has revealed little in the way of product specifications during its CES livestream, though we have confirmed that Nvidia's RTX 3050 will feature an 8GB frame buffer. This is more than enough VRAM for modern games at 1080p, and an area that gives Nvidia's RTX 3050 a huge advantage over AMD's newly announced RX 6500 XT.

With their RTX 3050, Nvidia's bringing new features and more features to its 50-class of products. Now, Nvidia's RTX feature set is an expected part of the company's Geforce product line.

Nvidia's launching its RTX 3050 series of graphics cards on January 27th, arriving with a minimum price of $249. We hope to show you this graphics card's full specifications soon.

You can join the discussion on Nvidia's RTX 3050 desktop graphics card on the OC3D Forums.

Dicehunter
They missed a good chance at making a meme card

haha that's really funny. Probably what the 4000 cards will look like