PC gaming has entered a crossroads. Next-generation consoles are here, changing the demands of new AAA games and heralds the adoption of a new hardware feature set. Ray tracing is now embedded within today's consoles, which means that it is only a matter of time before games will require graphics cards that support hardware-accelerated ray tracing.

With their RTX 3060, Nvidia has created a graphics card that they believe is ready for the future. For $329 they are offering gamers 12GB of GDDR6 VRAM, support for hardware-accelerated ray tracing, support for Nvidia's DLSS technology and more performance than their RTX 2060 graphics card in both rasterised and ray-traced workloads. 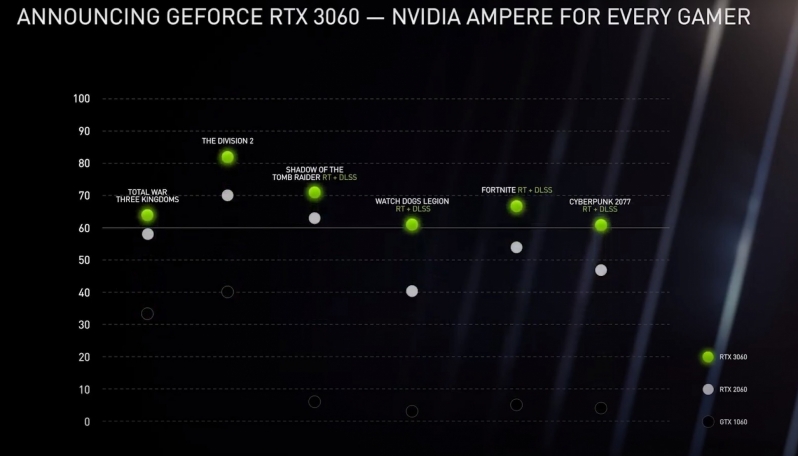 With full support for the DirectX 12 Ultimate feature set and its generous allotment of GDDR6 memory, Nvidia's RTX 3060 graphics card could become one of the best baseline graphics cards for next-generation PC gaming. This will be especially true if Nvidia continues to be aggressive with developers when promoting DLSS adoption.

If their RTX 3060 performs as Nvidia claims, it will be a great graphics card for its sub-$350 price point, especially when compared to graphics cards like Nvidia's RTX 2060. It could be argued that 6GB of VRAM isn't enough for next-generation gaming, a factor which has made Nvidia's use of a large 12GB frame buffer music to the ears of many gamers.

Nvidia plans to launch their RTX 3060 graphics cards in late February. Hopefully, Nvidia has been able to manufacture enough GPUs to meet demand, as all of Nvidia's other RTX 30 series graphics cards remain difficult to access due to the seemingly unsatisfiable demand of today's consumers.

You can join the discussion of Nvidia's RTX 3060 graphics card on the OC3D Forums.

KingNosser
Time will tell i doubt most will be able to get one let alone at msrp.Quote

66racer
So does that put it around the 2060 Super range? Man that 12GB vram though. Will make for an excellent budget 3d visualization card. Still disappointed in the vram on the 3000 cards, this 3060 nailed it though. 8GB on the 3070 should have been higher.Quote

ImprovizoR
So $329 MSRP is now a budget option, and we should just accept that as our new reality?Quote

Dr.Puschkin
Quote:
Even though I'm not the target audience of this product I have to agree, it is overpriced (just like other RTX cards).Quote
Reply