Nvidia's next-gen flagship could be 2.2 times faster than an RTX 3090

A "Full AD102 at high power draw" was reportedly able to play Control at 4K Ultra settings with Ray Tracing and DLSS at 160+ FPS, easily surpassing what's possible with Nvidia's RTX 30 series graphics cards. Below the initial claims from @XpeaGPU on Twitter, a WCCFTECH writer (Hassan Mujtaba) posted results which showcased benchmark results where an RTX 3090 was able to achieve an average framerate of 72 FPS.

With an RTX 3090 running Control at 72 FPS and an alleged RTX 40 series flagship running at 160+ FPS, it would appear that Nvidia's RTX 40 series will deliver some insane generational performance leaps. 160 is over 2.2 times higher than 72 after all.

Let's throw this rumour under the bus

While rumours that Nvidia's RTX 40 series flagship could deliver a 2.2x performance boost over Nvidia's RTX 3090 is an exciting prospect, it is worth noting that both performance claims for the unknown "Full AD102" GPU and the RTX 3090 were not confirmed to be tested using the same areas of Control and both benchmarks use different graphics settings.

For starters, scene-to-scene performance variance in many games is huge, which is why benchmarking data should only be compared when using the same benchmarking areas with minimal variation. Beyond that, the results posted for the RTX 3090 were using High settings with RT Reflections/Shadows set to high and DLSS set to Quality. There is no way of knowing that the same settings were used for the alleged RTX 40 series flagship. For starters, the DLSS setting is not stated, and Control lacks an Ultra preset. Even if we assume that "Ultra" means maxed out settings, it looks like the RTX 3090 results that were compared did not have Ray Traced Diffused Lighting, Ray Trace Debris, or Ray Traced Transparent Reflections enabled. To make a long story short, these results are not comparable. 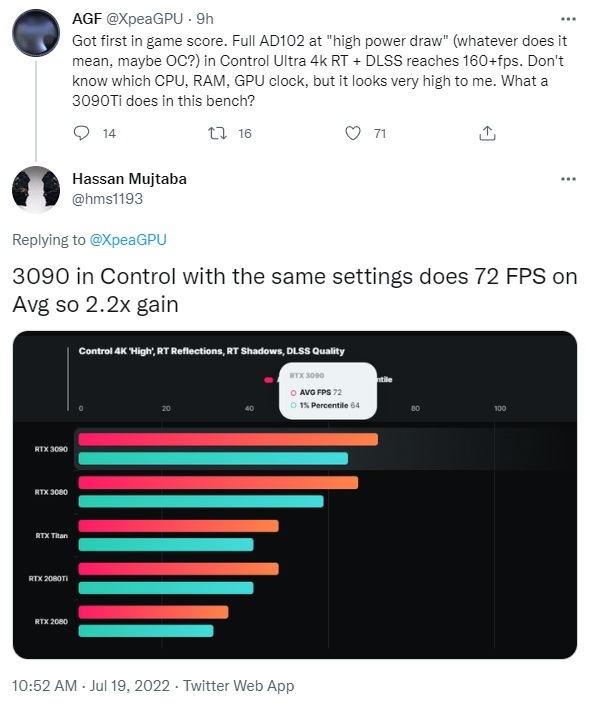 If genuine, these alleged "Full AD102" results are impressive. That said, there are too many factors that are questionable. For starters, DLSS settings were not stated, making comparisons impossible. Second, "High Power Draw" could mean anything from a crazy high TDP to a GPU overclock. If this performance data is legitimate, there is no guarantee that a GPU with this "High Power Draw" TDP will be released, though it does look like TDPs are going up with Nvidia's next-gen GPUs.

Aside from the sheer inability to compare this data with Nvidia's existing GPU lineup, it is also questionable where Nvidia's "Full AD102" performance gains could come from. Has Nvidia created more efficient RT cores (for accelerated ray tracing), stronger Tensor Cores (for faster DLSS), or a huge increase in raw rasterisation performance (for more generalised performance gains). Does this performance come from architectural changes, higher SM counts, higher clock speeds or all three? Who knows. These rumour gives us no useful data.

The main takeaway from this rumour is that it needs to be taken with a a few shakers of salt. There is nothing that makes these reports verifiable, and comparing these performance results to GPUs from other sources is pointless. Control does not have an integrated benchmark, so there is no way for a another source to get comparable data without knowing the benchmark scene used for this "full AD102" testing.

You can join the discussion on these dubious RTX 40 series "Full AD102" results on the OC3D Forums.

dazbobaby
So is it just me or is no one else interested in GPU's we can't afford to buy, and now this year... run?Quote

Dawelio
Quote:
Nah, you're definitely not alone. Seeing many staying with their 30 series or even older gen GPUs. No need to have anything higher, for many reasons, other than if you really need every last bit of the highest performance there is.