Up to 23% performance gains are possible in popular titles

Nvidia is making waves at Gamescom 2019, announcing raytracing support for Minecraft, Dying Light 2 and a multitude of other titles. But what about existing games? Don't worry, Nvidia has something just for you with their Geforce 436.02 Gamescom Game Ready Driver.

Nvidia promises the largest performance gains in Forza Horizon 4 and Apex Legends, with Battlefield V, Strange Brigade and World War Z offering smaller performance gains. One thing to note here is that most of these gains are targetted at popular benchmarking titles for reviewers. 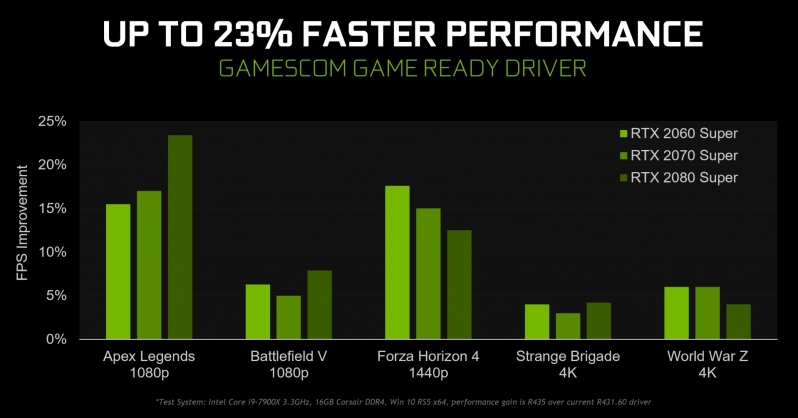 You can join the discussion on Nvidia's Gamescom Game Ready 436.02 Driver on the OC3D Forums.

but are these gains specific to Ray Tracing or the general FPS of the cards without ?Quote

grec
Most of the games here don't have raytracing support but I'd assume all the games are running at max settings so if that's available I'd guess they'd be on but the gains would still apply generally (Big gains in Horizon 4 for instance, a DirectX12 game without RT). I think Mark might cover all of this is the upcoming detailed article.Quote

NeverBackDown
Only download the driver if you want Geforce Experience installed too..Quote
Reply