Beenox has released a notice confirming that Call of Duty: Modern Warfare 2 is not stable with Nvidia's Geforce 526.47 GPU drivers and have asked that Nvidia GPU users downgrade their drivers to older more stable Geforce drivers.

Nvidia has confirmed that they are currently working on a hotfix for 526.47 drivers that will address the stability issues, but for now the company has suggested that gamers download and use the company's Geforce 516.59, or 522.25 drivers.

From our experience, Nvidia's 526.47 Geforce driver and 526.30 Studio drivers can cause areas of Call of Duty: Modern Warfare 2's visuals to turn black, make the screen turn black momentarily and crash the game to desktop. As it stands, Modern Warfare 2 can be rendered unplayable due to these issues, but Nvidia users can rest assured that Nvidia's older drivers can play the game without any issues. 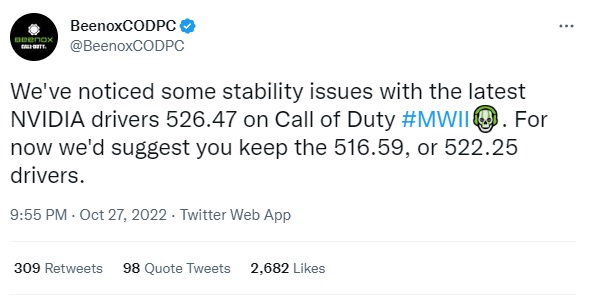 Sadly, we do not know when Nvidia's hotfix for their Geforce 526.47 drivers will be made available to download. For now, Nvidia has provided PC games advice on how to roll back their Geforce GPU drivers here.

You can join the discussion on Nvidia's Geforce 526.47 drivers having stability issues in Modern Warfare 2 on the OC3D Forums.

Dawelio
Funny that the rollback instructions only cover Windows XP, Vista and 7. Not any newer version of Windows.Quote
Reply