Nvidia has announced that they will be hosting a "Special Broadcast" on January 12th, one day after the start of CES 2021. Here, Nvidia is likely to reveal new RTX 30 series products, with the most likely contender being their RTX 30 series of mobile graphics cards.

At CES, most notebook makers enjoy showcasing their upcoming designs, making the event the perfect launch platform for the RTX 30 series of mobile GPUs. That said, it is also probable that Nvidia will also reveal their RTX 3060 graphics card, as its design should be well suited to the mobile GPU market.

Nvidia's Special Broadcast will be hosted at 9 AM PST on January 12th, which translated to 5 PM GMT. AMD's CES 2021 keynote is at 11 am ET/4 PM GMT on January 12th, one hour before Nvidia's broadcast. AMD's Keynote is scheduled to last one hour, ensuring that both events will not clash.

At CES, AMD is expected to reveal their Ryzen 5000 series of mobile processors, CPUs which should pair well with Nvidia's RTX 30 series mobile GPUs. This should give Nvidia more freedom to showcase more RTX 30 series gaming laptops, as a lot of laptop makers are expected to utilise Ryzen following the success of the Ryzen 4000 series.

Nvidia's CES broadcast will be hosted by Nvidia's Jeff Fisher, which means that the event may lack the presence of CEO Jensen Huang and his iconic collection of leather jackets. 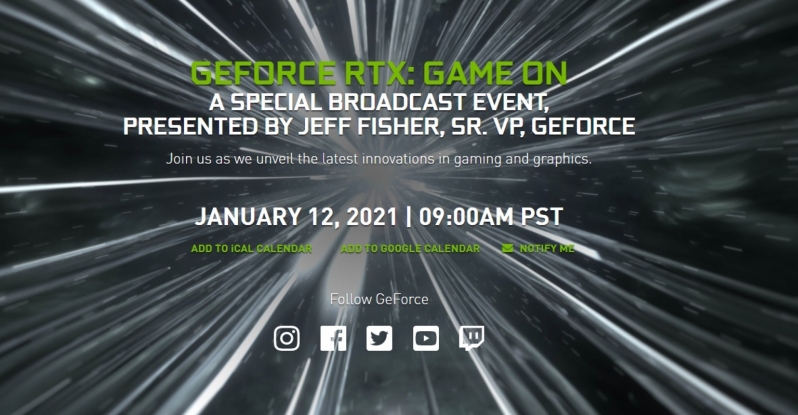 You can join the discussion on Nvidia's Geforce RTX "Special Broadcast" on the OC3D Forums.