Is Nvidia going VRAM heavy with their RTX 40 series?

Rumour has it that Nvidia has given their AIB partners access to two sets of reference designs for their RTX 4080 graphics card, with one featuring 12GB of GDDR6X memory while the other offers 16GB of memory. These two alleged RTX 4080 models have two distinct PCB designs, with the 12GB model having a 10-layer PCB while the 16GB model has a 12-layer PCB.

While it may seen strange for Nvidia to be sharing multiple graphics card designs to their partners, this is not a new practice for Nvidia. Remember that Nvidia's RTX 3080 eventually had 10GB and 12GB models, and that a 20GB model was part of Nvidia's roadmap at some point. Beyond that, we have seen rumours of RTX 4080 models with huge memory specification variations.

MEGAsizedGPU, the leaker behind today's RTX 4080 claims, has also stated that Nvidia are also working on a 24GB RTX 4090 graphics card that will utilise a 14-layer PCB design. Right now we do not know when Nvidia plans to release their RTX 40 series of graphics cards, or of the specifications of any of their RTX 40 series models have been finalised. 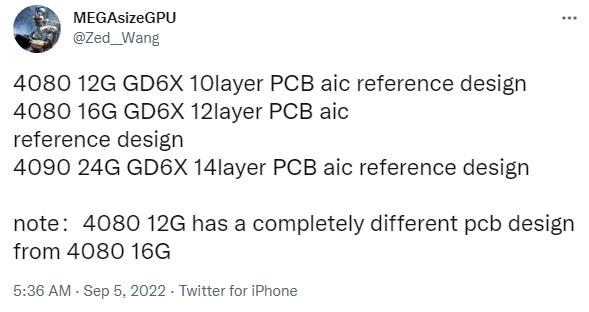 Launching 12GB and 16GB versions of their RTX 4080 could be a smart move from Nvidia, lowering the MSRP and manufacturing costs of their 12GB models while offering consumers 16GB models for gamers who desire a larger frame buffer for high resolution gaming with mods and other add-ons.

Currently, Nvidia's RTX 4080 graphics card is expected to have around 10,000 CUDA cores and a power draw of around 340 watts. Right now, it seems likely that Nvidia will launch their RTX 4080 with an affordable 12GB model and launch an enhanced 16GB model at a later date for a higher price.

You can join the discussion on Nvidia's rumoured 12GB and 16GB RTX 4080 graphics cards on the OC3D Forums.

AngryGoldfish
Quote:
I actually kinda like the idea. Segmentation has its negatives for sure, but speaking for myself, if I were buying a 4080 for 1440p/165Hz gaming (I'm not but a man can dream) and I had a choice between a hypothetical 850 16GB version and a 750 version with 12GB, I'd buy the cheaper one. In spite of Alien's best efforts to convince me

12GB is enough for 1440p gaming. Of course, why would anyone buy a 4080 for 1440p gaming? Because they prefer gaming at 165 FPS with one tiny setting turned down and saving 100 than playing with 90 FPS at 4k with all the settings at their max (when visually it's borderline impossible to tell the difference) and pay an extra 100 for it. Segmentation is just choice. Again it has its drawbacks, but it is still just choice.Quote

meuvoy
Quote:
I think we're missing the point here, given the leaked performamve gap I can see 4060s being powerful enough for 4k gaming... If rhe 4080 comes with 12 or 16GB of VRAM then thr 4070 surelly will have 10-12GB and the 4060 probably 8GB? This is shameful... But kinda expected to be fair... NVIDIA always just gave gamera the exact amount of VRAM they needed and apparetly this will not change.Quote

Avet
4k gaming is just a marketing stunt and it is sooo overrated. Consoles don't do 4k. They never have. What is the point of 4k 70fps gaming? 1440p 120+fps is the sweetspot for a long time, and for a reason. 1080p is still the dominant resolution and we are so far away from 4k ever being mainstream. No reason to give it any thought.

12GB and 16GB models are good IMO because if you need a card only for gaming 12GB is more than neough. 100 coins less is a lot of beer, or a CPU tier higher which can make a difference with a 4080. But if you need a GPU for editing and stuff 16GB is so nice to have.Quote

Innovation is needed to move forward and eventually bring costs down for that technology which will allow it to potentially be adopted for mainstream use. I agree on the sweetspot though. I have a 200hz monitor, but I never set it to 200 as 120hz with 10bit or 12bit HDR is much more pleasant.Quote
Reply