Nvidia's Lovelace flagship could be a power-hungry beast

Reports a circulating that Nvidia's testing an uber-powerful Lovelace series graphics card that has a TBP of 900W, a power draw that is double that of an RTX 3090 Ti GPU.

Nvidia's alleged 900W monster is a test board from Nvidia, which means that Nvidia may never release this gaming behemoth into the wild. This GPU reportedly used two 16-pin PCIe 5.0 power connectors, a full-fat version of Nvidia's Ada Lovelace AD102 graphics core, and supports 48GB of GDDR6X memory.

At this time, it is unknown whether or not Nvidia plans to release any graphics cards with dual 16-pin power requirements with its RTX 40 series, with many rumours alleging that Nvidia's RTX 4090 will have a 600W TDP. Even at 600 watts, Nvidia's RTX 40 series flagship is significantly more power hungry than Nvidia's existing RTX 30 series SKUs, with their RTX 3090 and RTX 3090 Ti having reference TDPs of 350W and 450W respectively.

Currently, it is unclear if Nvidia's 900W gaming behemoth will ever be a legitimate product, be it a test design for high-end RTX 40 series overclocking SKUs, a Lovelace-based Titan series graphics card, or a new ultra-premium Geforce offering. All we know is that Nvidia's going to crazy lengths to push the performance levels of its RTX 40 series products as high as possible. 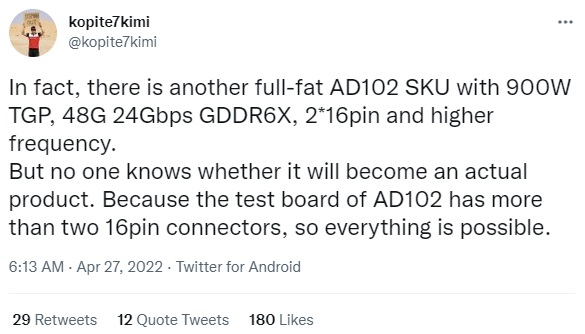 Nvidia's full-fat AD102 graphics cards reportedly features 48GB of GDDR6X memory running at 24Gbps, which is a crazy amount of memory, even when compared to Nvidia's already crazy RTX 3090 and RTX 3090 Ti.

Both AMD and Nvidia are due to reveal new GPUs in the second half of this year, with product reveals from both companies being expected around September or October.

You can join the discussion on Nvidia's alleged 900W monstrosity on the OC3D Forums.

AngryGoldfish
I'd love if RDNA3 was so good that it forced Nvidia to do this.Quote
Reply