GPU prices are starting to get resonable

For the past two years the GPU market has been nuts. Pricing was through the roof and between crypto miners and scalpers, there was little "value for money" to be gotten from the GPU market. It sucked, it hurt the industry and things are only now starting to return to normal.

These days, the MSRP prices that are listed by manufacturers are, for the most part, wishful thinking. They are the "Minimum" price, and there are many reasons for graphics cards to be more expensive than that. Be it larger coolers, higher clock speeds, or better power circuitry, there are reasons why many GPU models do not sell for "MSRP" prices. This is especially true if these MSRPs give retailers and manufacturers razer thin margins.

It ain't MSRP, but its good value

Yes, Nvidia's MSRP for their RTX 3050 8GB may be £249, but the RTX 3050 has never really sold for that price. In our eyes, the RTX 3050's pricing has dramatically lowered over the past few weeks, and given its performance and feature set, it represents great value in today's market. With more VRAM, DLSS support and all-round better performance, the RTX 3050 can smash AMD's RX 6500 XT.

One of the RTX 3050 models that are available for £269.99 today is the Gigabyte Eagle model (Review Link), which we reviewed when the RTX 3050 first launched.

Currently, Overclockers UK has two RTX 3050 models that are available for £269.99. The Gigabyte Eagle model and the Zotac Twin Edge model. 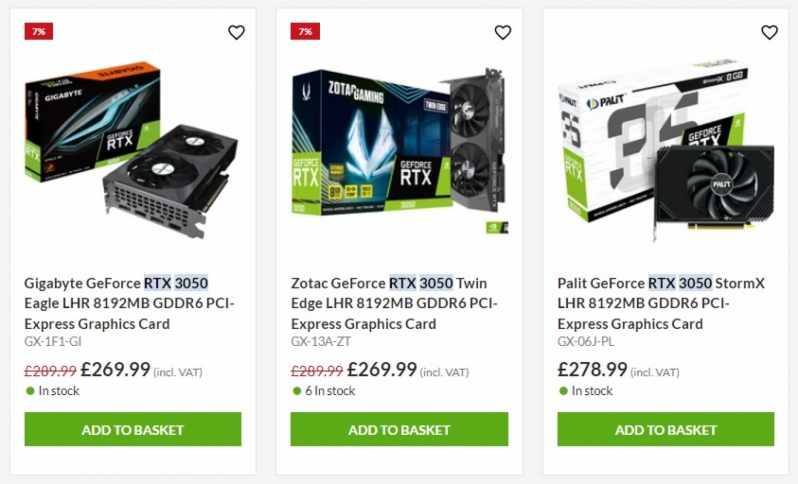 Buy now, or wait for next-gen?

I know what many of you are thinking. Nvidia'[s RTX 40 series and AMD's Radeon RX 7000 series are due to launch later this year. Isn't it better just to wait for next-gen?

For starters, GPU launches typically start with the release of new high-end product. It will be a long time before we will see an RTX 4050 or a Radeon RX 7500 XT. Beyond that, we don't know whether or not these new graphics cards will face shortages or not. We can't predict the future.

Right now, Nvidia's RTX 3050 graphics cards are now available at prices that are far lower than what they normally are. It wasn't long ago that £330 was a good deal for a new RTX 3050, and that is £60 more than what you can buy the same graphics card for today. That's effectively a discount of over 20%. Would we like to see lower pricing? Yes. Will we see lower pricing? Who knows?

As it stands, RTX 3050 graphics cards are available for much lower prices than before. That's great news for gamers. Let's hope that the GPU market will continue to normalise, and that next-generation GPU launches will not be hampered by similar hardware shortages.

You can join the discussion on Nvidia's RTX 3050 graphics cards being available for £269.99 in the UK on the OC3D Forums.