How long until Nvidia starts giving away games with their GPUs again?

Nvidia's graphics cards are now in stock, giving Nvidia's marketing teams some work to do

It wasn't long ago that graphics cards were considered unobtanium, either being out of stock at retailers or horrendously overpriced. Today, the GPU market is starting to normalise, and that means that GPUs are now available and in-stock at retailers. Gone are the days that GPUs flew of store shelves as soon as they were made available. Now, GPU manufacturers need to work to sell their products.

It has been a while since we have seen a major marketing campaign from a major GPU manufacturer (sorry Intel), and Nvidia's "Restocked and Reloaded" campaign has highlighted that Nvidia and their competitors now need to work to sell their products. Before too long, we expect AMD and Nvidia to start running more lucrative promotions, the kind where they will give away games and other freebees with their GPUs.

Below is what Nvidia says on their website regarding their "Restocked and Reloaded campaign. 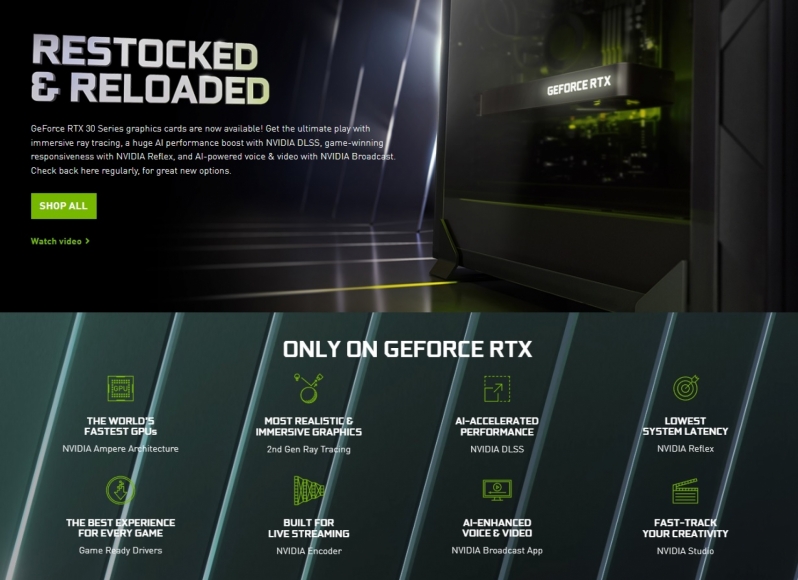 Nvidia's graphics cards are now readily available at retailers, and GPU pricing is starting to normalise. The GPU shortage is over, let's hope that history does not repeat itself with Nvidia's RTX 40 series.

You can join the discussion on Nvidia's Restocked and Reloaded campaign on the OC3D Forums.

KingNosser
Restocked and sitting at over inflated prices ?Quote

Piskeante
DO NOT BUY ANY GPU, if you can afford NOT TO DO IT

In just a few months, thousands, probably millions of GPU will be in the second market at half real MSRP, because miners will be selling them.

Just wait. It's the most intelligent thing you can do right now. Moreover, all gpus are highly overpriced. This situation is coming to an enormous end in just a few months.