Nvidia teases "Project Beyond" - Is the Geforce RTX 40 series coming?

Nvidia's Geforce social media handles have started to tease something called #ProjectBeyond, suggesting that the company plans to make a new product reveal sometime in the near future.

Only Nvidia's Geforce social media accounts are posting about #ProjectBeyond, confirming that Nvidia's upcoming announcement is gaming related. It is probable that Nvidia plans to reveal their next generation of gaming products soon, something that Nvidia's Jensen Huang has recently confirmed during one of the company's earning calls. We expect Nvidia to discuss their next-generation products at GTC later this month, and this Geforce teaser makes it seem likely that Nvidia will be discussing their RTX 40 series of products there. 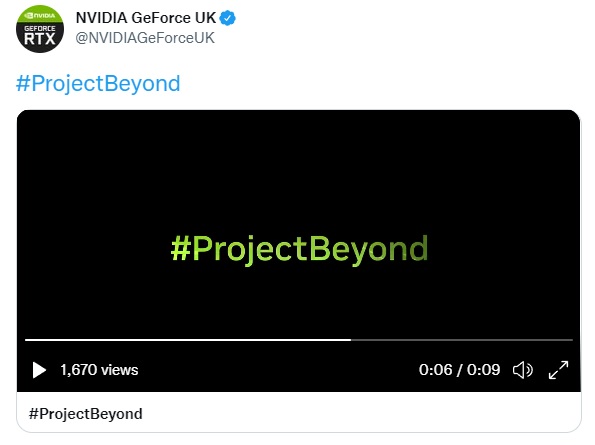 While the reveal of next-generation graphics cards is expected in the near future, it is possible that Nvidia's #ProjectBeyond is a new GPU technology and not a new generation of graphics cards. It is possible that Nvidia has new gaming-focused AI technologies in the works, a newer version of DLSS, or something else in the works that could be marketed under the #ProjectBeyond banner.

Let's hope that we hear more from Nvidia very soon.

You can join the discussion on Nvidia's #ProjectBeyond on the OC3D Forums.