When Nvidia announced their support for Adaptive Sync displays, the company did not state what graphics cards would support the standard. Would every graphics card that supports G-Sync work with G-Sync compatible displays? Will Adaptive-Sync monitors only work on select Nvidia graphics architectures?

On the Nvidia Forums, a member of the company's Customer Care team confirmed that G-Sync Compatible displays would only work on Pascal or newer graphics architectures, limiting support for the feature to Turing, Volta and Pascal graphics cards. In a short post, Nvidia confirmed that the company "do not have plans to add support for Maxwell and below."

This means that 900-series or older Nvidia graphics cards will not support Adaptive-Sync/G-Sync Compatible displays, a factor that will undoubtedly come as sad news for users of capable 900 series GPUs like the GTX 980 Ti. 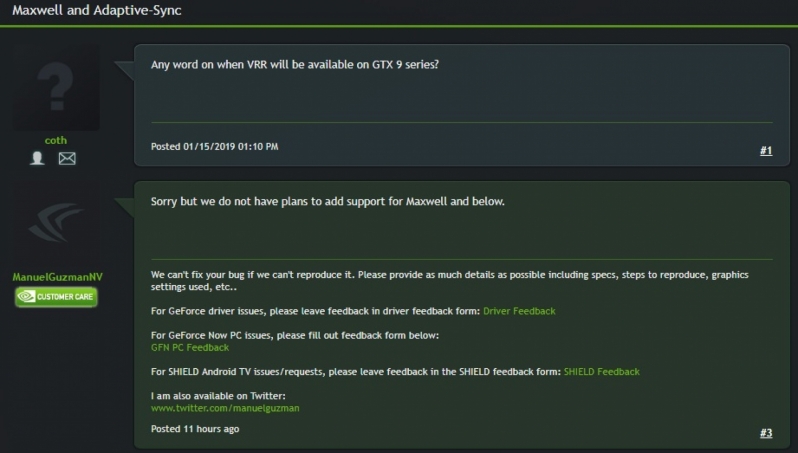 While it makes sense for Nvidia to limit Adaptive-Sync support for their newer graphics hardware, it is disappointing to see Nvidia's Maxwell-series graphics cards excluded from Nvidia extended variable refresh rate support. Perhaps this move will push more Maxwell users towards the company's RTX 20 series of graphics cards, especially if they already own an Adaptive Sync/FreeSync monitor.

You can join the discussion on Nvidia's pre-Pascal graphics cards lacking support for Adaptive Sync on the OC3D Forums.

AlienALX
Wow looks like I totally lucked out then.

Man, I can't even imagine what my 32" would have cost if it were gsync when I bought it

Can't wait to try this out.Quote

Peace Đ
After starting to search the listed monitors on Nvidia's slide, I saw that the Acer XFA240 costs "only" 230Â€ for 24" and 270Â€ for 27" (ZeroFrame). 1080p, 144Hz and "GSync" is what I was looking for a long time :O And since Nvidia approved it, the experience should be awesome. Looks like I got myself a birthday present.


The news about Maxwell is truely sad, but you already mentioned a possible reason.Quote

Wraith
All this new stuff and here I am running at buttery smooth 120+ frames in almost every game simply using Fast-Sync..Quote

Whoomp there it is !

All tested and working

Bhebhe
Seems like the g sync monitor market will go down as those premiums were offered to A Sync monitors which is cheaper.Quote
Reply