Are these prices low enough?

For AMD's planned Radeon RX 6950 XT, a higher-end model of their Radeon RX 6900 XT, AMD has reportedly set a price of $1099. This is $100 more than AMD's original RX 6900 XT MSRP, with that money being pushed into 18 Gbps memory modules, and a notable boost in the speed of the graphics card's stream processors.

With the RX 6750 XT, AMD is increasing their prices by $70, placing the RX 6750 XT's MSRP dangerously close to the pricing of their Radeon RX 6800 (which costs $30 more). Whether or not the boosted performance of these new models justify a $70 price increase remains to be seen, though we would have liked to have seen AMD push for lower pricing than this.

On the lower-end of their GPU lineup, AMD's RX 6650 XT has a price premium of $20 over AMD's RX 6600 XT, making the premium easy to justify given the graphics card's memory and clock speed boost. $20 is not a lot of money, and this price premium is very acceptable. 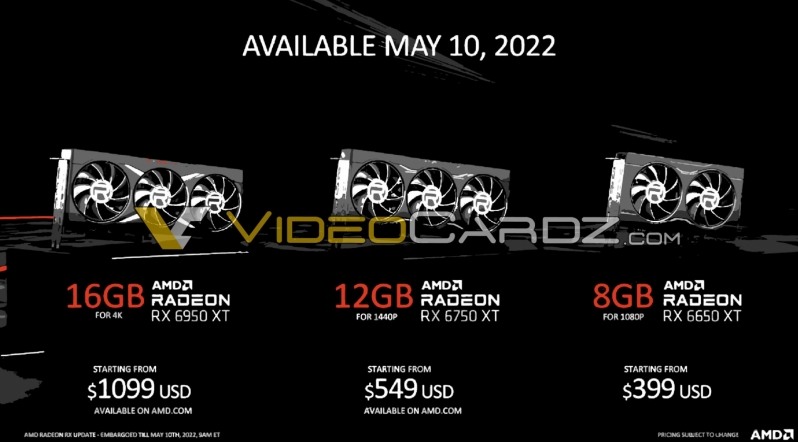 AMD's Radeon RX 6X50 series graphics cards are due to become available to purchase on May 10th.

Dicehunter
I'm sure OCUK will come up with a reason as to why they will be charging way way over MSRP.Quote

NeverBackDown
Quote:
To be fair there were valid reasons for that... Beforehand they were quite accurate.Quote

AlienALX
Is it even worth commenting on the price any more?

These days it doesn't matter how you react or what you say. Every one is in it for every single penny they can gouge out of every one else and no complaints will change anything.

Everything now is micro managed and scalped at every single part of the sale. From the people making the dies to the people assembling the cards to the people shipping them and then the retailers. Every one is adding as much on as they can.

I would hope that going into the future there would be laws on this but they were all abolished long ago. From energy price caps to MSRP. Everything now is fair game.

You never know though. With the soaring inflation and damage to the economy someone might wise up.Quote

Piskeante
The smartests thing to do is to wait for ETH to go PoS.
I've said it like a thousand times. You will be able to buy ANY GPU at half REAL MSRP.

There is absolutely no point on buying GPUs with inflated prices and scalped prices. It's just dumb.
I don't care about this cards and their prices. I will just pass and wait for people to begin selling their cards at 50% discount to buy whatever card i want for brutal deals.Quote
Reply