Radeon Pro driver support is coming to the Radeon VII, but there's a catch

Radeon Pro driver support is coming to the Radeon VII, but there's a catch

AMD's Radeon VII is positioned targetted at both gamers and creators, with the GPU's ample allotment of HBM2 VRAM allowing the graphics card to handle even the most complex of video rendering workloads, a factor that could stretch competing 8GB GPUs like the RTX 2080 past their limits for certain users.

With this "creators" target in mind, AMD has decided to support their latest high-end graphics card with their enterprise-grade Radeon Pro Software, enabling "One Driver" support, which enabled users to install both Radeon Pro and Radeon Software Adrenalin Edition drivers and quickly switch between them. This allows creators to benefit from the stability of Radeon Pro drivers and utilise the performance advantages of AMD's Radeon Software Adrenalin gaming drivers, which are frequently updated with new game-specific optimisations. 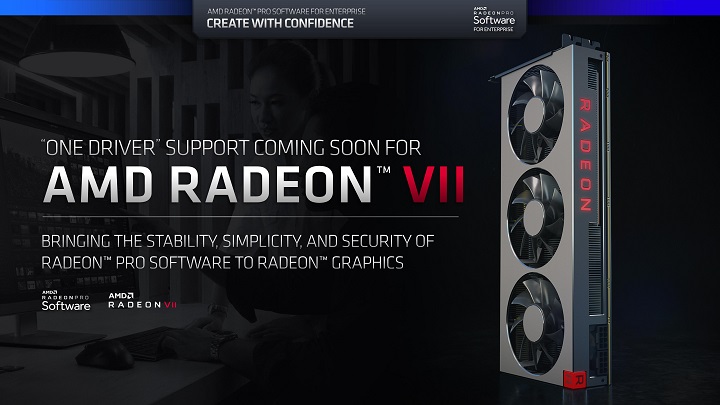 In a statement to a Reddit user called True Mantle, AMD revealed what Radeon VII users should expect from their Radeon Pro drivers, confirming that workstation optimisations, certifications, features and remote workstation support would be limited to Radeon Pro Graphics products.

This is a logical choice for AMD, as otherwise, the consumer-grade Radeon VII would cannibalise the sales of AMD's Professional grade graphics products.

AMD;'s intention with their "One Driver" support is to allow businesses to more easily integrate consumer-grade Radeon products into their install base by allowing them to use the same Radeon Pro drivers.

You can join the discussion on AMD's Radeon VII graphics card's planned "One Driver" Radeon Pro Software support on the OC3D Forums.

Dicehunter
But what is the point of having "Pro" driver support when it won't unlock any "Pro" features ? Seems like wasted dev time to me.Quote

WYP
Quote:
The Radeon Pro driver is about stability above pretty much anything else, and for companies, it is easier for their IT guy to install a single Radeon driver for everything instead of using gaming for some and pro for others.

Who knows, AMD could backtrack and enable more features in the future, really depends on how many Radeon VII's they want/need to sell.Quote

66racer
Quote:
Yeah makes no sense to me. So basically for example some of the solidworks features like realview still wont work with this stripped PRO driver support, why bother. Autodesk applications do just fine and stable with Geforce drivers as well so this just seems like marketing from AMD to make their Radeon cards seem more WS friendly.

Dont get me wrong, I am a big supporter of this GPU specifically for its 16GB VRAM which some users need with real time rendering and all. I just have to get time to bench a RTX 2080 vs R7 in Enscape and such.Quote

Dicehunter
Bit of a thread necro but has anyone heard anything more about this ?Quote
Reply