On the high-end, AMD RX 7900 XTX graphics cards are available for as much as £1299.95, which puts it on par with many Nvidia RTX 4080 graphics cards. As we have said in our RX 7900 XTX review, with prices this high, gamers should probably buy a lower-tier RTX 4080 instead. The RX 4080 offers more ray tracing performance and similar rasterisation performance, making it a better purchase if you plan on spending that much.

Based on the table below, it is clear that some manufacturers believe that their Made by AMD (MBA) RX 7900 XTX graphics cards are worth more than others, with ASRock and ASUS charging much more than PowerColor and Sapphire. With all of these GPUs being "Made by AMD" (MBA) models, pricing shouldn't differ that drastically. This is a clear case of "brand tax", where the extra money goes towards a premium brand name and not any major hardware changes. 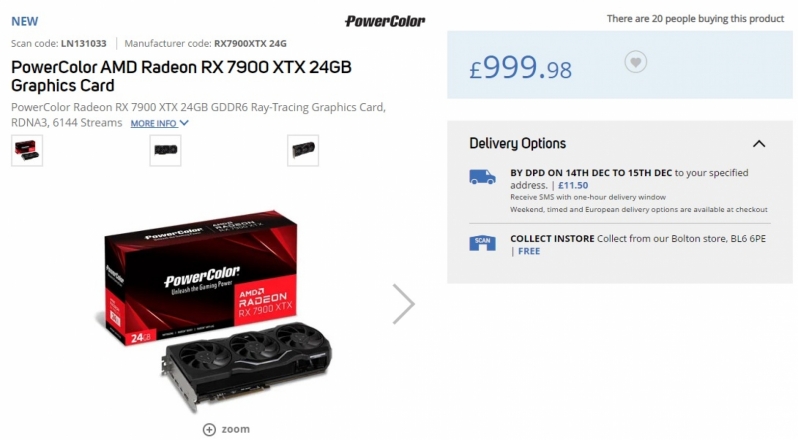 Please, don't buy an RX 7900 XT for pricing that is close to or higher than an RX 7900 XTX. That's simply a bad purchasing decision. As we have said before, AMD should have priced their RX 7900 XT with an MSRP of £799.99, if not lower, so that this graphics card could be a stronger offering for the value performance crowd. If you are thinking of buying an RX 7900 XT, save a little more money and buy an XTX when it is in stock.

Right now, there does not appear to be a lot of RX 7900 series stock in the UK, with cheaper RX 7900 XTX models selling out quickly while many RX 7900 XT models remain on shelves. Gamers have gobbled up AMD's RX 7900 XTX graphics card quickly, and the fact that MSRP RX 7900 XT graphics cards are still available from Overclockers UK is a clear sign that AMD gave their 2nd tier graphics card a price that was too high to sell out.

Over the next month, retail availability for AMD's RX 7900 series graphics cards is expected to improve. With today's launch happening so close to Christmas, it has been challenging for AMD and their partners to to bring a larger supply of graphics cards to stockists worldwide in time for launch. Expect more GPUs to land at retailers soon, and expect RX 7900 XTX graphics cards to continue to sell quickly.

You can join the discussion on AMD's RX 7900 series GPU prices on the OC3D Forums.