Is this AMD's take on Nvidia's Founders Edition?

In effect, this graphics card is an RX 5700 XT graphics card with a fancier cooler design and a moderate overclock, which delivers gamers enhanced gaming performance and the prestige of getting a limited edition Radeon component.

The RX 5700 XT 50th Anniversary Edition will cost $499 and be available exclusively on AMD's website. 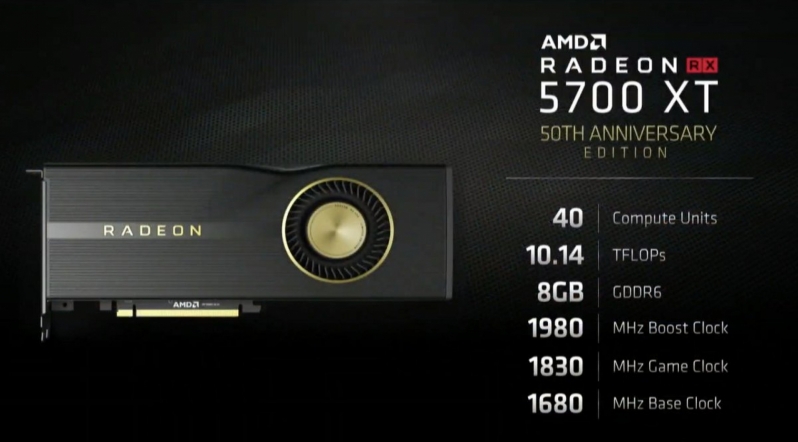 You can join the discussion on AMD's Radeon RX 5700 XT 50th Anniversary Edition graphics card on the OC3D Forums.

NeverBackDown
Slap a block and hit 2ghz. First amd GPU to ever hit 2ghz. That'll be an amazing feat.Quote

cooperman
To expensive and a blower fan? come on AMD,i expect to be paying 30-70 bucks more for a partner card.
I think my next gpu will be vega 56 red dragon when thay are on sale tbhQuote

Warchild
Quote:
Nothing wrong with a blower fan if you plan to hook two up together.Quote

So, now i want to see those guys telling me that AMD would give us RTX 2070 performance for 150$ less.

I want to see them. Come on in guys. Let's share some severe punishment for those hypers.Quote

cooperman
Quote:
No thank you i dont need my ears bleeding + SLI and Crossfire have been killed of for gameing not that it was ever 'good'Quote
Reply