"Anything above 30FPS does not matter for the gaming experience"

Vendetta - Curse of the Raven's Cry, a game that was previously released as Raven's Cry is a game that many gamers say is in dire need of some optimization, but it seems that this will not be coming in the future as a developer has claimed that having any more than 30FPS will add anything to the experience.

While a statement like this is not something that can be seen as unexpected by a game that was released twice, is known to be very buggy and  and has even been placed on more than a few Worst Games of 2015 lists, but as always such statements need to be condemned.

While it is good that the developer has stated that they have focused on the gameplay and questlines, it still does not mean that stability and any form of graphical efficiency need to be abandoned. A game which a developer says that a GTX 980Ti may be slower than a much older GTX 780 is simply badly designed.

And I may add something: it was not our intention to create a graphic benchmark. VCR is a complex RPG with unique characters and story driven. Our focus is on interesting quest chains (which are very difficult to create) and not on frames per second. Beside this I thing that anything above 30 FPS does not matter for the gaming experience. And on my PC i7, GF 780GTX the game runs with 4K never below 30 FPS. No idea what it does on a GF980ti – I heard it is sometimes slower. 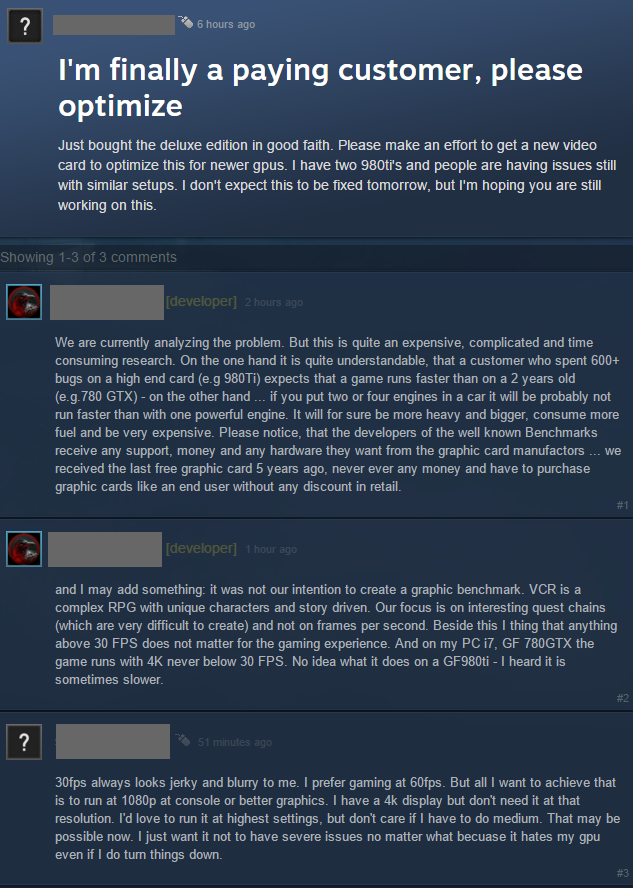 We are currently analyzing the problem. But this is quite an expensive, complicated and time consuming research.

On the one hand it is quite understandable, that a customer who spent 600+ bugs on a high end card (e.g 980Ti) expects that a game runs faster than on a 2 years old (e.g.780 GTX) – on the other hand … if you put two or four engines in a car it will be probably not run faster than with one powerful engine. It will for sure be more heavy and bigger, consume more fuel and be very expensive. Please notice, that the developers of the well known Benchmarks receive any support, money and any hardware they want from the graphic card manufacturers … we received the last free graphic card 5 years ago, never ever any money and have to purchase graphic cards like an end user without any discount in retail.

While full SLI support is not something that is expected to be implemented into a small, non-AAA game, we do expect a newer GPU to work well than it's older generation counterpart.

Raven's Cry is a game that we cannot call anything special, with a measly score of 3.5 on Metacritic and its re-release achieving little better with a user score of 4.6.

You can join the discussion on the Developers of Raven's Cry stating that "Anything above 30FPS does not matter for the gaming experience" on the OC3D Forums.

Raven's Cry dev says that "Anything above 30FPS does not matter for the gaming experience" https://t.co/1TBjweeQMU pic.twitter.com/FIquYlfEJh

JR23
See is what happened here is the developer has a GTX780, which we all know, is the best graphics card ever to grace the earth. The frames are so beautifully timed and consistently delivered he thinks that 30fps looks better than going to the cinema or watching youtube and he is correct.

But it also sounds like he has been so busy developing his game abut pirates that he hasn't yet seen GTA V on PC and witnessed the beauty of Ultra grass at over 100fps. Oh well, if he isn't that bothered about the best possible reproduction of the content he has created I am not too bothered about seeing it.

WYP
TBH I'm quite ed off by his "Nvidia don't give me free GPUs so sod optimization" attitude is pitiful.

Do you know who bought the R9 Fury X, GTX 980Ti and other GPUs for my game performance stuff? Me, not AMD, or Nvidia. Will my work pay for them? perhaps eventually, but I bought them and kept them because I love what I do and am willing to invest in the tools for the job.

The guys clearly doesn't have enough passion for his work, at least from a performance perspective.Quote

barnsley
Are you guys -really- going to listen to the developer of that game?

Just don't. Raven's Cry was at best, a joke. It was taken off the steam store on first release and it is one of those games that has ended up being notoriously buggy and broken. This developer (I think the original devs went bust IIRC) is doing this for publicity.Quote

xnax2802
Is he joking or does he not have eyes? Jesus christ, he's an idiot.Quote
Reply