Following reports of melting power connector issues with Nvidia's new RTX 4090 graphics cards, AMD's Scott Herkelman has confirmed that the company has no plans to utilise the connector on any of its RX 6000 series or planned RDNA 3 based graphics cards.

So far, the melting power connector issues that have affected some RTX 4090 users have been attributed to the 12VHPWR (12 Volt High Power) connector that most of these graphics cards utilise. This power cable is as small as a standard 8-pin (6+2-pin) PCIe power connector, but features more pins and can output four times as much power. This has lead many analysts to allege that the connector is more prone to failure than older power connector standards, and that the cable may unsafe to use if too much stress is placed on the connector.

With AMD confirming that none of its RDNA 3 graphics cards will utilise the 12VHPWR connector, AMD has successfully side-stepped the "12VHPWR melting" drama that is happening within most PC hardware communities. These cable melting issues have now been deemed as Nvidia's problem, as AMD's upcoming graphics cards will not utilise the new power connector. 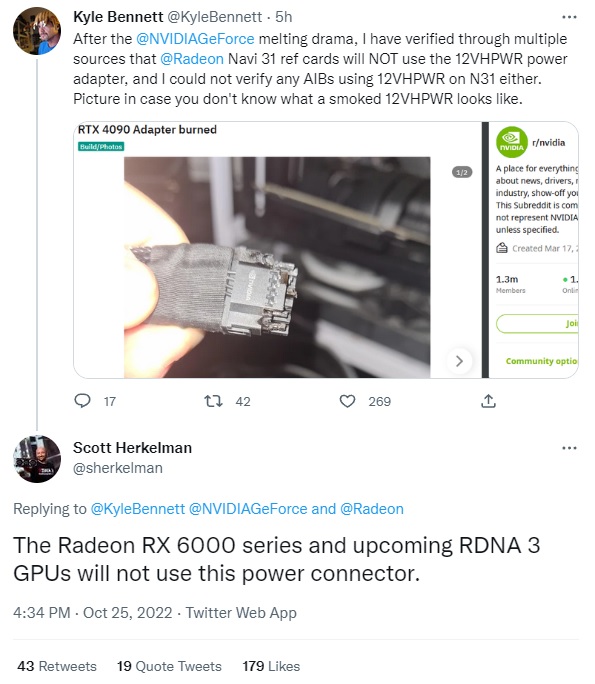 AMD plans to reveal its RDNA 3 based graphics cards on November 3rd, and it is in AMD's best interest to make Nvidia look bad at this time. It makes sense for AMD to throw Nvidia under the bus over this weeks 12VHPWR reports, especially when none of their upcoming GPUs are set to use the connector. Scott Herkelman's comments are also unlikely to ever come back to bite AMD, as his statements do not allege that 12VHPWR connectors are unsafe in any way. He has simply stated that AMD will not be using them with their RX 6000 series or RDNA 3, leaving everything else up to the imaginations of readers and analysts. A clever move indeed.

What's wrong with the 12VHPWR connector?

If 12VHPWR cables are bent near their terminals, stress can be applied to the power connector that can harm the cable connection to your graphics card and result in thermal build up. In some cases this has resulted in melted PCIe 5.0 12VHPWR connectors and damaged graphics cards, as seen in the image above. This has led consumers and analysts to question the reliability of the 12VHPWR connectors used on Nvidia's RTX 4090 graphics cards.

You can join the discussion on AMD's confirmation that their RDNA 3 GPUs will not be using 12VHPWR connectors on the OC3D Forums.

Dicehunter
This whole thing could be solved if the cables were properly built and flexible, The ones you get in the 3090Ti/4000 series boxes are badly designed.Quote

MiNo
Insane to have 600 watt cards to begin with.Quote

AngryGoldfish
Quote:
I personally like that Nvidia have pushed the envelope that high. It gives consumers a choice. The 4090 can be quite efficient if you're willing to spend a bit of time with it. I've said this before, but overclocking is kinda dead now; it's all about undervolting. Companies are pushing their cards way past their sweet spot. But that doesn't mean you are or stuck with that. We can bring back them back into that sweet spot if we wanted to. I mean, ADA Lovelace is going to be in mobile devices as well. That tells you that 600W is just a bragging rights claim. Many have been running 4090/12900k systems on 850W PSU's by spending 10 minutes adjusting a few sliders.Quote

NeverBackDown
Well yes they are pushing them past their limits, but if the goal is undervolt and hold stable lower clocks, that reduces performance, when people are buying cards based off "over" the sweet spot.

Catch 22. Some cards might reach those clocks at low voltage. Most won't.Quote

Dawelio
Quote:
Quote:
It's the same with cars, you wouldn't buy a supercar just to lower it's performance. At that point, you can just buy the lower tier car from the same manufacturer for cheaper lol.Quote
Reply