The GPU market is in a sorry state

Nvidia's RTX 3070 Ti graphics card has just launched, and they all sold out at a lightning-fast pace at all UK's largest components retailers. Nvidia and their AIB partners could not supply enough graphics cards to keep up with demand, doing little to alleviate the world's GPU shortage.

At launch time, we frantically refreshed the websites of all major UK retailers to see if they had RTX 3070 Ti stock and to see how much they were selling those graphics cards for. Unfortunately, we only saw visible stock at two retailers, and it was all gobbled up in moments.

These retail listings also highlighted startling pricing trends throughout the industry, with many retailers selling RTX 3060 and RTX 3070 graphics cards at absurd prices.

While we plan to have a deeper look at the reasons behind these crazy pricing trends, today's look will focus on which retailers had RTX 3070 Ti GPUs in Stock, which retailers sold them at MSRP, and how much they are selling their other graphics cards for. Screenshots of every website mentioned are available within this article as evidence for pricing.

When the RTX 3070 Ti's retail embargo lifted, Box's website remained unchanged. Their RTX 3070 Ti graphics card listings all have a £TBC (To Be Confirmed) price tag, and no stock was visibly available at launch.

Looking at Box UK's other graphics cards listings and we found some shockingly high prices. For starters, we have a £1,349.99 ASUS RTX 3070 TUF OC, which has an MSRP that is higher than Nvidia's RTX 3080 Ti. This is nothing short of insane, and we can see why this graphics card is still in stock.

Aside from that insane RTX 3070 price, we also found multiple RTX 2060 listings that were in stock with prices of £549.99 and £569.99. Those prices are higher than Nvidia's RTX 3070 Ti Founders Edition MSRP, and Nvidia's RTX 2060 is a last-generation part that is significantly further down Nvidia's product stack. This is shameful. 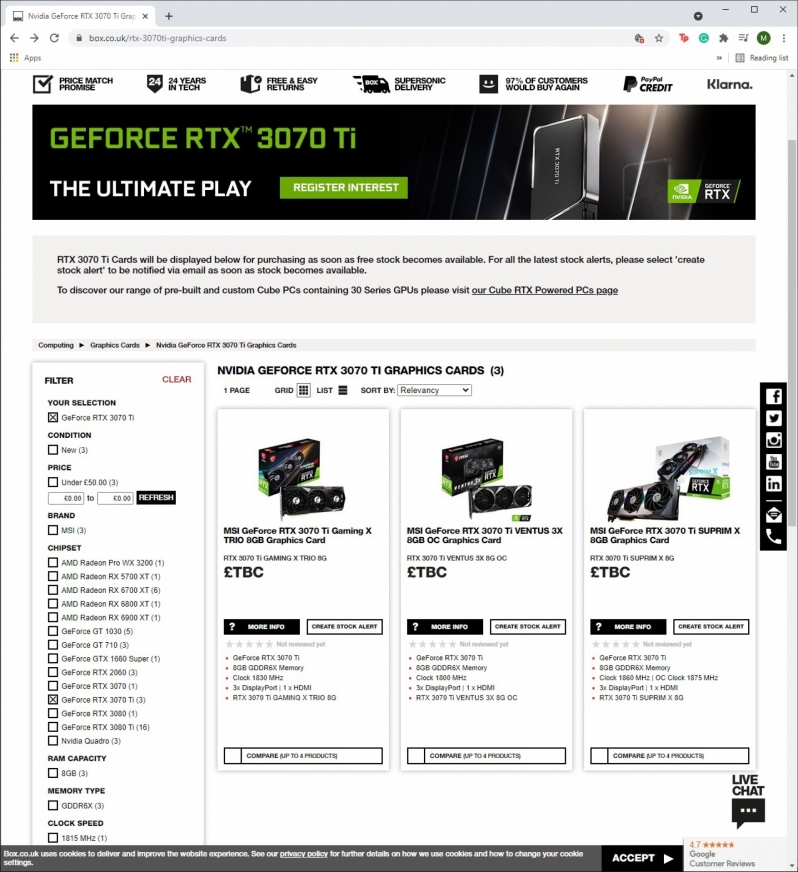 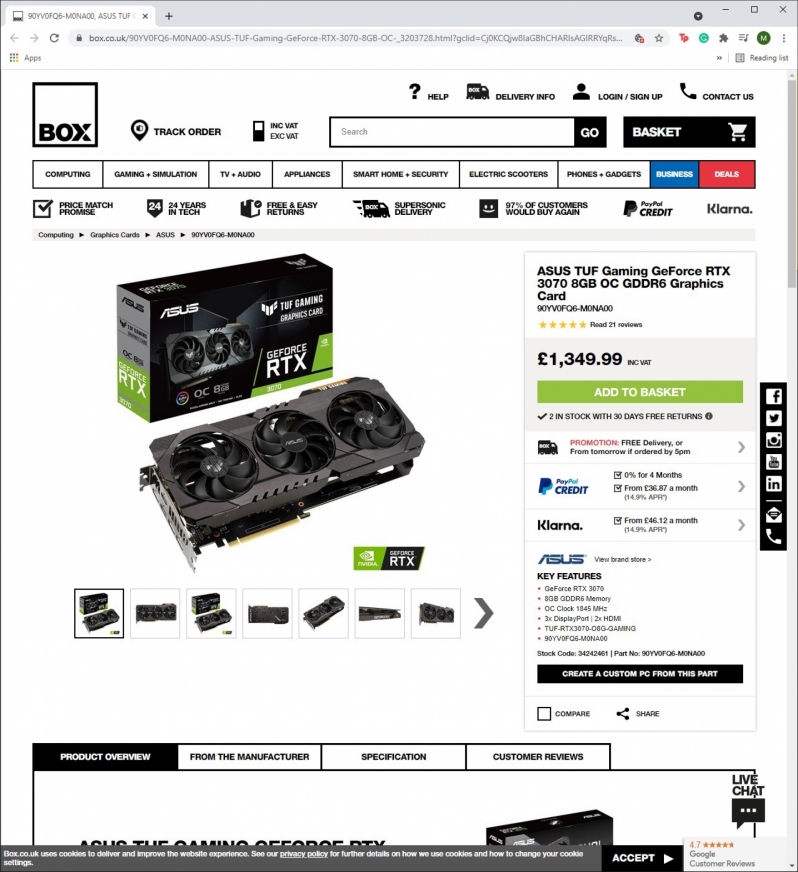 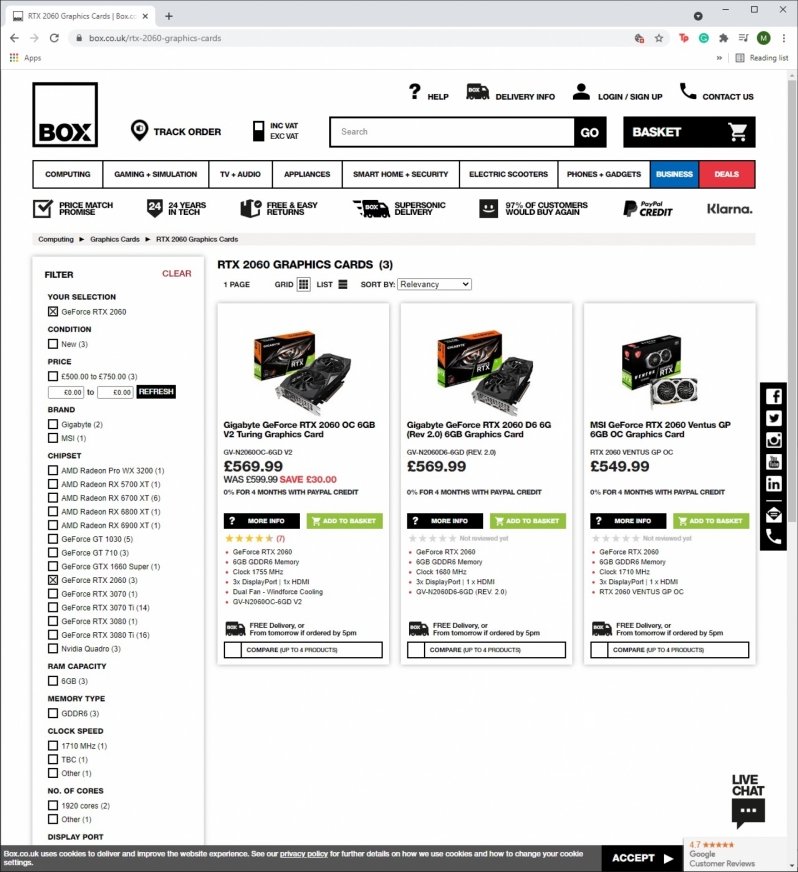 At CCL Computers, MSI's RTX 3070 Ti Ventus 3X was briefly for sale at £529.99. This stock quickly disappeared, and CCL later listed the graphics card as discontinued, hiding the GPU for everyone without a link to the original listing.

Credit where credit is due, CCL sold some RTX 3070 Ti GPUs at MSRP, and their other GPU listings are not as overpriced as what we have seen at Box. That said, those in-stock graphics cards are at insane prices. 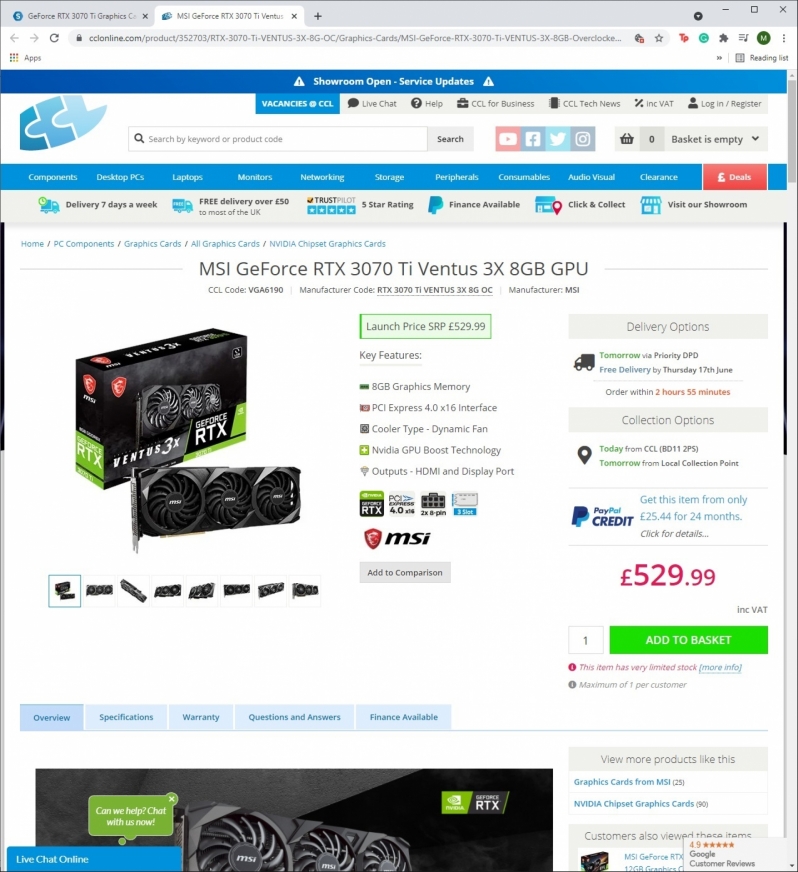 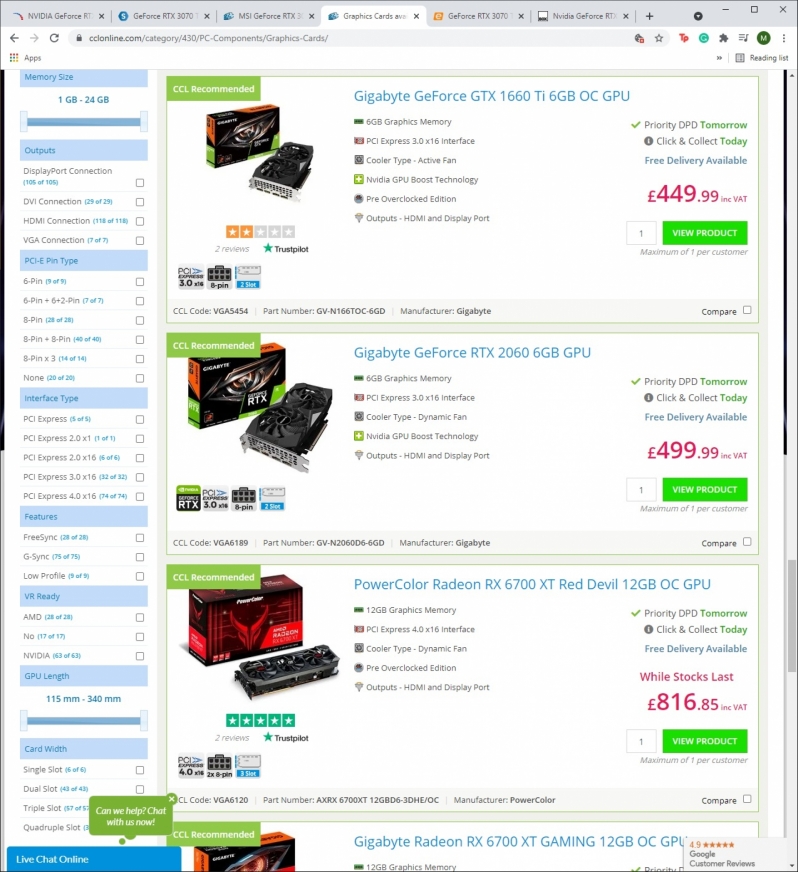 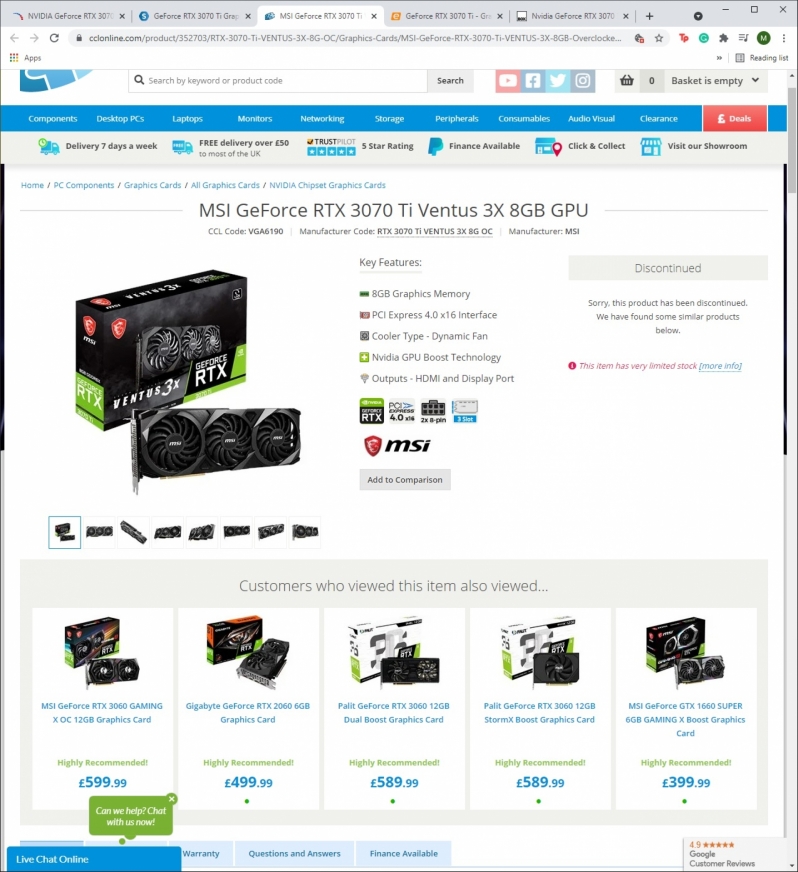 With prices like these at three retailers so far, it is no surprise that PC gamers are frustrated. 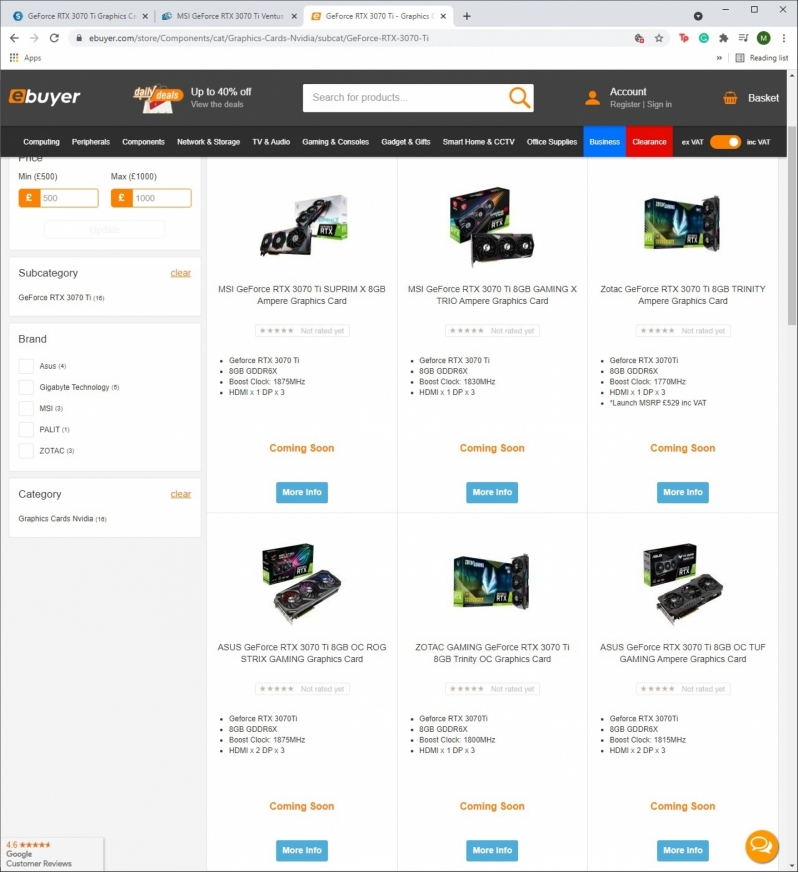 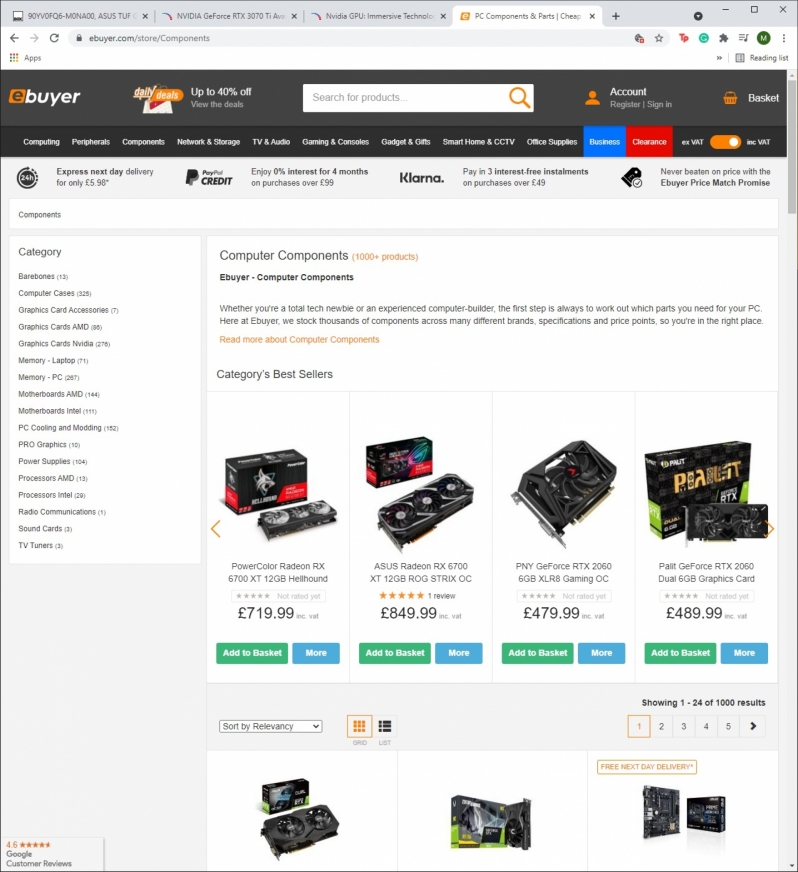 At Overclockers UK, we found no visible stock on their website when Nvidia's RTX 3070 Ti retail embargo lifted. Like the websites above, we will discuss the prices of the graphics cards that they do have in stock. Have you spotted the trend yet?

We looked at Nvidia's graphics cards, sorted out the websites list of GPUs by availability, and we saw multiple RTX 3060 graphics card listings with prices of £629.99 and above (as shown in the screenshots below). 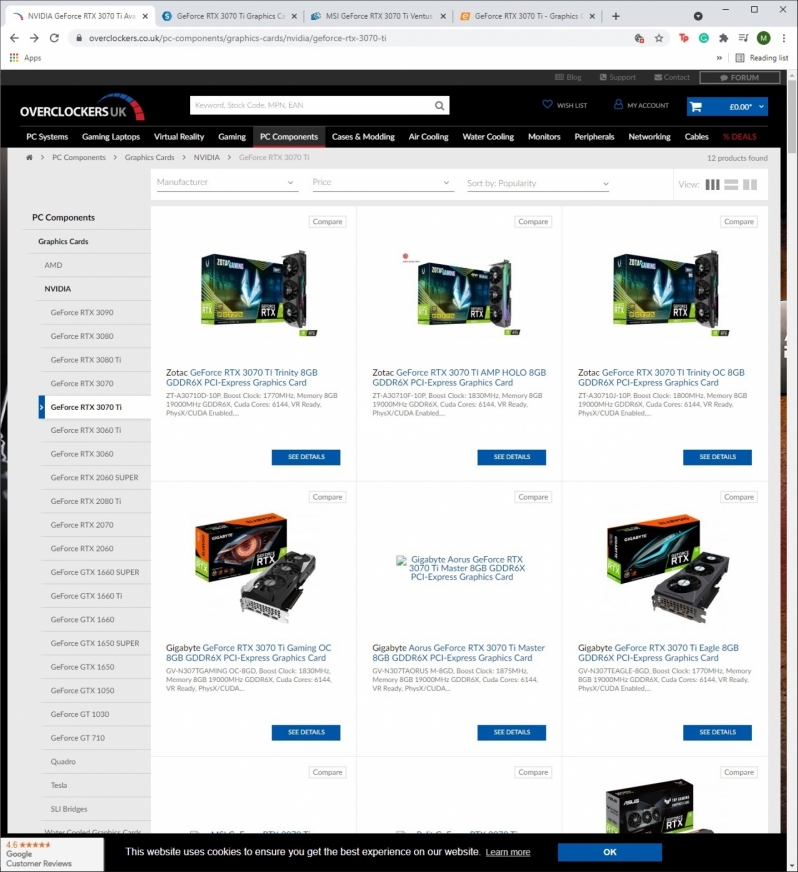 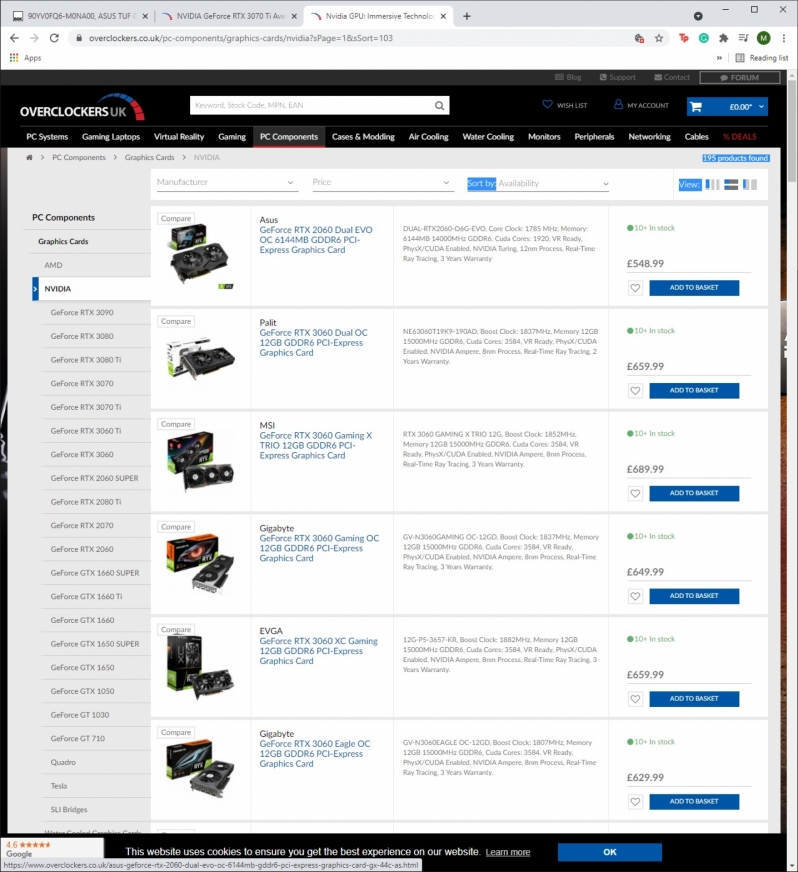 Scan UK (The Best of the Bunch)

Finally, we have Scan UK, which had by far the most RTX 3070 launch day stock and the most cards available at Nvidia's MSRP price of £529. Yes, Gigabyte's RTX 3070 Ti Gaming OC and Aorus Master have much higher prices, but those prices reflect what we believe to be Gigabyte's MSRP values for both cards. Remember that Gigabyte's Gaming OC and Aorus Master models are premium models, sporting more advanced features, factory overclocks and larger cooling solutions.

One of these bundles pairs an AMD Ryzen 5 5600X, an EVGA 850W BQ PSU and a 1TB Western Digital Black SN850 SSD with a Gigabyte Aorus RTX 3060 ELITE graphics card for £949.99. Removing the bundled components at their current costs on Scan's website gives the Aorus RTX 3060 Elite a value of £416.02, which is a reasonable price given the current market situation.

While Scan's bundles restrict much of their limited GPU stock to those in need of full system upgrades, it offers the purchasers of these bundles reasonable GPU prices. Remember that Gigabyte's RTX 3060 Elite is a premium graphics card model. 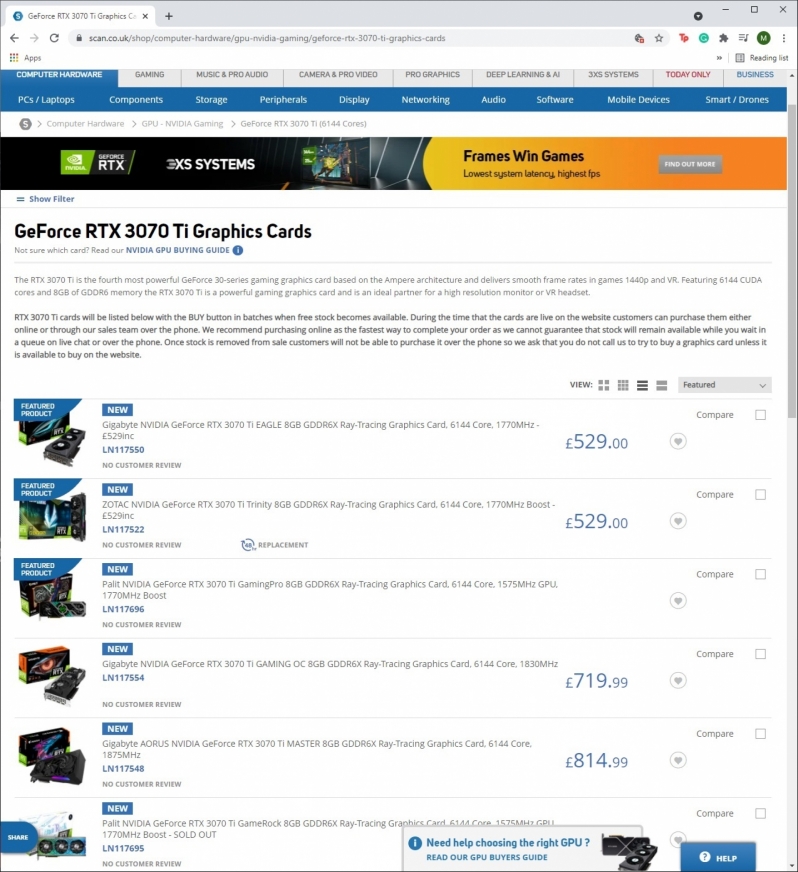 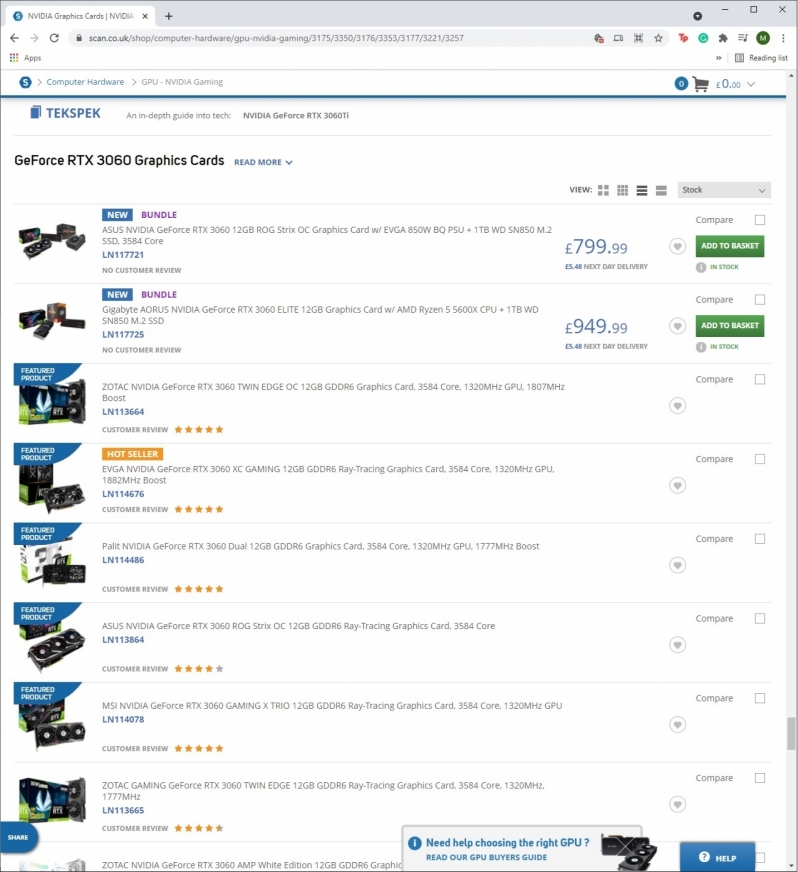 In the future, we are planning to discuss the reasons behind the GPU market's bizarre retail pricing. For now, this article should give you a good indication of what the market is currently like, and how crazy the prices at some retailers are.

You can join the discussion on today's bizarre GPU prices on the OC3D Forums. 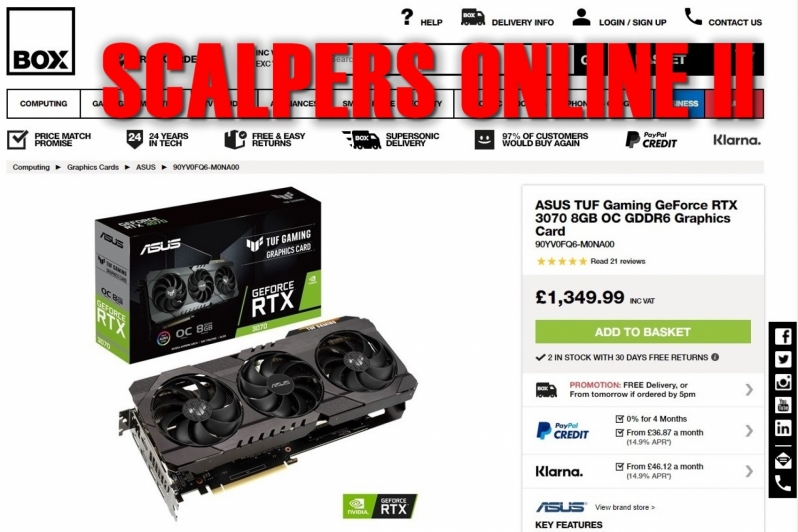 Dicehunter
I know it sounds sensationalist but the way things are going this is going to kill PC gaming.

A good friend of mine really wanted to get into PC gaming recently, He took 1 look at the price of a basic PC build and shook his head in disbelief, He managed to get a PS5 and LG OLED which gives him a really good gaming experience and acts as his media centre also, All for a really good price.Quote

WYP
Quote:
Yeah, GPU pricing is crazy right now. I know plenty of people who want to upgrade but can't, and nobody I know wants to get into PC gaming after seeing the cost.

If I were in the market to buy a new system, I probably wouldn't. Unless there was a reasonably priced pre-build somewhere.Quote

Legacy-ZA
At least you folks get a chance @ MSRP, here in South-Africa we just get ed right off the bat.Quote

Flux
I was on Scan at the time of release for the RTX 3070 ti that I was hoping to purchase, and it sold out in less than two seconds after going threw the captcha process with boats.

Seems like they had less stock than the 3080 ti launch last week, lots of the cards on Scan didnt even have a price at launch time today.Quote