Benchmarks for Nvidia's 20GB RTX 3080 Ti graphics cards have been circulating online, originating from Bilibili and the Chinese creator "Big Hardware Player", who allegedly has gotten his hands on a Colorful RTX 3080 Ti engineering sample.

If this leak is true, Nvidia's RTX 308 Ti will be an RTX 3090 with 4GB less VRAM, a smaller memory bus and slower GDDR6X memory. This would give the graphics card performance levels almost identical to Nvidia's RTX 3090 graphics card outside of memory limited workloads.
At this time, this data should be treated as suspicious. Not only would this GPU design make the RTX 3090 all but obsolete, but the data shown here could be easily fabricated by anyone with the right knowledge. 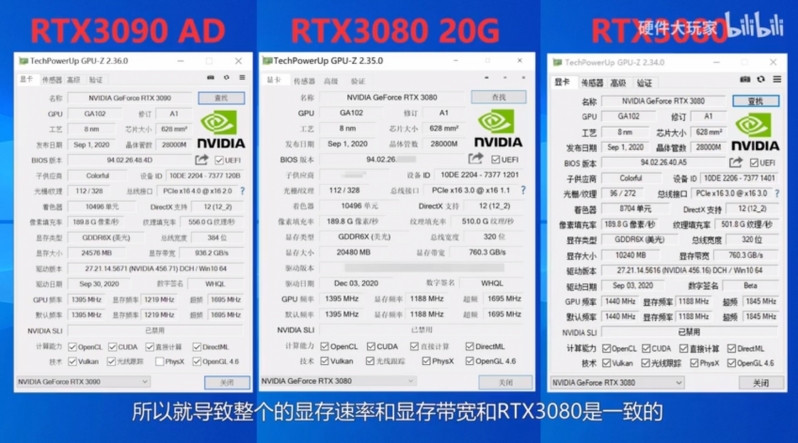 Twitter leaker @harukaze5719 took the 3DMARK results from this video and compared them to an RTX 3090 graphics card, highlighting that these results are exceptionally close to Nvidia's current Geforce flagship. This makes sense given the minor differences between the specifications of this alleged Nvidia's RTX 3080 Ti and Nvidia's RTX 3090. 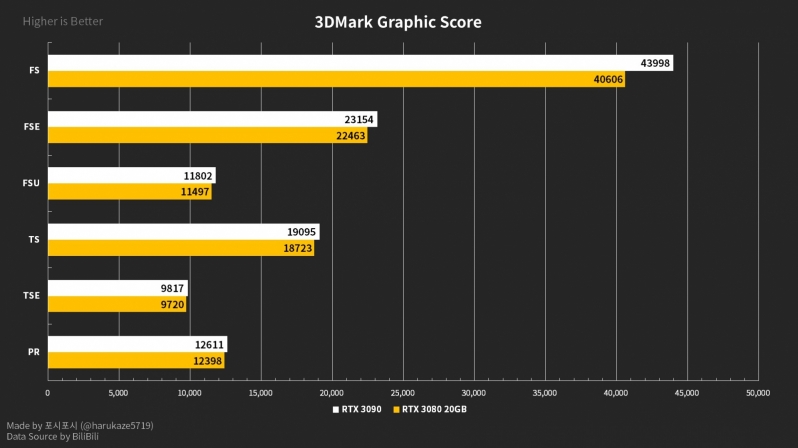 You can join the discussion on Nvidia's rumoured RTX 3080 Ti benchmarks on the OC3D Forums.

FTLN
Come on WYP, I mean what is the point of copy pasting this article which has been doing the rounds since yesterday. Just look at the memory capacity the 0 is overlapping the 4. Are you really that short of clicks around here ?Quote

trawetSluaP
For people like me who use this forum as their main source. I hadn't seen this elsewhere.

Why be so rude? Totally unnecessary post.Quote

Gothmoth
who cares at this point... the shelves are empty and available! 3060 TI cards cost near to 1000 euro.Quote

Piskeante
Don't worry, noone will be able to buy it, so let's better talk about the weather then.Quote

WYP
Quote:
It's a blurry image that was taken from an online video which was itself taken from a camera pointed at a screen.

I have since double-checked, and other sources are using a similar image. On Videocardz they used a less blurry and lacks the overlap that you are talking about.

For using their image, I will link to Videocardz's article. https://videocardz.com/newz/nvidia-g...legedly-tested

As mentioned in the article, any RTX 3080 Ti/Super graphics card will offer performance that is very close to the RTX 3090. I believe that there are aspects of this article/rumour that will remain relevant even if the source turns out to be false.

I have also stated in the article that these results are suspect and that they could easily be fabricated.

TBH I don't even know why I am responding to this comment. These are alleged benchmarks that even I said were suspect. Regardless, I feel that the results shown are pretty much what I'd expect from any RTX 3080 Ti or Super series GPU, so I think this is worth talking about.

A graphics card like the one alleged in this case would make the RTX 3090 almost pointless, as would a standard RTX 3080 with a 20GB frame buffer.

As a side note folks, please try to be constructive with criticism. Feel free to criticise or question my work as much as you want, but I don't want to be verbally attacked here.Quote
Reply