Black Friday sales events have sprung into action across the UK, bringing forth some killer hardware deals for PC gamers, with Overclockers UK starting things with a bang by delivering Sapphire's RX Vega graphics cards with some incredibly low price tags.

Better still is the fact that these GPU deals combine with AMD's latest GPU bundle to deliver over £100's worth of free games with the package, including Resident Evil 2, The Division 2 and Devil May Cry 5.

In recent games like Battlefield V and Forza Horizon 4 (see our PC performance Reviews), AMD's RX Vega 56 has competed with Nvidia GTX 1080 with favourable results for Radeon, giving the RX Vega 56 Pulse from Sapphire a clear advantage over the competition in terms of value for money, even without AMD's Radeon "Raise The Game" software bundle. Simply put, these GPU deals offer levels of value that are pretty much unparalleled today. 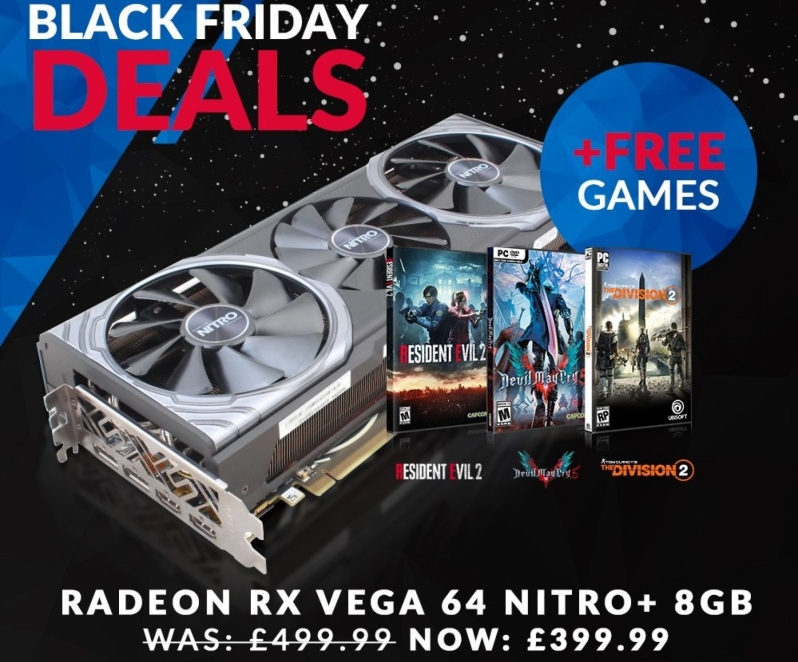 You can join the discussion on Overclockers UK's killer Sapphire RX Vega GPU deals on the OC3D Forums.

AlienALX
Fantastic. It's so nice seeing Vega become affordable and kick ass at £ per perf.

Awesome stuff. Will see how things go, but may upgrade my Fury X to that 56.Quote

Bagpuss
Err, the fact that AMD drivers are absolutely useless with (3D based) emulators thanks to their appalling OpenGL support.


As long as that's the case, given I only really game via emulation thesedays, I have to stay away from AMD GPU's.Quote

Daiyus
Quote:
I've emulated on an A10-8600k and on my current Ryzen 5 + Vega 56 rig. I've got games from various consoles running no problem. I can't argue that Nvidia is probably still better for those kind of workloads, but saying is AMD is "useless" is somewhat disingenuous.Quote

Bagpuss
Quote:
The point is, whenever there is a problem with 3D rendering in an emulator, its always on an AMD card because of their 3rd rate OpenGL driver.


..That and the fact that just about all emulator authors develop them on Nvidia GPU's themselves.


If you're heavily in to emulating the likes of PS2, Gamecube & WiiU, going down the AMD route will give you headaches that you wont have to deal with on a Nvidia card.Quote

I'm in no way saying AMD is better here. It's pros and cons like always. I just don't like it when people say extreme statements that are not true. AMD are more of a headache for emulation, but they are not useless as my personal experiences testify.Quote
Reply