Samsung has just launched three new gaming monitors, one of which is a 4K 240Hz gaming beast

Today, Samsung has launched three new gaming displays into the global monitor market, all of which are part of the company's new Odyssey Neo series of gaming displays.

Starting at the high-end, we have the Odyssey Neo G8 (G85NB), the world's first 4K 240Hz gaming monitor. the screen uses a 32-inch 100R curved VA panel that features Quantum Matrix technology, FreeSync Premium Pro support, and a Quantum Mini LED backlight. Samsung advertises this screen as a Quantum HDR 2000 monitor, due to the screen's peak brightness levels of 2,000 nits.

Below the Odyssey G8 is the G7 (G75NB), another 4K 32-inch gaming monitor that features a maximum refresh rate of 165Hz and a Quantum Mini LED backlight. This screen is also advertised as a Quantum HDR 2000 display, and features the same CoreSync lighting technology as the Odyssey Neo G8. The G7 will be a more affordable version of the G8 that offers users a lower maximum refresh rate while maintaining many of the same hardware specifications.

To cater to more mainstream gamers, Samsung's Odyssey G4 (G40B) gaming display offers gamers a resolution of 1080p and refresh rates of up to 240Hz. This screen is AMD FreeSync Premium  certified and features Nvidia G-SYNC Compatibility, but lacks the same Mini LED backlight technology as the G7 and G8. The Odyssey Neo G4 features an IPS display panel that is HDR10 compatible. That said, Samsung has not revealed this screen's peak brightness, so don't expect premium HDR quality levels from this screen.

Below is what Samsung had to say about their new trio of Odyssey Neo gaming monitors. 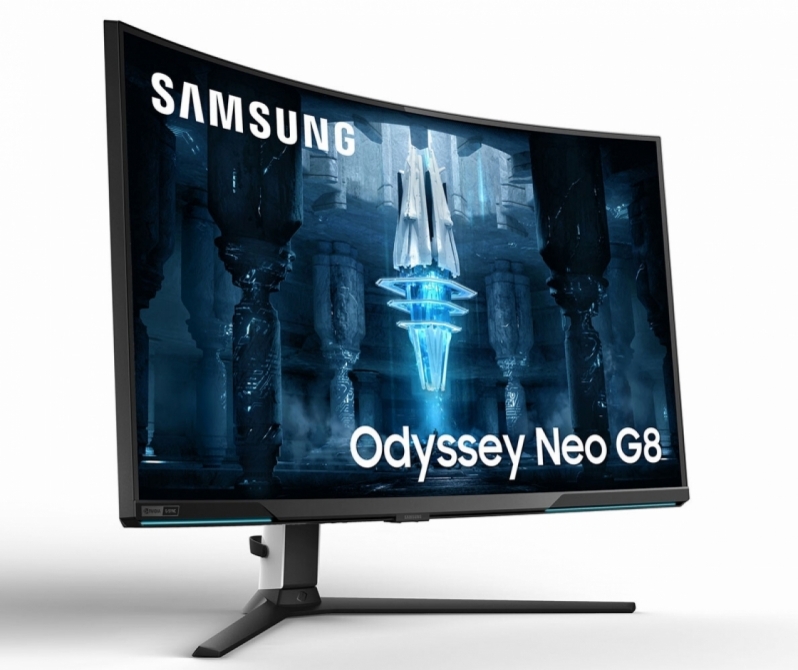 "Samsung is excited to unveil the world's fastest 4K gaming monitor to unlock even more opportunities and deliver innovation to the market, creating a new and incredibly immersive experience," said Hyesung Ha, Executive Vice President of Visual Display Business at Samsung Electronics. "Gamers ultimately desire that immersive experience in unity with their character and scene, and the Odyssey enables this with superior features and lifelike picture quality to give players a thrill."

The new 32-inch Odyssey Neo G8 is the world's first and fastest monitor that combines a 4K (3,840 x 2,160) 1000R curved VA panel featuring Quantum Matrix Technology, with 240 Hz super-fast refresh rate and 1 ms response time (GtG). The 4K resolution is also supported by a color gamut up to 95% of DCI-P3 color gamut. The design of the Neo G8 was inspired by the iconic style of the Odyssey Neo G9, offering an effortlessly cool exterior which is packed with premium gaming performance features.

Together with AMD FreeSync Premium Pro, the gaming monitor's outstanding 4K 240 Hz refresh rate and ultra-low 1 ms response time allow players to get real-world accuracy to maximize their potential and compete at the highest level in any gaming environment. The Neo G8 also utilizes Quantum Mini LED technology, enabling ultra-fine and precise control of the densely packed LEDs, ensuring gamers see both dark and bright scenes as they were intended. In addition, Quantum HDR 2000 with a 2,000nit peak brightness and a million-to-one static contrast ratio brings out the most subtle details for unparalleled immersion.

The CoreSync lighting found on the backside of the monitor automatically detects colors on the screen and projects them in real life to create a deeper sense of immersion.

The Odyssey Neo G8 is also built to provide a wide range of innovative features to enhance any gaming experience. The monitor is equipped with new display technology called Matte Display which provides both anti-glare and anti-reflection protection, minimizing distractions and keeping users focused on the content in front of them. Plus, the monitor offers a Height Adjustable Stand (HAS), as well as Swivel and Tilt functionality for ergonomic efficiency and Video Electronics Standards Association (VESA) compliant mounting. Users can customize their space for maximum comfort and productivity, supported by the flexibility of the Neo G8. 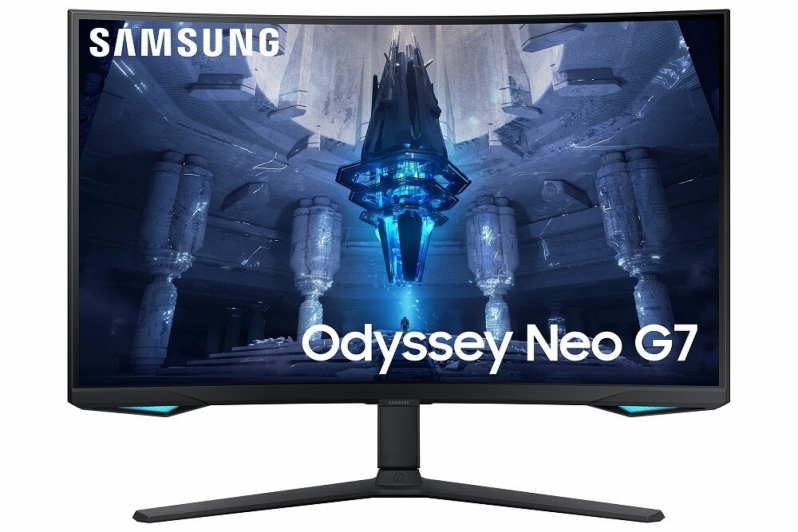 This performance is powered by many of the same features as the Odyssey Neo G8 model, including AMD FreeSync Premium Pro, Quantum Mini LED technology, as well as Quantum HDR 2000 with 2,000nit peak brightness and a million-to-one static contrast ratio for superior immersion that plunges players into the virtual world of any game they play.

The deep immersion is enhanced by the CoreSync lighting found on the rear of the monitor, bringing content to life with bright and vivid colors that create more memorable experiences.

The ergonomic stand, in addition to Auto Source Switch+, ensures the monitor works for the user and removes any friction while using for maximum performance, productivity and comfort. Players can also get to their content faster, without have to flip through multiple inputs, by simply turning on the PC for the monitor to instantly recognize and switch between the inputs. 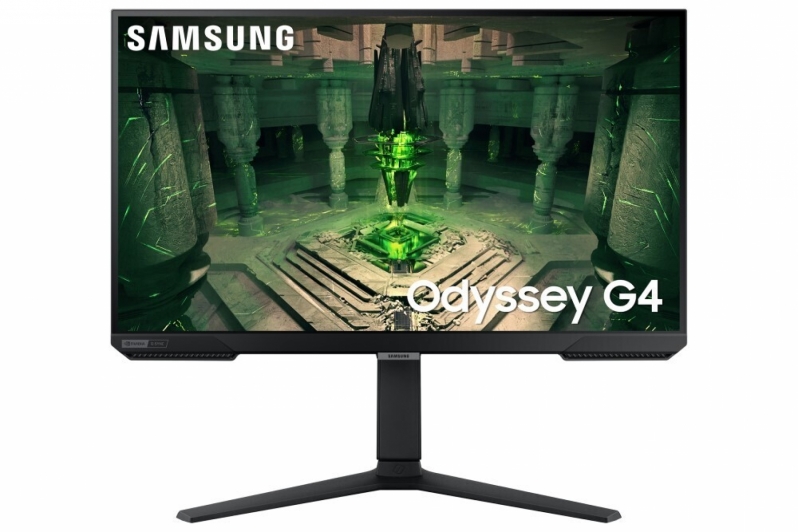 The G40B provides a brilliant option for gamers looking for a monitor with all the essential gaming features, packaged within a futuristic design. Available in 25- and 27-inch sizes, the Full HD resolution (1,920 x 1,080) G4 offers super-fast 240 Hz refresh rate, 1 ms response time (GtG), IPS panel with wide viewing angle and HDR10 support for a high-level gaming experience. This is further enhanced by AMD FreeSync Premium and G-SYNC Compatibility for smooth gameplay. Users can also relax in comfort with ergonomic features including HAS, Swivel, Tilt and Pivot to find the perfect playing position.

The Samsung Odyssey G85NB, G75NB and G40B gaming monitors will be available globally throughout June, with launch schedules varying by region.

You can join the discussion on Samsung's new Odyssey Neo G8, G7, and G4 Gaming Monitors on the OC3D Forums.

meuvoy
I take real offense on samsung and it's curved 16:9 monitors... Such great specs, such inefficient, atrocious and side viewing-destoying curve. I have no issues with ultra-wide curved monitors but I can't stand curved 16:9, makes no sense to me.Quote

Warchild
Quote:
I personally loved the curvature on it. Definitely one of the best monitors I had for a short time before upgrading even further. Most I hear complaining about the curvature never actually owned one. Its always the "I dont own one because I cant stand the curvature".Quote

Dicehunter
Quote:
Then don't buy it and get a non curved monitor instead, There's plenty to choose from.

I personally like curved monitors, I think they look great even at 16:9 resolutions.Quote
Reply