A lightweight, portable projector/speaker that promises excellent ease of use.

At CES 2022, Samsung has revealed something that's a little bit different. Their booth isn't just filled with monitors and TVs of varying sizes and screen types, it also has a new smart projector called "The FreeStyle", a smart projector that's designed to project onto almost anything.

While its $899 price tag and 1080p resolution may not be sufficiently high-end for some users, it is worth remembering that this product is designed to be portable, containing a built-in speaker while using the same Smart TV features as the latest Samsung televisions and far-field voice control. In short, this projector is smarter than other portable projectors. The FreeStyle is a projector, ambient light, and smart speaker (Built-in Alexa and Bixby) in one.

With a cradle that can offer 180-degree rotation, auto keystone, and auto levelling features, The FreeStyle can project to create screens that are up to 100-inches in size. Additionally, the device can adjust its projected screens as conditions change. If you don't have a white wall to project on, Samsung's FreeStyle will automatically adjust itself to make images look as they should (within reason).

External batteries that support USB-PD and 50W/20V output can be used to make Samsung's FreeStyle projector anywhere. With its built-in speaker, users of The FreeStyle can turn almost anywhere into a cinema, with the device supporting built-in streaming services through its Smart TV features and mirroring/casting from Android or iOS devices. The device also supports Micro HDMI, allowing users to connect PCs or games consoles to the projector.

Currently, Samsung's The FreeStyle is currently available for pre-order in the US for $899.99, with shipping for the device starting in February. What follows is Samsung's Press Release.

Press Release - Samsung Electronics Launches The Freestyle, a Portable Screen for Entertainment Wherever You Are

Samsung Electronics today announced the launch of its all-new portable screen and entertainment device, The Freestyle, ahead of CES 2022. The Freestyle offers first-of-its-kind technology and flexibility to deliver optimal viewing and entertainment for customers looking to bring video and audio content wherever they go. Targeted toward Gen Z and millennials, The Freestyle is a projector, smart speaker and ambient lighting device all rolled into one lightweight, portable device. When it comes to portability, The Freestyle weighs only 830 grams allowing to change any space into a screen with ease. Unlike conventional, boxy projectors, The Freestyle's versatile cradle allows rotation of up to 180 degrees, enabling users to show high-quality video anywhere - tables, floors, walls or even ceilings - no separate screen required.

"The Freestyle is a one-of-a-kind projector geared towards ultimate versatility and flexibility to meet the consumers' changing lifestyles," said Simon Sung, Executive Vice President and Head of the Sales & Marketing Team of the Visual Display Business at Samsung Electronics. "Without the limitation in space and form factor, The Freestyle is a fun and versatile device that can be used in any way consumers prefer." 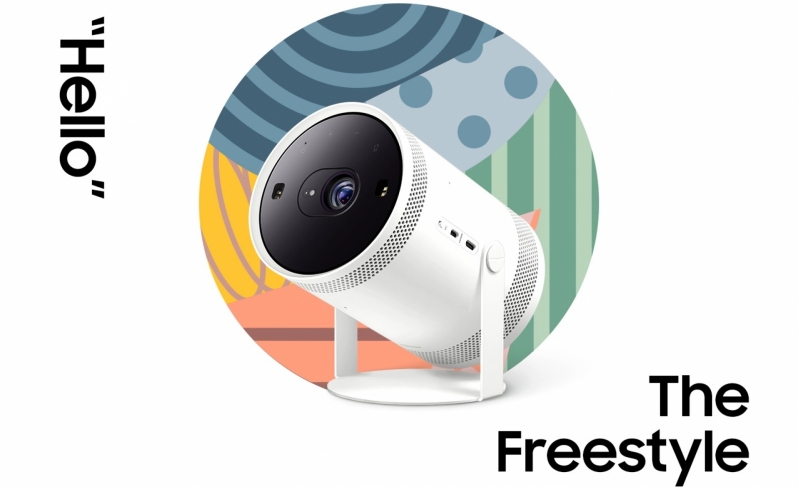 The Freestyle comes with full auto keystone and auto leveling features, enabled by industry-leading technology. The features allow the device to automatically adjust its screen to any surface at any angle, providing a perfectly proportional image every time. Additionally, the auto focus feature allows The Freestyle to display a crystal-clear image on any surface, at any angle, up to 100 inches in size. The Freestyle also comes with a dual passive radiator enabling a clean and deeper bass without distortion, and its 360-degree sound radiation allows customers to enjoy a cinema-quality sound experience no matter where they are.

For powering it up, The Freestyle is compatible with external batteries that support USB-PD and 50 W/20 V output or above, so users can take it with them anywhere, whether they are on the move, on a camping trip and more. The Freestyle is also a pioneer in that it's the first portable screen that works when connected to a standard E262 light socket without the need for additional wiring, besides compatibility with the traditional wall plug option.

When it's not used as a projector to stream content, The Freestyle also provides mood lighting effect thanks to its ambient mode and translucent lens cap. The Freestyle is also a smart speaker, analyzing the music to pair visual effects that can be projected on the wall, floors and anywhere else.

The Freestyle offers Smart TV features available on Samsung Smart TVs, with built-in streaming services and mirroring and casting features compatible with both Android and iOS mobile devices. It is the industry's first portable projector that is certified by global major OTT partners, providing customers with the best content viewing experience. It is also the first projector to include far-field voice control, allowing users to choose their favorite voice assistants when using the device hands-free.

You can join the discussion on Samsung's FreeStyle Smart Projector on the OC3D Forums.

KingNosser
It's a decent idea to integrate them features, but for me not at that price point.Quote

WYP
Quote:
I agree with you there. As a person who has to set up projectors regularly for the church I attend, a projector that autofocuses and is that easy to set up sounds awesome.

That said, for that much money, I won't be buying one. Definately a good product for some use cases.Quote
Reply