AMD has just launched their Radeon RX 6400 graphics card into the DIY PC market, bringing their ultra-low wattage RDNA 2 graphics cards to a new audience. This GPU has a TDP of 55W, making this graphics card the lowest-power discrete GPU within AMD's RDNA 2 lineup, and that has given AMDs AIB partners room to be creative.

While most manufacturers are simply rehashing their RX 6500 XT designs, Sapphire has taken a different approach. Sapphire has create a low profile graphics card that's single-slot and half-height. This allows their Radeon RX 6400 PULSE graphics card to fit into almost all desktop PCs, even some of the most compact or constrained units. If it supports half-height or full-height PCIe slots, this graphics card can fit inside your system.

AMD has targeted their Radeon RX 6400 at Nvidia's GTX 1050 Ti and GTX 1650 graphics cards, arriving as a higher performance option for the sub-75W GPU market. This GPU requires no external power connections, just the power from your PC's PCIe slot. This allows this graphics card to be easily installed within compact HTPCs, and other compact desktop PCs. 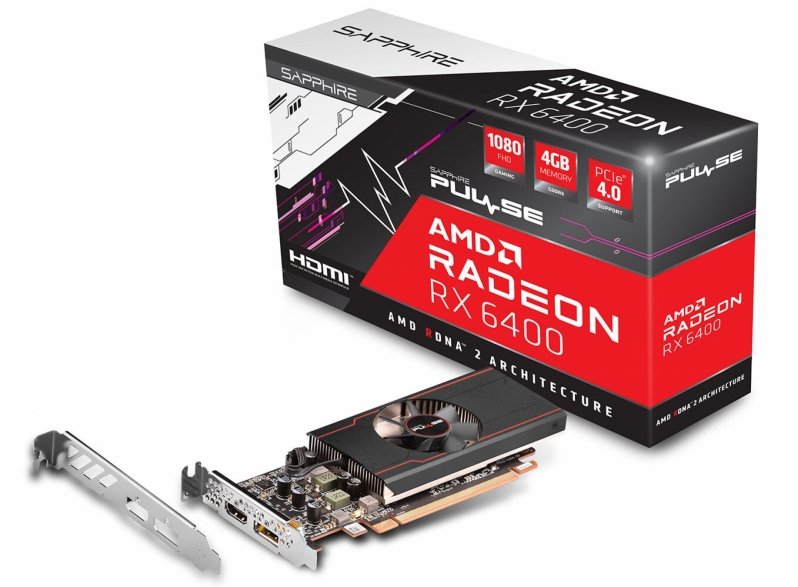 While AMD's Radeon RX 6400 is not an overly powerful graphics card, it is strong enough to play many popular titles at 1080p. The Sapphire RX 6400 is designed to fit into small form factors, consume little power, and deliver ample performance for many classic PC games. With the right settings, this graphics card will also run many modern PC games at 60+ FPS at 1080p.

The Radeon RX 6400 is a great entry point into the PC gaming market, especially if paired with a service like PC Game Pass (formerly Xbox Game Pass for PC). Don't expect incredible performance levels from this graphics card. That said, given its power draw and its size, the RX 6400 is an impressive GPU.

You can join the discussion on Sapphire's Radeon RX 6400 graphics card on the OC3D Forums.