Sapphire's Radeon RX 6900 XT TOXIC has leaked onto the web, and it boasts some impressive hardware specs. Thanks to Videocardz, we now have our first looks at Sapphire's new Radeon flagship, offering users a PCB that can handle up to 450 watts of power and a beefy 360mm closed-loop liquid cooler to ensure that the graphics card remains cool under load.

Based on the power inputs on this graphics card, Sapphire can push up to 450 watts of power into this graphics card, with 75 watts from a PCIe slot, 300 watts (150 watts each) from the GPU's dual 6+2-pin PCIe power connectors and an additional 75 watts from the GPU's 6-pin PCIe power connector. AMD's reference RX 6900 XT consumes 300 watts of power, giving this GPU access to a potential 50% increase in available power for overclocking.

Sadly, the GPU specifications of Sapphire's Radeon RX 6900 XT TOXIC remain unknown, though we should expect higher clock speeds than AMD's standard RX 6900 XT model. The images below also fail to show the display outputs that this new graphics card will offer, though we can expect to see HDMI 2.1 and DisplayPort 1.4 represented.

Sapphire is expected to officially reveal its RX 6000 series of TOXIC graphics card soon. We will report on the finalised specifications of these GPUs when they are released.

You can join the discussion on Sapphire's RX 6900 XT TOXIC graphics card on the OC3D Forums. 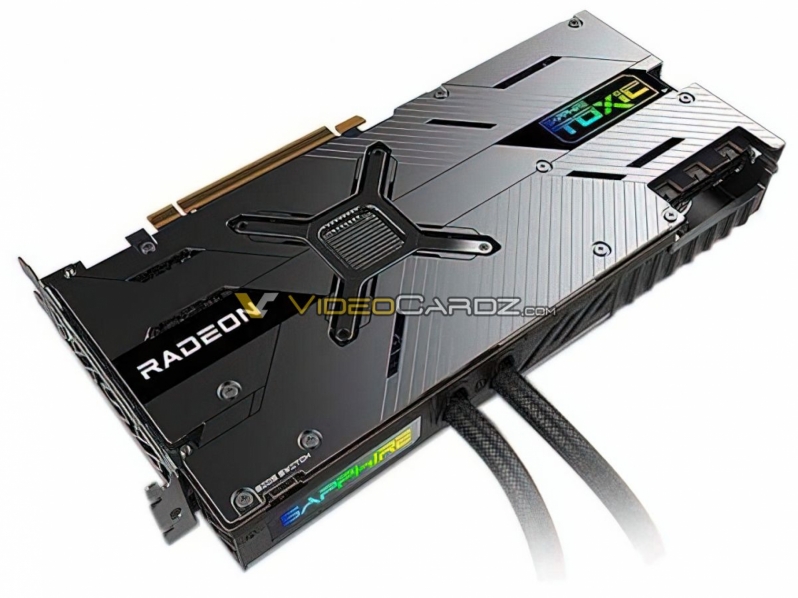 g0ggles1994
I mean; yes for more LC Radeon cards, but ones that aren't CLC? All I can find for Radeon water blocks are for the reference cards and nothing else.Quote

looz
Not many non-reference designs were sold I imagine.Quote

Bartacus
Quote:
Aquacomputer is making some blocks for non-reference models, and EK (yuck) will be too. I'm waiting on Aquacomputer for a block for my Asus TUF 6900XT, it's coming.Quote

spolsh
Quote:
Even fewer reference ones probably. I mean how many have actually sold now, a couple of hundred or something LOLQuote
Reply