Thanks to Videocardz, we have gotten a look at Sapphire's Radeon RX 6400 PULSE, a new RDNA 2 graphics card that will sit below AMD's RX 6500 XT. An ultra-compact graphics card that is single-slot and supports half-height PCIe brackets.

The benefits of Sapphire's RX 6400 PULSE are simple, the graphics card is compact and requires no external power to operate. This GPU requires no PCIe 6-pin or 8-pin connectors and can operate using power from your PC's PCIe lanes. That means that this GPU will consume less than 75 watts of power.

Given this GPU's compact size and low power requirements, this graphics card can be slotted into almost any PC without any issues. The GPU's HDMI 2.1 and DisplayPort 1.4 ports support modern displays, and the GPU's built in H264/H265 decoders make this graphics card useful for media playback (for an HTPC). That said, this GPU lacks video encoding capabilities of AV1 video decoding. This GPU is not a good choice for video transcoding. 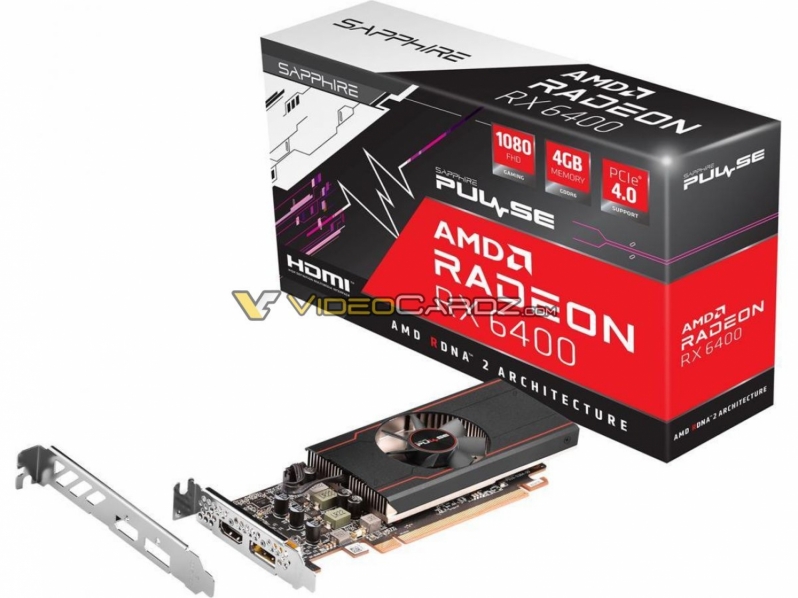 While Sapphire's  Radeon RX 6400 PULSE will not be winning many GPU benchmarks, the graphics card has enough power to run many modern titles. This is especially true for free-to-play games and many compatible online games. The GPU has 4GB of GDDR6 memory, 768 stream processors, and PCIe 4.0 support (x4 lanes).

If you have an old office PC that you want to play some games on, the Radeon RX 6400 should be a good option for you. That said, we are assuming that AMD will price this graphics card well. At this time, pricing has not been confirmed.

AMD launched their Radeon RX 6400 in January, but at that time the graphics card was exclusively for the OEM market. Now, it looks like the RX 6400 is coming to the DIY PC market. Let's hope that AMD prices this graphics card well, as the market needs a good ultra-budget option.

You can join the discussion on AMD's Radeon RX 6400 PULSE on the OC3D Forums.