An alleged Lenovo RTX 4090 graphics card has been pictured

It looks like Lenovo has started to prepare pre-build PCs with Nvidia's RTX 40 series graphics cards, with the image below showcasing what is alleged to be an RTX 4090 graphics card that is four slots thick and utilises a PCIe 5.0 16-pin (12+4-pin) power connector.

Below, we can see that Lenovo's custom RTX 4090 graphics card is so large that is barely fits inside their LEGION branded PC case. The sheer size of this graphics card supports claims that Nvidia's RTX 4090 GPU will feature a 450W TDP, making the graphics card as power hungry as an RTX 3090 Ti GPU.

Lenovo's RTX 4090 LEGION graphics card features a thick heatsink that is cooled by three fans and a PCB that takes up around two thirds of the graphics card's overall length. This design allows the GPU's third fan to push air though the graphics card and past holes within the GPU's backplate. This cooling design is commonplace for modern high-end graphics cards. 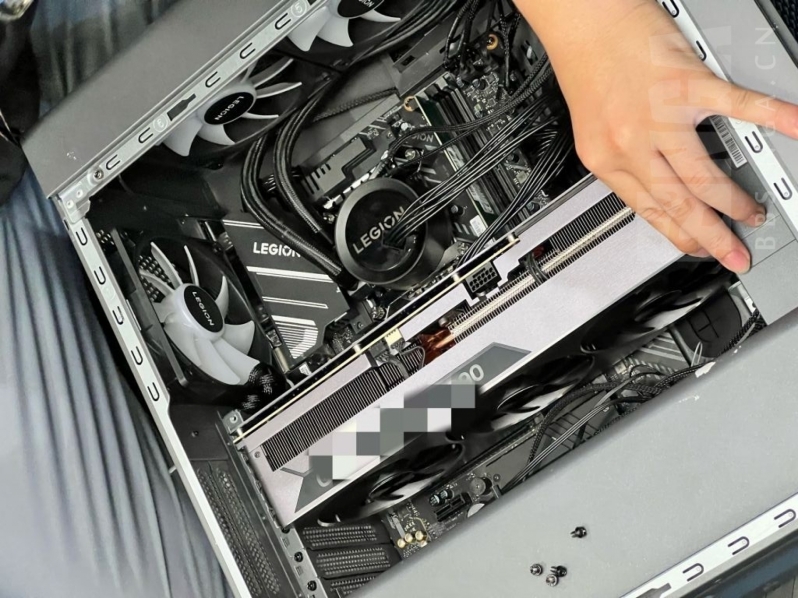 Nvidia is expected to reveal their RTX 4090 graphics card at their "Geforce Beyond" Special Broadcast on the OC3D Forums.

Warchild
looks like a triple to me. Basing my assumption on the guys hands and differents between knuckle at joint.Quote

AngryGoldfish
Quote:
It could be a triple in size but a quadruple in slots. As in, you wouldn't be able to fit anything in that 'fourth' slot even if the shroud only took up 2-4mm of it.Quote

One for the back plane, then three below and dipping into the 5th making it unusable.

The Zotac is the same. GN just showed it and said it was 4-5 slot.Quote

AlienALX
BTW if the pic is confusing ignore the slots at the back.

Slot 1 - power connector. It's dual slot up to where the heatsink is exposed, then over two more for the shroud.

This is what a 500w+ GPU cooler looks like.Quote

AngryGoldfish
Quote:
Unusable for who though? 4-way SLI was unusable six years ago, but people did it. Those that couldn't didn't. I don't see it any differently now. If these cards are gonna be £2500 and draw 500W of power in an age of electricity costing three times what it cost six years ago, and have so much powerful that most people have no use for, that's only going to be usable by a select few just as it was six years ago for 3 or 4-way SLI.Quote
Reply