Does this mean that the RTX 3090 Ti costs too much?

In time, we expect GPU pricing to normalise further, with lower-end GPU models achieving prices that are closer to their intended MSRPs. With next-generation graphics cards being expected later this year from both AMD and Nvidia, we know that both companies will want to clear their stocks of current-generation models before their next-generation counterparts replace them.

The end of GPU scalping?

Now that many graphics cards are readily available at retailers, there is less and less incentive for scalpers to buy up GPUs and sell them on eBay. Graphics card pricing on websites like eBay have fallen dramatically in recent weeks, as the availability of new graphics cards at retailers has given used GPU buyers no incentive to pay inflated prices. Today's GPU purchases are no longer fuelled by desperation, and that means that today's buyers can maximise the value of their purchases. 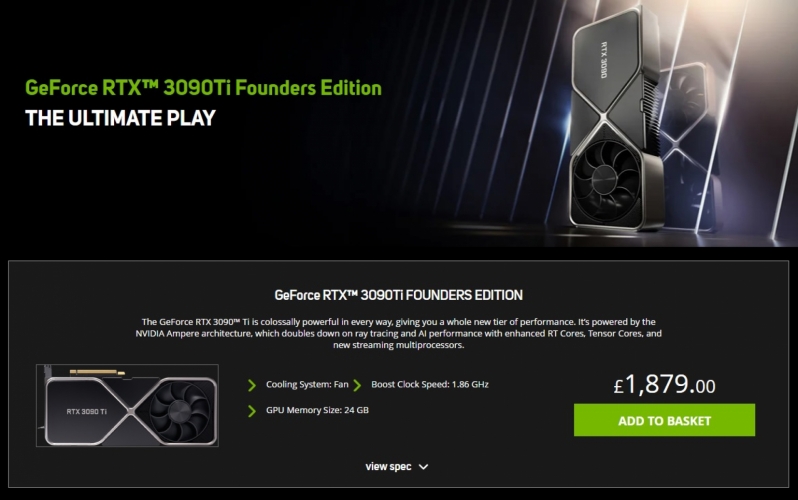 Will things get better for the low-end market?

As time goes on, we expect GPU pricing to normalise further. We expect the pricing of today's graphics cards to continue to lower, especially as the launch of new GPU hardware approaches. That said, it remains to be seen whether or not next-generation GPU launches will suffer from the same shortages as AMD's Radeon RX 6000 series and Nvidia's RTX 30 series.

You can join the discussion on Nvidia's RTX 3090 Ti and its pricing on the OC3D Forums.

KingNosser
It's not really a suprise tbh

What nvidia should be more concerned about is if they feel they can keep prices high next time around, well that'll go badly and most of there entire range will sit on the shelf.

One thing amd has a big advantage next time around imho is reduced costs of production on the chiplets.

3090ti sitting but they are so cheap at nearly 2k LULQuote

AlienALX
Quote:
That won't change anything. At all. They will still let Nvidia launch first, then cozy their prices right in line. So the only people that may benefit is them.

There is no competition in the GPU segment now. They just both take the raging pi55 as opposed to just one.

The only thing that will change this is a certain company with a blue logo.Quote

KingNosser
Quote:
I'm not so sure things would change drasticly, but Intel are already way behind and late to the party and as much as competition in any form is good they simply don't have anything ready to keep up with Nvidia or AMD's next generation, they haven't even launched a card yet so idk what price Intel were hoping for the public to pay for their card, but i feel Nvidia and AMD will squeeze them from being able to sell at a good profit.

But like all biz startup's in any area if you break even in the first 3 years ya not done bad.

AMD will make more profit, but they are able to reduce easier than the others prices if they actually want to compete this time around.

Intel being in 3070/ti teritory when the 7700XT if at a midrange price is going to be similar to a 6900XT well Intel are going to have to cut prices soon after launch it's already nearly may they best hope they sell plenty and fast cause the next gen are monsters in terms of performance.

Oh an lets not forget Raja LUL Seriously the best Intel can hope for is the lower end of the market least for now and while many people want Intel to do well it's only to bring down prices most of the people just want cheaper Nvidia cards. Personally I want AMD to bounce back like the past 5850x days and actually change the market like they did at the start of Ryzen, they have come a long way and since Raja left seem to be doing much better. As for Nvidia I simply just hate the way everything they do is a walled garden they are as bad if not worse than Apple.Quote

WYP
Quote:
The question is will it be cheap. AMD's chiplet design should be cheaper than an equivalent monolithic design, but they are also using that technology to make a BIG GPU.Quote

KingNosser
Quote:
Well I feel imho if they are going to be fair the 7700xt shouldn't be any more than £399 as for anything above that level it's hard to say where things will come out as being chiplet means they can have many tiers/skus of GPU's, also comes down to if they really want to compete as a whole and force the market like they did at the start of Ryzen.

I know I'm being harsh on Intel atm but they have at least started out on the right foot with their design it's just idk when they will have the performance for the next gen.

Cards are not just sitting while prices are falling they are sitting as most got fed up and now maybe 6months away from a new set of cards why would you buy now unless you really need it.

Either way I'll upgrade my CPU, but being honest I have no idea when i will upgrade my GPU I'm more likely to buy a new case and fill it with storage atm