Miners are selling up, and that has oversupplied the used GPU market

Used GPU prices have plummeted, and its only a matter of time before this impacts new GPUs

eBay, Facebook Marketplace, Gumtree, and other websites that deal in used products are now filled with graphics cards. The value of Bitcoin and Ethereum are decreasing, and rising electricity costs have made cryptocurrency mining less and less profitable. Now, cryptocurrency miners are selling off their hardware and cutting their losses, resulting in a flood of used graphics cards entering the market.

Today, we have found graphics cards on eBay that are well become their official MSRPs. The era of GPU scalping is over, and used GPU prices have fallen far below the pricing of GPUs at retailers.

Currently, GPUs are sitting on store shelves, and manufacturers are ow re-introducing game bundles to help increase demand. Even with that, GPU sales are slowing down, and the huge number of graphics cards on the used market is placing downward pressure on new GPU prices. It is only a matter of time before new GPU prices are further reduced if current trends continue.

On eBay, we found a ZOTAC Gaming RTX 3080 Trinity OC 12GB for £532. New, this graphics card costs £899.99 at Overclockers UK, highlighting how far GPU prices have fallen when compared to retail prices. 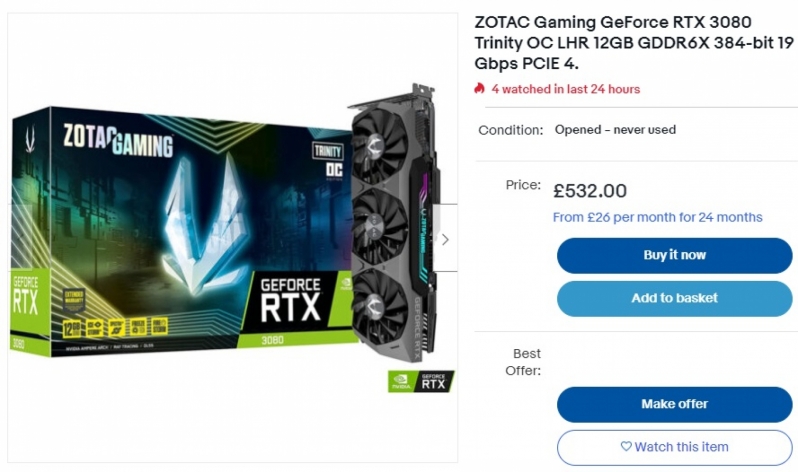 On the higher-end of the market, we have found an RTX 3090 Founders Edition with a buy it now price of £950. That's almost £500 below Nvidia's MSRP, and it is worth noting that auction pricing is often below this value. That's how far GPU prices have fallen within the used market.

As it stands, the used market is where the value is within today's GPU market. That said, many of these GPUs will have had a hard life mining, and many sellers of these used graphics cards have no feedback, giving purchasers little reason to trust many of these used GPU sellers. If you are willing to take a risk, today's used GPU market could reward you with some excellent graphics cards at gloriously low prices. That said, it cannot be denied that the used GPU market is a risky place after a crypto crunch. 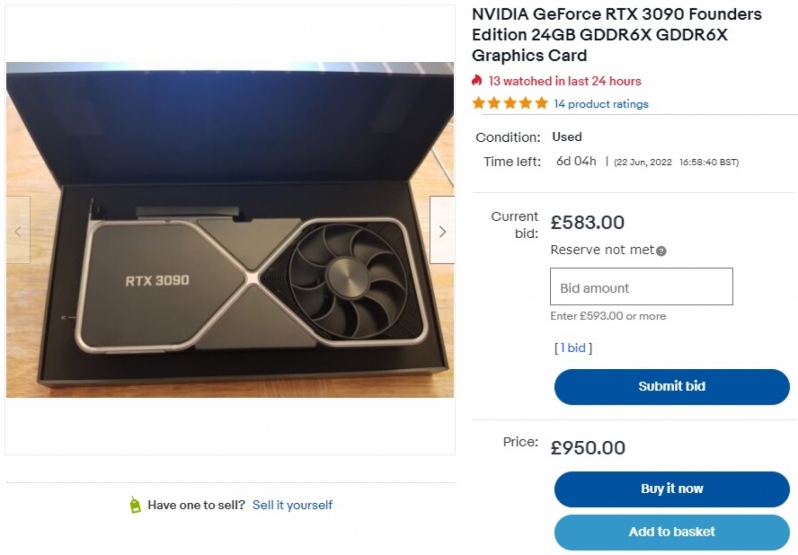 You can join the discussion on the collapse of used GPU prices on the OC3D Forums.

AlienALX
They have already started to.

Last week OCUK got in a batch of 6800XT triple fan gigabyte cards and they were £659 brand new.

Mining is dying. Now they have to compete with 90% of what they sold during the pandemic straight to miners.

I'm almost certain these are not gaming cards you are finding on the bay, because no one in their right mind who games would sell at that kind of loss unless they were packing up gaming for good.

It's also why I'm building another gaming pc with my spares. Selling would be nuts.Quote

Piskeante
Quote:
Mining is dead. But people are D*mb AF, and they don't realise the catastrophe that comes with ETH going PoS. Still, a lot of people investing following some youtube influencers that are telling them to continue buying.

In any case, i will laugh at them when they get rekt.Quote

AlienALX
Quote:
Yeah I have noticed quite a few videos pop up trying to get people to buy GPUs right now, this instant. Which is daft given this trend.

Had I not needed a custom cooled one I would have waited longer, but the model I needed was rocking horse poo as it is.

But yeah, seen the massive drop in the price of Bitcoin for example.Quote
Reply