VESA aims to tackle motion blur with their ClearMR Certification

If you are looking for a high-end television or monitor, companies will often market the motion clarity of their screens. Screens that offer strong motion clarity do not suffer from so-called "motion blur", where objects on screen can become blurry when in motion. Today, VESA has revealed a new display standard that aims to make future televisions and monitors that offer sharper in-motion detail, replacing the traditional "Motion Picture Response Time" (MPRT) characterisation to more accurately rate a screen's levels of motion clarity.

With VESA's new ClearMR standard, the standard body is making it easier for consumers to judge the motion clarity of TVs and monitors before purchasing them. If the screen's ClearMR rating is higher, it offers users less blur and more accurate imagery. Currently, VESA has created seven ClearMR performance tiers, each of which offers a "visually distinguishable" change ion motion clarity. The baseline ClearMR standard is ClearMR 3000. with ClearMR 9000 currently being the highest. Yes, this means that gamers and other screen enthusiasts will want a monitor/tv that's "Over 9000!"

VESA tests ClearMR displays using high speed cameras and specific test patterns to judge motion clarity as each test pattern moves from one frame to the next. These images are then compiled and analysed to create a display's ClearMR value.

Below is VESA's Press Release for their new ClearMR standard. 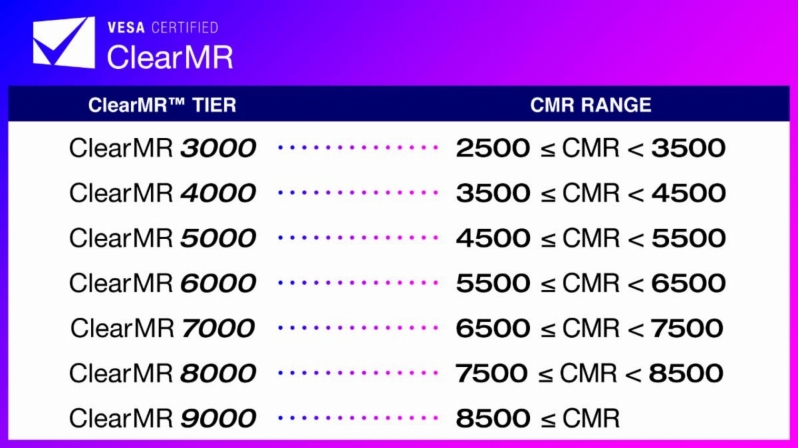 The Video Electronics Standards Association (VESA) today introduced the ClearMR Compliance Test Specification (ClearMR), an industry standard and logo program that provides a new quality metric for grading motion blur in digital displays. ClearMR is applicable to both LCD and emissive display products, including display panels, TVs, monitors, and computers with embedded displays, such as all-in-ones, laptops, notebooks and tablets. The new metric Clear Motion Ratio (CMR), as defined in the ClearMR standard, provides a clear numerical value based on the ratio of clear pixels to blurry pixels, which enables consumers to easily compare the amount of motion blur between VESA Certified ClearMR displays. CMR replaces Motion Picture Response Time (MPRT) and other methods of blur characterization since these other metrics do not accurately reflect the true nature of blur.

"With ClearMR, VESA is providing the electronics industry with an open standard that gives consumers the confidence in knowing that they are purchasing a TV, notebook or monitor that meets the most well-defined set of blur criteria," said Dale Stolitzka, senior principal researcher at Samsung Display's America R&D Lab and lead contributor to ClearMR. "Backing VESA's ClearMR standard with a logo program will enable buyers to feel confident that they're getting a display with the clearest depiction of action for the utmost in viewing pleasure."

Current methods, such as MPRT, fail to reflect the true nature of blur because a solely time-based metric cannot account for a number of image enhancement and blur mitigation techniques, such as excessive overshoot and undershoot, which can create artifacts and distortions that negatively impact image quality. VESA's ClearMR standard and logo program limits the use of these enhancement techniques during testing—enabling consumers to make a fair comparison of motion blur quality across VESA Certified ClearMR display products.

The VESA Certified ClearMR logo features multiple performance tiers—from ClearMR 3000 up to ClearMR 9000—where each represents a range of blur performance based on the ratio of clear pixels versus blurry pixels as a percentage. ClearMR 7000, for example, is defined as a CMR range of 65-75 times (6500 to 7500 percent) more clear pixels than blurry pixels. Each tier provides a visually distinguishable change in clarity, with higher CMR numbers indicating higher image quality and less blur. Only displays that pass all ClearMR compliance tests can qualify for the VESA Certified ClearMR logo.

"Samsung Display has no doubt that consumers will have a much easier time in selecting their TVs, monitors and laptop displays now that the display industry has coalesced around a more exacting quantification of motion blur," stated Hojung Lee, vice president and head of Mobile Display Product Planning Team at Samsung Display. "We applaud VESA's global standardization of the Clear Motion Ratio metric in ClearMR, a specification for blur-free viewing that we fully support, and to which we have already certified our newest OLED display."

According to Seok-ho Jang, vice president and head of the IT development division of LG Electronics (LG), "We believe that with VESA launching its ClearMR standard in the rapidly growing gaming market, we can expect to see even greater innovation in the gaming monitor categories. We are proud that the LG UltraGear brand will be involved from the very beginning with the acclaimed LG UltraGear 48GQ900, 32GQ850 and 27GP850 models, the first monitors to receive certification in the VESA Certified ClearMR logo program through a VESA authorized test center. LG will continue to collaborate with VESA to ensure that our monitors not only meet the high standards demanded by VESA's performance tests, but are also well equipped to satisfy the expectations and diverse needs of today's consumers."

Products undergoing ClearMR certification are tested using a digital high-speed camera, which takes pictures of a test pattern moving across the screen as it changes from one frame to the next. A luminance measuring device, such as a colorimeter, is used to verify pattern luminance. The pictures are compiled into a profile and analyzed to provide a repeatable and objective CMR value.

Products are tested at ambient room temperature in their default power-up configuration and native-screen resolution at maximum frame rate after a warm-up period. Backlight strobing is disabled during testing in order to establish a level playing field and prevent unfair comparisons with products that do not utilize those blur reduction methods. Limits are also placed on overshoot and undershoot during product testing so that the overall visual performance is not compromised in an effort to reach a specific numerical target.

ClearMR tests work independently of the panel technology in display products, and thus can be used on any display technology, including LCD and OLED, for any display, monitor or product with an embedded display. Display vendors wishing to participate in the VESA Certified ClearMR logo program can send their products for testing at any of VESA's approved Authorized Test Centers (ATCs).

The ClearMR specification and logo program can be used with high dynamic range (HDR) products; however, the current version of the specification requires products to be tested in standard dynamic range (SDR) mode for certification. VESA is currently working on an update to ClearMR that will enable testing in HDR mode, which will be released in the future.

You can join the discussion on VESA's new ClearMR display certification on the OC3D Forums.