Let's face it, the HDMI ecosystem is a mess. Manufacturers can advertise products as being HDMI 2.1 compatible without supporting the entire HDMI 2.1 feature set (as most HDMI 2.1's features are optional) and things only get worse when you start buying cables. Some cables do not support the full bandwidth of HDMI 2.1, despite being advertised as such, and things only get more challenging if you search for longer HDMI cable lengths.

With DisplayPort 2.0, VESA plans to certify video sources, displays, and cables that support their DisplayPort Ultra-High Bit Rate (UHBR) standard. This standard is what enables the higher bandwidths available through DisplayPort 2.0, a standard that will make 40 Gbps and 80 Gbps cables a reality.

VESA hopes to avoid confusion by making it clear how much bandwidth specific cables and devices support, making it easier for DisplayPort users to purchase the cables and devices that they need. This will make the DisplayPort 2.0 ecosystem a lot less confusing than the HDMI 2.1 ecosystem, though it remains to be seen how effective this certification process will be. While the image of labelled cables below is encouraging, VESA doesn't appear to be forcing such labelling on real-world products. 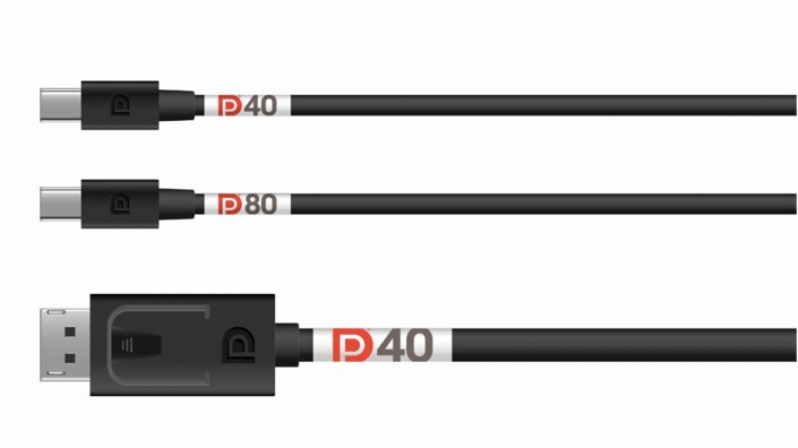 "The ultra high bit rates supported with the DisplayPort 2.0 specification bring a whole new level of display performance and experience to the consumer," stated James Choate, compliance program manager for VESA. "By establishing the UHBR Certification Program, we hope to speed adoption of higher-performance video and display products across the ecosystem. We expect results from this program to be similar to the success achieved with other VESA certification programs, including those that have enabled widespread ecosystem adoption of products supporting DisplayPort HBR3 bit rates, as well as the DisplayPort Alt Mode and DisplayHDR specifications and standards."

Choate added, "No matter how high the performance of your graphics card and monitor are, the resulting image quality can still be limited by the cable used to connect those devices. Thanks to improvements in both the DisplayPort connector and cable design, the new VESA certified DP40 and DP80 UHBR cables enable consumers to get the highest performance possible from their VESA certified devices. These new cables are backed by VESA's UHBR Certification Program, which provides added assurance that if your cable has the DP40 or DP80 logo from VESA, it will meet the specs for the highest data rates supported by current and future products certified by VESA."

You can join the discussion on VESA's DisplayPort 2.0 certification plans on the OC3D Forums.

NeverBackDown
I just wish more products outside of PC used DP. It's just a better standard all around.

I am glad to see that it's less confusing on the other hand. HDMI cables are a nightmare to sift through to find a good one.Quote

NeverBackDown
From what has been talked about end of this year seems like to be the time frame of products with it available. With COVID it took massive delays to production as they spent their time producing things they already were making with the demand being what it is.Quote
Reply