Expect Nvidia to reveal their RTX 3080 Ti and more!

Later tonight, Nvidia will be hosting their Computex 2021 Keynote. Here, Nvidia will use this event to highlight "The Transformational Power of Accelerated Computing, From Gaming to the Enterprise Data Center", and we will most likely see Nvidia release new RTX hardware, reveal new RTX enhanced games and more.

Nvidia has specifically mentioned that this event will highlight "Gaming", suggesting that Nvidia's long-rumoured RTX 3080 Ti and RTX 3070 Ti GPUs may be revealed during their keynote. Furthermore, Nvidia's Jeff Fisher, the company's Geforce Senior Vice President, will be presenting during the keynote. Earlier today, Zotac confirmed that this would be the case, much to the dismay of Nvidia's PR department.

Earlier this year, Nvidia's Jeff Fisher revealed Nvidia's RTX 3060 graphics card, and history will repeat itself at Computex with Nvidia's RTX 3070 Ti and RTX 3080 Ti. Bethesda has also been teasing a DOOM Eternal Reveal tonight, suggesting that Ray Tracing is coming soon to the game.

Nvidia's Computex Keynote will be presented at 10 PM PDT on May 31st, translating to 6 AM UK time (June 1st), 1 PM Taiwan Time, and 7 AM CEST (June 1st). Below is a comment from Nvidia's CEO, Jensen Huang, regarding the keynote.

You can watch Nvidia's Computex 2021 keynote below.

Most, if not all, of us are familiar with NVIDIA, the company that invented the GPU and is synonymous with PC gaming. NVIDIA is also the leader in the AI industry, with the GPU and accelerated computing driving innovations that are reshaping industries around the world. Their keynote is timely and will provide invaluable insight to COMPUTEX participants on how these technologies will shape the world and drive success in the years ahead.

You can join the discussion on Nvidia's Computex 2021 Keynote on the OC3D Forums. 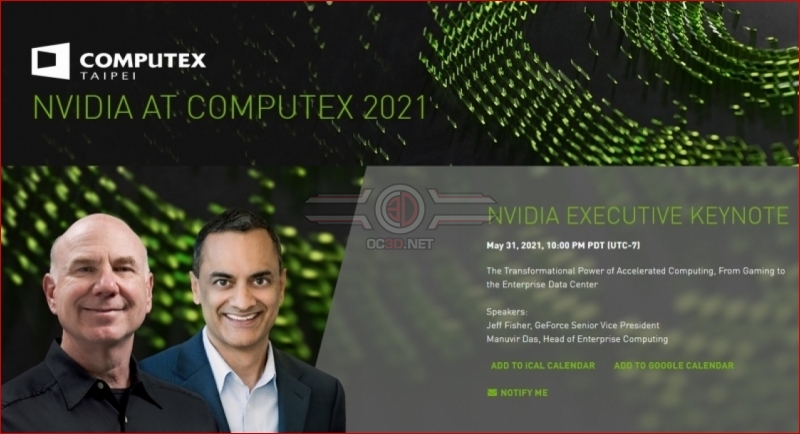