Maybe you shouldn't add #PcGaming to a mining-focused post

Zotac Gaming has made what is likely to be the most tone-deaf tweet of any hardware manufacturer in 2021, promoting cryptocurrency mining while sharing an image of eight Geforce RTX graphics cards mining Ethereum. Eight graphics cards that are not in the hands of PC gamers.

It isn't easy to be a hardcore gamer these days. Next-generation games consoles and PC hardware remain in short supply. The cryptocurrency mining craze has practically removed all current and last-generation GPUs from both the new and used markets. PC gamers are hungry for new graphics cards, making the backlash against Zotac's post understandable, as those eight graphics cards could satisfy eight PC gamers instead of the single cryptocurrency miner who is "hungry for coin".

While Zotac Gaming has deleted their Tweet, the anger that it has caused online remains. Zotac Gaming was actively promoting cryptocurrency mining, and that is a betrayal of PC gamers.

Right now, no graphics card is sold at their MSRP pricing. The profitability of graphics cards through cryptocurrency has caused their value to skyrocket, turning a gaming-focused product into a profit-focused miner. Some gamers have said that they are "Never buying any ZOTAC product again", and that's what happens when Zotac Gaming doesn't put gamers first. 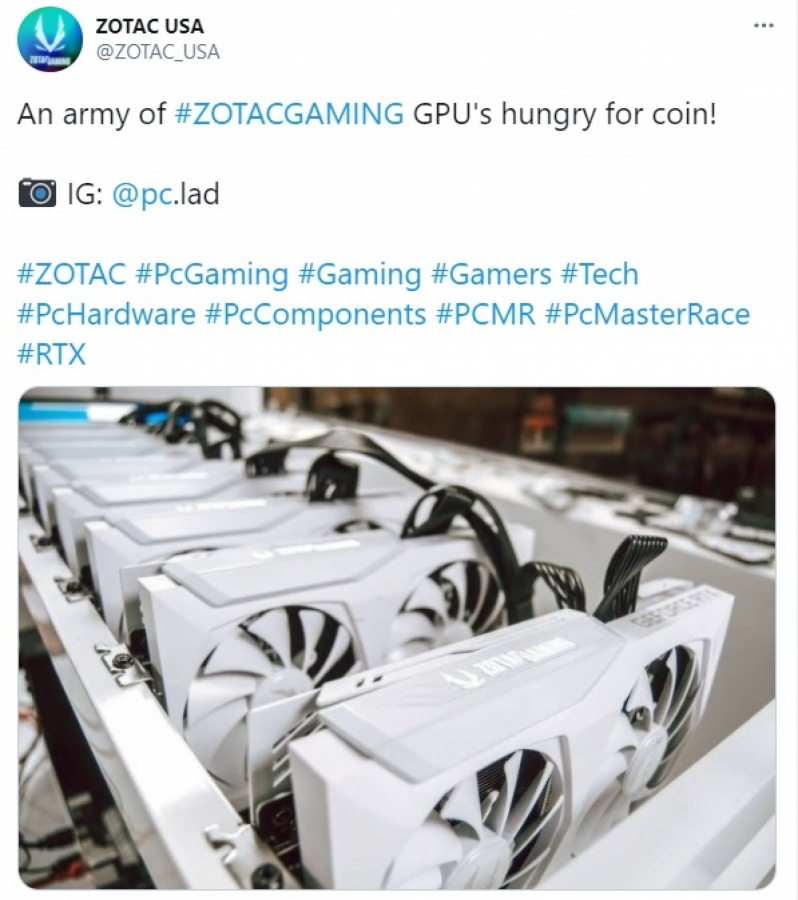 You can join the discussion on Zotac Gaming backtracking on its cryptocurrency mining promotion on the OC3D Forums.

23RO_UK
Well that's what you might call a Corporate f*ck up of the highest order especially in the current lack of hardware climate.

Yup, Zotac you score an unprecedented 20 out of 10 for dropping that bollock.Quote

ImprovizoR
It's not a f*ck up. It's not like Zotac will suffer any financial consequences for this. If anything, they'll attract exactly the type of customer that they clearly want. It's capitalism. They don't give a crap who they sell to as long as they sell. This is not newsworthy.Quote