On the company's website, Zotac has revealed the official pricing of several RTX 4090 models, all of which sit close to Nvidia's $1,599 MSRP. Zotac's RTX 4090 Trinity model will be available at Nvidia's MSRP price, while its OC variant will carry a $50 premium and their higher-end RTX 4090 AMP Extreme AIRO model will cost $100 more.

With this generation, it looks like graphics cards manufacturers and retailers will stock closer to Nvidia's MSRP pricing, a factor that is likely due to the crash of last-generation graphics card prices and the practical elimination of cryptocurrency mining from GPU demand.

This generation, Nvidia has to rely on gamers and creators to purchase their GPU hardware. Graphics cards are no longer hugely profitable for cryptocurrency mining, and rising energy costs are making things worse for miners. With this in mind, Nvidia cannot rely on insane demand to keep GPU prices high, especially now that the world is experiencing an economic downturn. 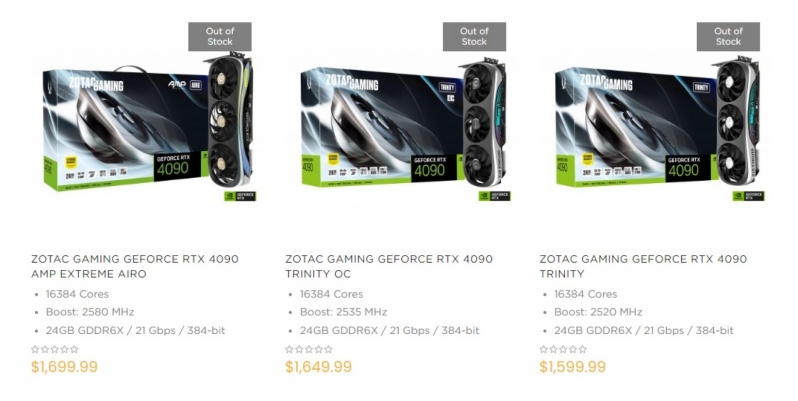 While The MSRP pricing for Nvidia's RTX 4090 graphics cards are high, it is worth remembering that the premium for overclocked and other premium GPU models were much higher than $100 for last-generation graphics cards. This generation, GPU pricing appears to have levelled off, though it remains to be seen how much these GPUs will cost a on launch day at retailers. All we can say is that now Zotac has revealed their official US prices, consumers should not accept anything higher than this for these products.

You can join the discussion on Zotac's RTX 4090 pricing on the OC3D Forums.

AngryGoldfish
I really am curious to see what Zotac's profit margins are on these. I know Zotac aren't solely graphics card manufacturers, but that is what they're primarily known for. After what happened with EVGA, I would love to be a fly on the wall in a Zotac meeting room.Quote
Reply