Elgato's new Stream Deck + is a game-changer for productivity

Control your setup with taps, swipes, and turns

Elgato's Stream Deck product line is incredibly popular, inspiring a new product category that is filled with imitators and rivals. Today, Elgato has revealed their new Stream Deck +, a new control interface that is equipped with LCD keys, dials, and touch strips, a combination that allows users to control more apps and to control their apps with a faster, smoother, and more versatile interface.

Not everything maps well to buttons, and that is why Elgato's new Stream Deck + offers users a touch strip and dials in addition to Elgato's standard Stream Deck buttons. Whether you are editing photos, streaming video, or creating any kind of content, Elgato's Stream Deck can be used to accelerate your workflow with app plugins, custom shortcuts, and more.

For podcasters, the addition of dials will allow users to control multiple sound sources with ease, and with connectivity though USB Type-C, this device can easily connect to both PCs and Macs. Regardless of your setup, Elgato's Stream Deck Plus can be a valuable addition.

Thanks to dedicated app plugins and Elgato's Stream Deck SDK, it is easy for most Stream Deck users to integrate Elgato's control interfaces into their workflows. Developers can even create their own plugins to accelerate specific tasks.

Stream Deck + adds new functionalities to the acclaimed Stream Deck platform with a combination of eight LCD keys, four push dials, and a dynamic touch strip, all of which are ideal for controlling audio, video, lighting, and other software-integrated technology. With over 100 ready-made app plugins available, and the option to map keyboard shortcuts to keys and dials, Stream Deck + enhances any workflow from content creation, podcasting and live production to photo editing, graphic design, and beyond. Stream Deck + integrates seamlessly with Elgato software, namely Camera Hub, Control Center and the lauded Wave Link virtual mixer, which is unlocked for all Stream Deck + owners to enjoy professional control over multiple audio sources and VST effects such as EQ, compression, or reverb. Both the LCD keys and touch strip can be personalized with Elgato's extensive library of icon packs and backgrounds, while the dials can be refitted with silver or gold caps (sold separately). Like all Stream Deck devices, Stream Deck + gives users access to thousands of royalty-free tracks and sound effects that can be triggered with the LCD (interactive) keys. When connected to a PC or Mac via the included USB-C to USB-A cable, Stream Deck + becomes the core of any setup. 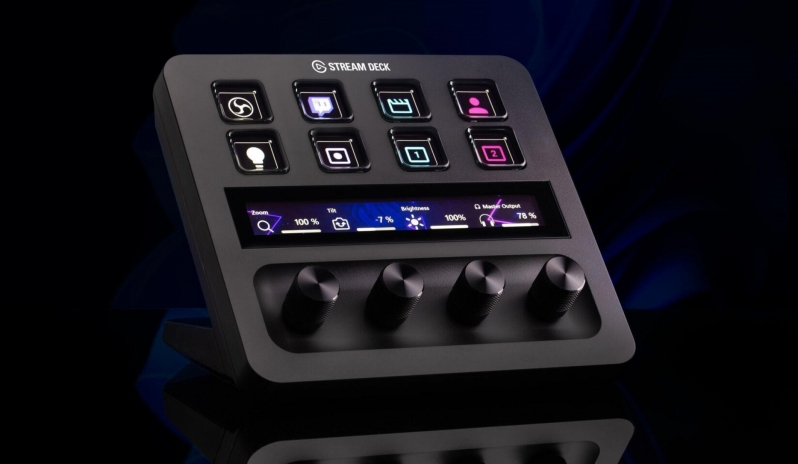 "Stream Deck has evolved into an indispensable platform for all types of digital professionals. Every month, Stream Deck users execute hundreds of millions of actions with their devices to make their workflows more powerful and intuitive, often in unexpected and ingenious ways," said Julian Fest, SVP and GM of Elgato. "With Stream Deck + and the introduction of new physical inputs, we're giving our customers even more ways to personalize how they control their setups, further positioning Stream Deck as a powerful extension beyond keyboards and mice. We can't wait to see our community put Stream Deck + to work."

Stream Deck + leverages powerful Stream Deck software that makes configuration and daily use easy. Simply drag and drop plugin actions onto the LCD keys and dials. You can even create limitless pages of interface layouts with different actions for application- or task-related workflows. One tap of an LCD key can trigger single or multiple actions: start stream, play intro sequence, unmute mic, turn on lights, switch cameras, launch apps, open webpages, and so on. Dials are used to adjust volume levels, image details, camera zoom, brightness, white balance, or just about any incremental app settings. Multiple actions can be "stacked" on single dials and pushing the dial will cycle through the actions. Real-time dial information is displayed on the touch strip, which can also be tapped to trigger actions, or swiped to change interface layout pages. Stream Deck + can even be set to automatically change interface layouts as you jump between apps. 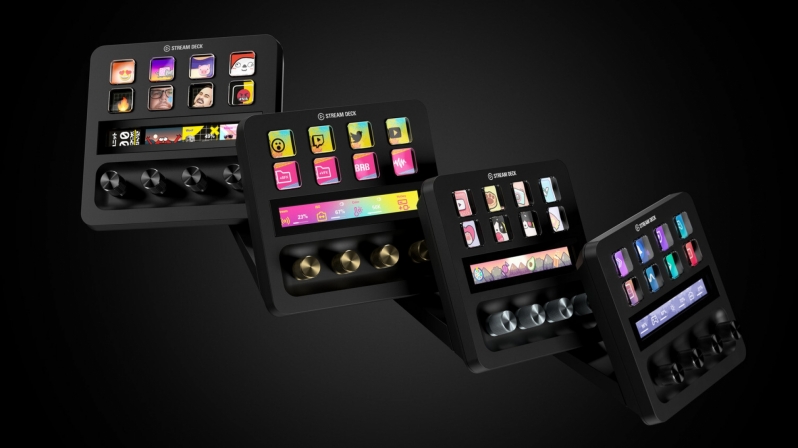 Elgato and its global community of passionate developers are continually building new plugins thanks to Stream Deck SDK, creating infinite possibilities for the entire Stream Deck range and empowering users to streamline their workflows.

Elgato Stream Deck + is available immediately from the Elgato and CORSAIR worldwide network of authorized retailers and distributors.

Elgato Stream Deck + is backed by a two-year warranty and the CORSAIR & Elgato worldwide customer service and technical support network. In the US, Elgato's Stream Deck + will cost $199.99.

You can join the discussion on Elgato's Stream Deck Plus on the OC3D Forums.