Do you have fond memories of the original Xbox controller?

To complete the Classic Xbox experience on the Xbox One/Xbox One X Microsoft is bringing back the Duke, the original Xbox's oversized controller design that is both adored and despised by Xbox fan depending on their preference. This controller will be built by Hyperkin and will launch with a price tag of $69.99 this March with USB connectivity and support of both PC and Xbox One.

The two significant changes to the new "Duke" controller is the addition of two bumper buttons, which will allow the controller to support modern games and an OLED display that will play the classic Xbox start-up animation whenever the screen is pressed. At this time it is unknown if this screen will be able to serve any other purpose in-game. 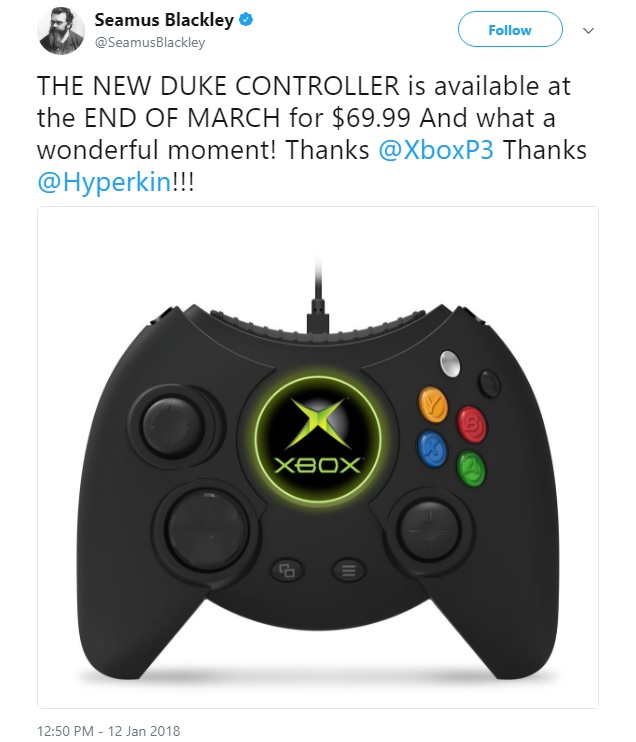 One of the critical aspects of this controller is its size, a curse for those with small hands and a blessing for those large ones. One common complaint about the current Xbox One controller is that it is too small for some users, making the addition of a larger alternative an attractive offering for some Xbox One users. The only problem with this design is that it is expensive, leaving many to question why the integrated OLED display is necessary.

You can join the discussion on the Xbox One's "Duke" controller returning to market on the OC3D Forums.

AlienALX
Still got a crystal ltd ed one haha. And a see through green Xbox with LEDs

Eddie long
Quote:
Still got my original xbox and controllers too and I wouldn't part with it