Hmm, these look a lot like G.Skill's Trident-Z memory

Does your PC's memory lack support for RGB lighting? Do you want RGB memory without investing in a new kit of DDR4 modules? Akasa might just have the solution for you.

Now let's get this matter out of the way. Yes, Akasa has taken a lot of the design of their "Vega RAM Mate" RAM LED kit from G.Skill's Trident Z series of memory modules, and No, Akasa did not work with G.Skill to create their memory kits. In effect, these kits will create what could be described as fake G.Skill memory.

The idea behind these kits is simple, sandwich an RGB LED strip between two metal place, each of which sits at either side of a DDR4 memory module. This kit supports all 30mm tall DRAM modules and supports single and double-sided DDR, DDR2, DDR3 and DDR4 memory. Yes, you can use this kit to add RGB memory to your ancient DDR-powered PC. 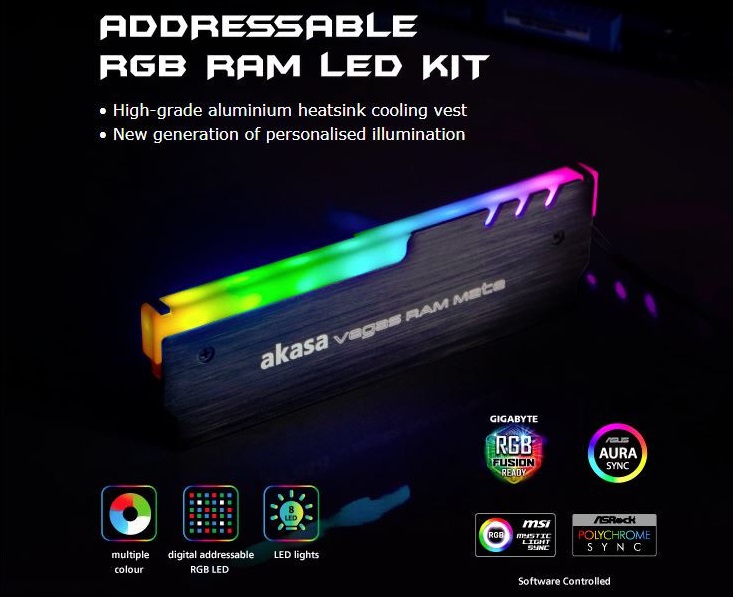 Akasa plans to sell their Vegas RAM Mate DDR memory heatsink and lighting kits in two module packages. At this time we do not know the release date or retail pricing of Akasa's new DRAM lighting solution.

You can join the discussion on Akasa's Vega RAM Mate DDR Heatsink/Lighting kit on the OC3D Forums.

AlienALX
How funny, they seem to be exactly the same as the Chinese ones I bought recently.

Dawelio
So what?... Are these actual memory sticks or just ”fake” ones, ie like Corsair made sticks that will just ”fill out” empty memory slots on your motherboard?.Quote

AlienALX
Quote:
Neither. They are coolers you fit to bare ram modules.Quote
Reply